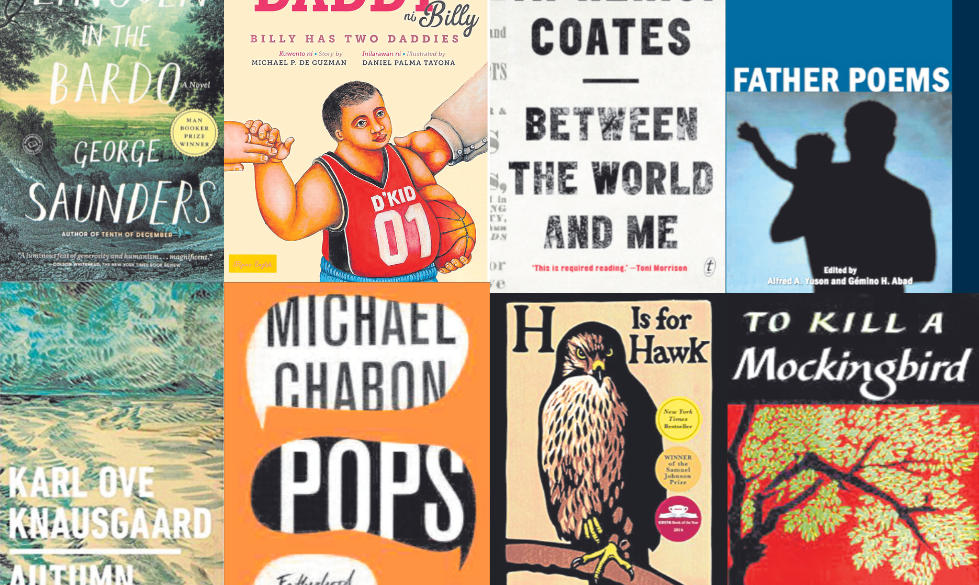 Whether fiction or nonfiction, whether happy or sad, books about fathers are often powerful—and unexpected. The very idea of fathers have inspired fathers to write to and about their sons and daughters—and vice versa.

These books run the entire spectrum of experience, from love to loss, from despair to hope. They run the length of time, from a glimpse to a lifetime. One thing is for sure: Just like our fathers—or the mere memory of them—they are unforgettable. Here are our picks for 10 books about fathers, arranged alphabetically by title:

A critically acclaimed and bestselling author, Knausgaard presents his best book so far, translated by Anna Baird, and part of an autobiographical set of books set to the seasons.

This 2017 book begins with Knausgaard writing a letter to his unborn daughter, about his fears and his hopes, all wrapped up in his observations of daily life—exactly the kind of thing you leave behind to a child you hope to inspire.

‘Between the World and Me’ by Ta-Nehesi Coates (One World)

No one writes quite like Coates, who also, incidentally, reinvented the Black Panther for Marvel Cinematic Universe (yes, that Black Panther).

This 2015 book won the National Book Award and is structured as a series of essays/letters to his teenage son, but in the poetic language and with the mythic depth that characterizes Coates’ works, tackling the difficult relationship America has with race.

A truly groundbreaking children’s book that normalizes having same-sex parents, this book has both Filipino and English text, but most of all, it has the heart of the late De Guzman’s writing and the gentleness of the late Tayoma’s art.

This is a book for the father who seeks a better world—and its very existence is a start.

In 2004, these two poets (one of them just recently proclaimed National Artist for Literature) launched this very book on Father’s Day. It is an enduring artifact for the affection and influence Filipino fathers have for their children—and vice versa—and how talented our poets are. “Father Poems” collects 85 poems of fathers by 60 poets.

This is one of the most unique books on this list. In a graphic memoir, Bechdel (she of the Bechdel test) recalls her difficult relationship with her father. Do not take the “Tragicomic” part lightly.

Bechdel’s father taught English and ran a funeral home—the “Fun Home” in the title—but shortly after Bechdel comes out as lesbian, she finds out her father is gay and soon he dies, and Bechdel is left with the broken pieces and remnants to put together. This 2006 graphic memoir was adapted into a successful Broadway musical (Lea Salonga was in it).

‘H is for Hawk’ by Helen Macdonald (Grove Press)

Universally acknowledged as one of the best books of 2016, “H for Hawk” follows the naturalist author as she suffers through the grief of her father’s death. She turns to raising the very dangerous bird of prey, the goshawk, one named Mabel. Just what can raising a vicious animal have in common in surviving the loss of a loved one? Let Macdonald show you.

‘Lincoln in the Bardo’ by George Saunders (Random House)

Set in 1862, just as the Civil War is getting going, this Man Booker Prize winner shows President Abraham Lincoln as he loses his 11-year-old son Willie and then, going beyond the factual details of history, imagines Lincoln communing with the spirit of his dead son through the Tibetan ritual known as the bardo. It is both bracing and touching, daring to ask, when does hanging on end and letting go begin?

This 2018 book of essays from the author of “The Amazing Adventures of Kavalier and Klay” will surprise readers because Chabon is really more of someone who deals with wordplay rather than high-end concepts. But the seeming absurdity of “Pops’” premise belies how good it is. Chabon wrote a 2016 GQ piece about going with his son Abe to Paris Fashion Week, bored all throughout. But it turned out Abe really was serious and was good at this fashion thing, and Chabon noticed, beginning a series of essays about it. Those are the essays in “Pops” (including the GQ piece), emphasizing how our children can surprise us and—in the process—improve us. ‘Soaring Saturdays’ by Sophie N. Lee, illustrated by Aaron M. Asis (Scholastic Asia)

After winning the 2014 Scholastic Asian Book Award for a young readers novel, Lee turns her talents to a picture book that celebrates the simple, bucolic bonding between a father and a daughter with Asis’ lovely illustrations. Sarah’s father is a postman, and every Saturday, she accompanies him on his bicycle as he goes around the town to deliver the mail. It is a poignant ritual told mostly in images and emotion.

‘To Kill a Mockingbird’ by Harper Lee (Harper Perennial)

Perhaps the most elemental of father-daughter books, “To Kill a Mockingbird” was first published in 1960 but remains one of the most important books in literature. Not only does it show the noble lawyer character in Atticus Finch, but the respect and love the narrator, 10-year-old Scout, has for her father, something that only grows as the trial progresses. While the book is a courtroom drama, it is a character study (Scout is clearly a stand-in for Lee, and she based much of the book on her hometown in Alabama), and most of all, the father and daughter characters are part of why “To Kill a Mockingbird” endures.