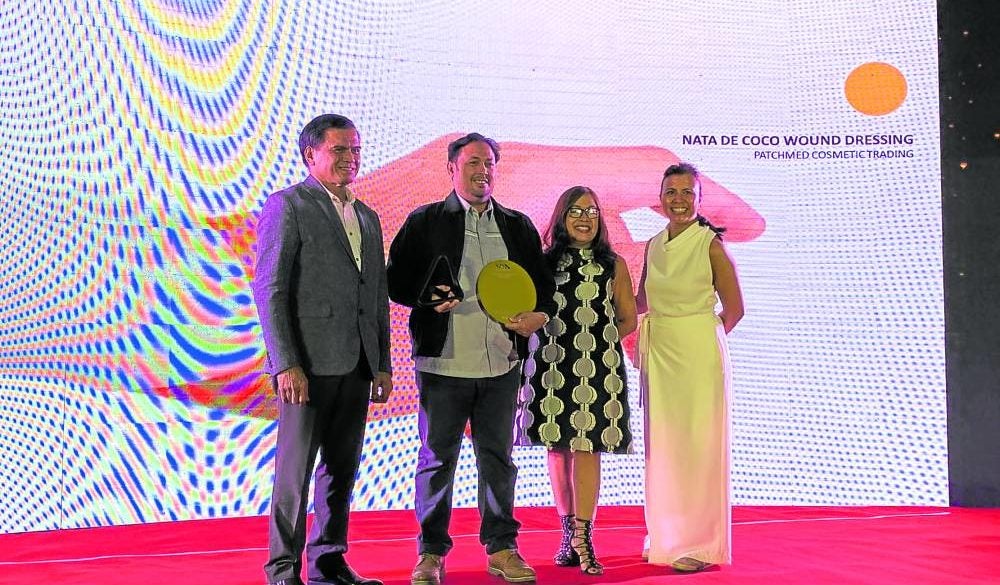 An affordable wound dressing made out of a special breed of nata de coco was given the Malasakit Award, or the Grand Prix, of the Good Design Award (GDA), held at Ayala Museum last week.

CocoPatch, a natural wound dressing made of coco cellulose, designed by Filipino nurse Denver Chicano received the highest recognition conferred by GDA for “exemplifying design excellence and having the most impact in addressing the United Nations’ Sustainable Development Goals.”

A total of 161 design entries from agencies, enterprises, startups and organizations were submitted to GDA. On Tuesday last week, 13 entries that showcased form, function and innovation were recognized by GDA.

The Malasakit Award and Gold Award went to Chicano, whose nata de coco wound dressing was born out of compassion for lower-income patients at Philippine General Hospital (PGH).

“I’m a nurse by profession, and I had this idea when I was still working at the PGH burn unit,” he said during the awards ceremony. “Everything starts from malasakit, because every time I see a patient at the PGH, it’s heartbreaking that they don’t have the money to afford treatments.”

He added that something as simple and essential as a synthetic wound dressing—which is supposed to provide relief—can be surprisingly costly for lower-income Filipinos. Synthetic wound dressings can cost P900 and above, and is obviously unaffordable for minimum-wage earners who badly need it.

“It triggers me that even a single piece of design product that can give them comfort as well as convenience for their family [is unaffordable],” he said.

Chicano eventually left PGH and developed CocoPatch, which is carried by PatchMed.

“I started this way back. I was even called an albularyo, a quack doctor. I was asked how I made nata de coco a dressing for wounds,” he added.

The medical product is actually made of a higher breed of nata de coco, and uses active ingredients from the coconut, like monolaurin—which has antifungal, antiviral and antibacterial properties, that help heal the wound quickly. It undergoes a different fermentation process, making the dressing more durable. More importantly, Chicano said that it will not cling to the skin when removed, unlike gauze.

The homegrown product has undergone licensing, bioequivalence and medical trials.

CocoPatch can be used by those suffering from bedsores, burns and abrasions, and has been applied to wounded soldiers in a medical study. It has two sizes, 3.5 cm by 3.5 cm, which costs P300, and 5 cm by 18 cm, which is priced at P680. The wound dressing is typically replaced every three days.

“I wanted the product to be affordable, so that even a carpenter who earns minimum wage can afford it,” he said.

He and his wife, doctor and wound care specialist Acel Pauline Ampong, also established a wound care clinic catering to those who cannot afford hospital treatment, and a “telewound” care to reach more patients—especially bedridden ones who cannot go to the clinic.

CocoPatch is among the many displays of Filipino ingenuity being feted at GDA.

Maria Rita Matute, executive director of the Design Center of the Philippines, which hosts GDA, said that good design is no longer just about being aesthetically pleasing, but also provides solutions or services.

“Our vision is for the GDA to be the barometer of this new age in design, where it plays critical role in leading various industries in our country toward a direction [where] design is good not only when it is technically sound but also when it is good for people,” she said.

From the 161 entries, 13 awards were conferred to 11 outstanding designs. The jury gave equal weight to form, innovation, function and malasakit.

The Red Award is conferred to entries that “showcased good design with innovation and function in mind” and has garnered at least 90 points.

The Gold Award is given to entries that exemplified “the best application in each design category.”

Matute said that they hope the awards will engender a new breed of designers who have “deep curiosity and passion,” and also “cultivate a society that [bears] the Filipino value of malasakit.”