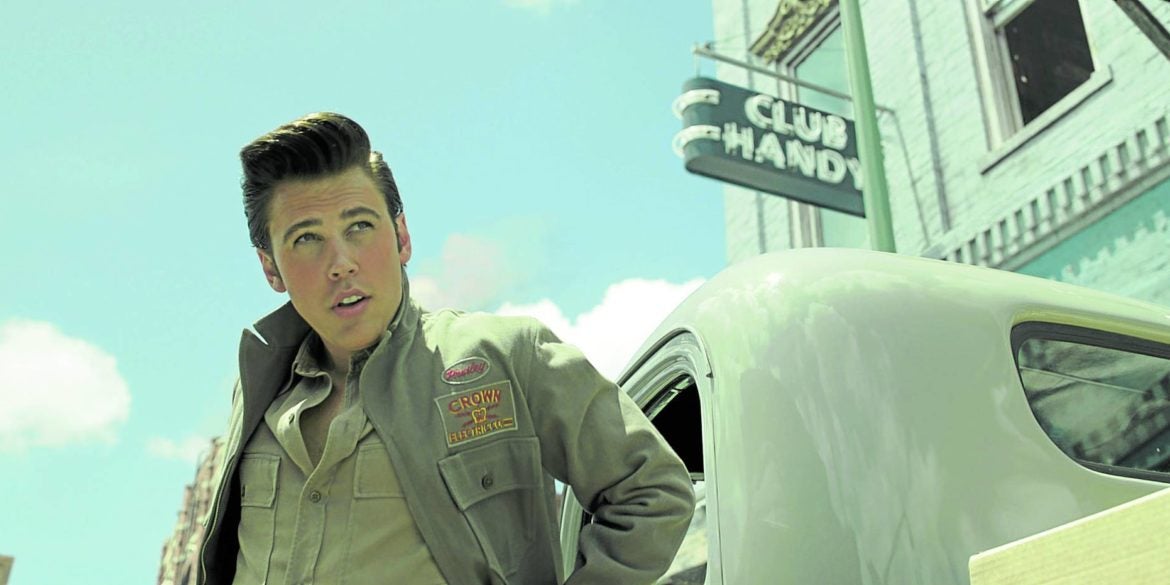 Austin Butler was born to play the musical icon.

There’s a point where the breakneck celerity of the new Baz Luhrmann movie slows down enough to afford Elvis, the fairly new rock n’ roller on the cusp of superstardom, a modicum of introspection.

A genuine look at a suffering human being beset by the pressures of wanting to take his art to more people and yet still remembering the sting of playing to regional Hayrides and being called a fairy by Midwest Bible thumping good ol’ boys.

It’s not with Priscilla (though she’s played to stunning visuals by Olivia Dejonge). It’s certainly not with his predatory manager Colonel Tom Parker (whom we meet at the start as a jowly and heavy Tom Hanks with an uncertain accent and an eye for unfettered capitalism). Of all people the most human interaction I found in this movie that cracked the Elvis persona to reveal the Aaron beneath was with his friend BB King.

“Some people wanted to put me in jail ‘cause of the way I was moving,” said Elvis, as he skipped out of a practice session to go to an apartment complex with his “colored” friends who are playing a gig, confiding in King who is here portrayed as a fiery musician shrewd to the ways of the dominant music industry milieu where white men run the radio stations and the record labels.

B.B. King (acted to the hilt by Kelvin Harrison Jr.) scoffs wryly and tells a fellow musician as kindly as he can, someone who happens to be his superstar friend: “They might put me in jail for walkin’ across the street, but you a famous white boy!”

From thereon, the young singer songwriter realizes the power he wields as an artist and that he can do more through disobedience, rather than what Colonel Parker sees him as: the best carnival act better than one that lays golden eggs.

Here’s some practical advice prior to watching the new Elvis biopic in theaters. Remember that it’s 159 minutes long. Time your bathroom break accordingly and definitely bring snacks sans heavy soda. Despite Metro Manila’s current low health protocols, Covid variants are still definitely out there. Mask up when you’re not munching on yer popcorn. But most of all, if you are familiar with the story of The King don’t expect any surprises but rather expect razzle, expect dazzle, and a surfeit of the maximalist style that’s made Luhrmann’s filmmaking a signature in his cinematic resume.

Which is a long way of saying, what an epic mess of a movie this is. How can it feel so encompassing full and yet so lacking in inner ecology? After that light bulb moment of affecting emotiveness with BB, Elvis and his touring carnival, under the baton of Parker, are speeding again into the highway of rock n’ roll foot on the gas all the way.

Don’t get me wrong. Lead star Austin Butler was born to play this role. He even sings all the live performances himself, spontaneously combusting to embody the spirit of Elvis sans caricature. A less able thespian (remember that Butler hasn’t had much Hollywood hits under his belt, except if you’re a fan of “The Shannara Chronicles”) would have made this off-kilter and off-key to land in impersonator territory.

That scene where he performs “Evil” to defy the Southern racists and bigots anxious that his Black-inspired music and hip-shaking ways will corrupt white America, is the epitome of cool. Aussie cinematographer Mandy Walker lenses that concert with sporadic freeze frames to reference black and white photography, elevating them to visual nostalgia as well as artistic gravitas.

In fact, almost all the performance sequences are dope. To me, that is this movie’s triumph. And that’s its ticket to disaster, too. Those more than two hours can become as dragging as an Elvis impersonator simply going through windmilling motions. Sure, the first half hour came out of the gates firmly on a dark horse, the tone of it already edging to ominous “Behind the Music” vibes.

Beneath the veneer of bright lights Tom Hanks as Colonel Parker collapses in his baroque office when the movie starts. Parker wakes up alone in a Vegas hospital. That near-death experience prompts him to set the record straight since the lying papers have dubbed him a cheat and slave driver who worked Elvis to the bone and stole half of his earnings (which he did IRL). 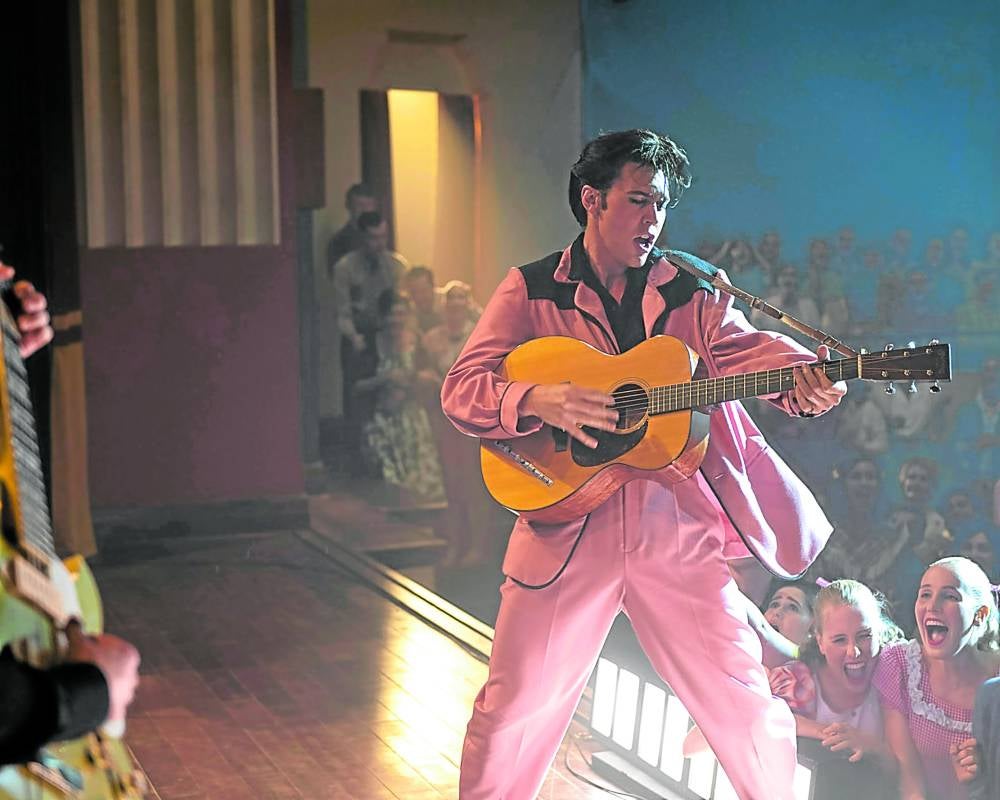 From there on we are treated to Parker’s point of view. How he, a carnival and show barker, saw Elvis performing at the Louisiana Hayride in January 1955 and witnessed how the young man’s charisma, voice, and on-stage wiggle wiggles made the ladies reluctantly scream and swoon. Sure, Sinatra already made the women react in unspeakably sensual ways, but with the new convergence of radio and television, there was now a direct, unprecedented feeling of connection. To Parker (who wasn’t a Colonel, or a Tom, or a Parker) these were simply platforms to take Elvis from truck driver to rock god. But the Parker in the movie lacks any studied characterization. Even now as I write this I still have no idea what Hanks was going for in his half-villain and half-businessman portrayal. Nothing in it stands out as memorable. And to say that about a Hanks performance in a fat suit is one of the real low points in this mess of branching emotions and arcs that go nowhere. Luhrmann never actually gives us a peek into what must have been an intriguingly rich and achingly lonely life of Elvis.

Though the high points feel like this movie is just connected setups for great music videos that happen to be the life of the The King of Rock N’ Roll, I do applaud that Luhrmann showed how Elvis drank from the original stream of rock through Black music. Props for the tip of the hat to the artists that Elvis copied so freely from and fed to the hungry, prudish Middle American public. People who’d seen nary a hip-shaking in or out of church. How Elvis later tried to replicate it as an homage of his love for country, gospel and blues is also a nifty touch.

An impressive scene is when a young Elvis Aaron first sees the writhing and holy possession at a colored Pentecostal church. How it had him entranced and awed. When he first witnesses a jazz speakeasy with Black folks dancing lewdly through a hole in the wall in a steamy performance of “That’s Alright Mama” with his Black friends, his awe turns to veneration—that next level of fandom we also see now at BTS and Twice concerts.

It’s this original strain of the local Memphis juke joints and the Pentecostal revival tents, along with the live music venues and colored clubs along Beale Street in Memphis, that made up the crux of Elvis’s influences and style down to choice of gaudy jumpsuits.

It’s a conundrum (and a wasted storytelling opportunity) that’s not really explored in the film, about how Elvis both supported and exploited Black music. For example, if you like and are familiar with “Hound Dog” then you should know that the original song was by Big Mama Thornton. A track that’s to be sung by a woman because it’s a woman’s j’accuse of a cheating lover—calling a man a “hound dog” in those times was the derogatory equivalent to calling someone a fuccboi. And Big Mama (Shonka Dukureh in the movie), was a Beale Street staple, just like her contemporaries Arthur Crudup (Gary Clark Jr.) and Little Richard (Alton Mason).

Nevertheless, the original movie soundtrack is a worthy high point of this biopic, with contributors as stellar as Eminem and Cee Lo Green and a truly interesting mash-up where Doja Cat puts “Hound Dog” through an intense remix.

The Hollywood trades were high on their reports when they finally revealed that Luhrmann’s long-delayed biopic was finally out of development limbo, but this maximalist period piece of sex, music and the dangers of unfettered capitalism personified by the American rock n’ roll hero must be enjoyed for what it is: a flashy, speedy epic that is full of incredible performance pieces but without the intuition to pump its own storytelling brakes, forgetting that you don’t got to be loud and brash all the time, son, to reveal you have soul. Here, that’s alright.