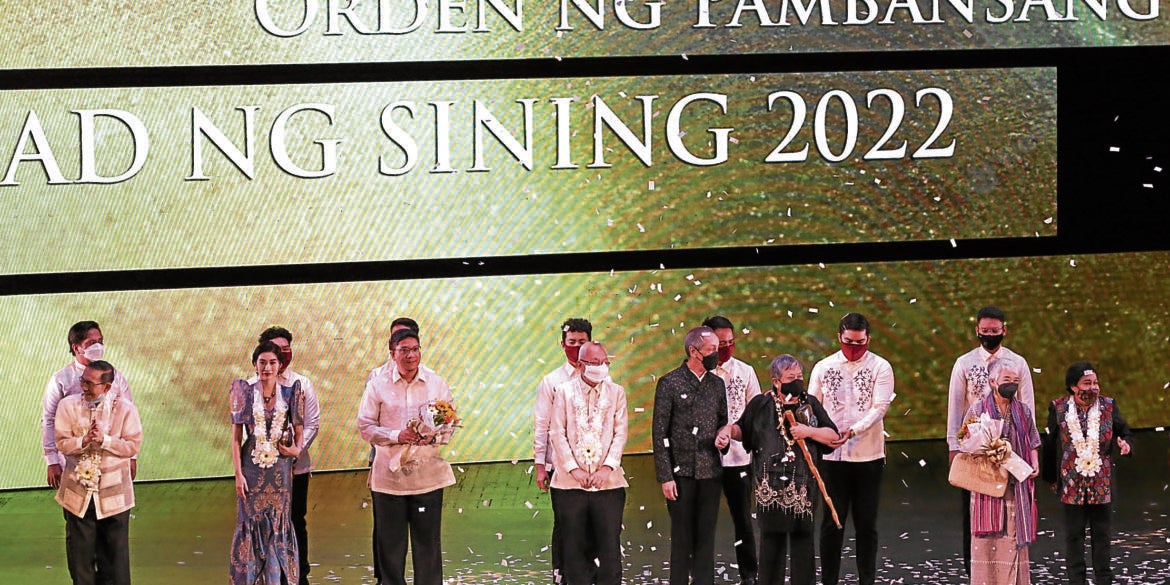 There was initial confusion over the news early June that Ricardo “Ricky” Lee had been proclaimed National Artist by Malacañang. The veteran screenplay writer and fictionist said he was sent a screen grab of a TV report in which he was ostensibly made a National Artist “for literature.”

Interviewed by entertainment journalist Mario Dumaual, Lee said that he got over his initial surprise and went along with the development since “screenplays are also literature.” Moreover, for screenplays to be considered literature was “inclusive.”

But soon, he felt uneasy. Lee said he knew he had been nominated by four institutions for the category of film and broadcast arts, not literature.

Entertainment journalist Mel T. Navarro later told him that he had checked with the National Commission for Culture and the Arts, and learned that Lee had been named National Artist for Film and Broadcast Arts.

Although the correction was made, Lee said people still congratulated him as the new National Artist for literature. Going home to Daet, Camarines Norte, recently, he saw streamers proclaiming him as such. “So I suppose, tinanggap ko na, OK na rin,” he wryly said.

Most National Artists for cinema are directors, and while most of them were auteurs who wrote their own screenplays or collaborated closely with writers so that they shared the writing credits, Lee is the first full-time film writer to be inducted to the Order of National Artists (ONA), the highest state award for practitioners of the classical arts.

Lee had in fact been nominated by the Directors Guild of the Philippines (DGPI).

“No’ng nakausap ko sila, sinabi sila na ‘yun ang isang intention nila—na ipakita na hindi direktor lang or hindi artista lang, or even producers lang, kundi mahalagang bahagi ng paggawa ng pelikula, filmmaker mismo ang scriptwriter.” (When I talked to them, they told me that it was exactly their intention—to show that not only the director, the actor, or even the producer—but also the scriptwriter, who plays a very important role, as a filmmaker.”)

He said the DGPI told him that the writer’s contribution to filmmaking was often “underappreciated.” “They wanted to make a statement,” he added.

Along with Lee, proclaimed as National Aritists for film and broadcast arts were Nora Aunor (born Nora Cabaltera Villamayor) and Marilou Diaz-Abaya (posthumous). This was a happy coincidence since the actress and director were leading figures in the development of women’s cinema in the Philippines, and some of the mokore important movies they did along this emergent cinema (then) were written by Lee.

Lee’s contributions to women’s cinema was noted by the journalism and communications department of the University of Santo Tomas (UST), which endorsed his nomination.

“Mr. Lee has written women-character studies that have basically underpinned the rise of women’s cinema in the Philippines,” stated the UST endorsement.

“These are movies that [provide] a psychosocial chronicle of the evolution of Philippine womanhood, especially at the turn of the 21st century.”

Among the movies that UST cited were ones starring Aunor or megged by Diaz-Abaya, such as “Himala,” “Andrea, Paano ba ang Maging Isang Ina?,” “Brutal” and “Moral.”

“The common denominator among this very formidable lineup of women’s films is that they have been written by Ricardo Lee,” said the UST endorsement.

Lee expressed sadness that Diaz-Abaya (1955-2012) was no longer around. He called her “one of my most frequent collaborators … and closest friends.”

As for Aunor, who was bypassed twice for the ONA honors, “Maraming taon na nasayang … but at least binigay na,” he said.

“I was close to her because we shared a common passion for good films,” he said. “Apart from doing films, she loved music. That is why I introduced her to pianist Cecile Licad. And I got her as baptismal godmother of my grandson, Emmanuel, son of my late daughter Kerima.”

Tariman also made special mention of “Milagros,” the 1997 film written by Rolando Tinio, National Artist for Theater and Literature.

“It was indeed existential,” Tariman said, “and it showed that she was one of the original indie filmmakers whose films don’t always conform to … ‘tried-and-tested’ commercial formula.”

Relating her films to music, Tariman said, “Abaya’s ‘Milagros’ is very atonal and very Phillip Glass. “Sa Pusod ng Dagat” remains a lovely tone-poem and to some extent, very Chopinesque. Her ‘Jose Rizal’ can be compared to a grand opera in the tradition of Verdi, and with “Muro-Ami,” Abaya stopped being an experimental melodist and opted for a quiet but powerful entrance to the universe of Brahms.”

“At age 90, Maestra Fides deserves it,” he said. “She sang and taught all her life, and she was also into cinema,” notably in indie film, “Niño,” where she played a retired soprano, and of course, Peque Gallaga’s monumental “Oro, Plata, Mata.”

She also did the libretto for “La Loba Negra,” the opera by National Artist for Music Francisco Feliciano.

“She happens to be the first voice scholar accepted at the Curtis Institute in Philadelphia,” said Tariman. “That’s the same school where other Filipino artists made gohod: Nena Villanueva del Rosario, the first Filipino piano prodigy; Cecile Licad, without a doubt the star pupil of Curtis and the country’s most celebrated pianist; and tenors Noel Velasco and Otoniel Gonzaga. She lived and breathed music. A true National Artist for Music.”

Dance writer Elka Requinta called Locsin the “disruptor” for “her groundbreaking and impassioned works, now known as neoethnic, (which) paved the way for nontraditional dance elements to seamlessly integrate with something as stringent as classical ballet.

“This enabled choreographers and artists who came after her to try and explore beyond this ‘Locsin-ish’ style (as what art conservator and fellow dance writer Liliane ‘Tats’ Manahan called it).

“To break the purist and Western ballet form,” Requinta explained, Locsin “fused it with another traditional element—Filipino movements inspired by ethnic cultures and tribes from Luzon, Visayas and Mindanao—and produced something new.”

“Locsin elevated both forms while successfully chronicling glimpses of Filipino life and beliefs in a way that her audience can relate to,” Requinta added.

“Who can forget the forest vine-inspired gyrations in ‘Encantada’? Or the transposed wrist-rotations in ‘La Revolucion Filipina’ to convey that one of the country’s historical figures, Apolinario Mabini, was a writer?”

“Meticulously contorting dancers’ bodies every which way, allowing them to flex and stretch where they’re not meant to, turned out to be a natural fit with local dancers’ physique,” explained Requinta.

“Expressions and storytelling seemed more authentic with earthy and grounding movements, combined with Locsin-trained artists’ acquired ability to convey messages effectively. Even something supposedly simple as the mating ritual of spiders, managed to transcend (beyond just being) a controversial and risqué piece.”

Like the first National Artist for fashion design, Ramon Valera, Lim-Higgins (1920-1990), or Slim, modernized Philippine fashion. Some of her creations are part of the collection of the Smithsonian Institute. Her designs, according to fashion writer Marge Enriquez, were characterized by “architectural bravura.”

Mabesa (1935-2019) made his mark in campus theater, establishing Dulaang UP and the UP Playwrights Theater, whose acclaimed productions he directed and mounted. Admirers like journalist and former stage actress Alya Honasan called him “the Lion of the Theater,” who trained several generations of theater-trained actors and professionals who in turn brought their discipline to film and television.

Abad is an acclaimed poet in English and the foremost archivist and scholar of Philippine poetry in English. Through his classes in the University of the Philippines (UP) Diliman and creative writing workshops in other universities, he has influenced aspiring writers and helped produce the next generation of poets and writers.

“I was happy for Sir Jimmy and happy for all poets that were able to sit with him through class and workshops and smoke with him, Winston Reds in hand,” poetess, performing artist and UST professor Nerissa Guevarra said. “Without this man, we would not have loved poetry in English and performance poetry.”

“Why did he deserve the award?” Guevarra wondered aloud. “The 18-year-old in me would say because he was Sir Jimmy, that would be that. I learned how poetry resonates like a well-used musical instrument from his physical renditions of his favorite examples, physical in a sense that he would fill his small room at the UP Faculty Center with his graceful gestures and full voice. This 49-year-old professor would say he persevered and still does in his archiving of Philippine poetry, and we are all the better for it.” —Contributed INQ