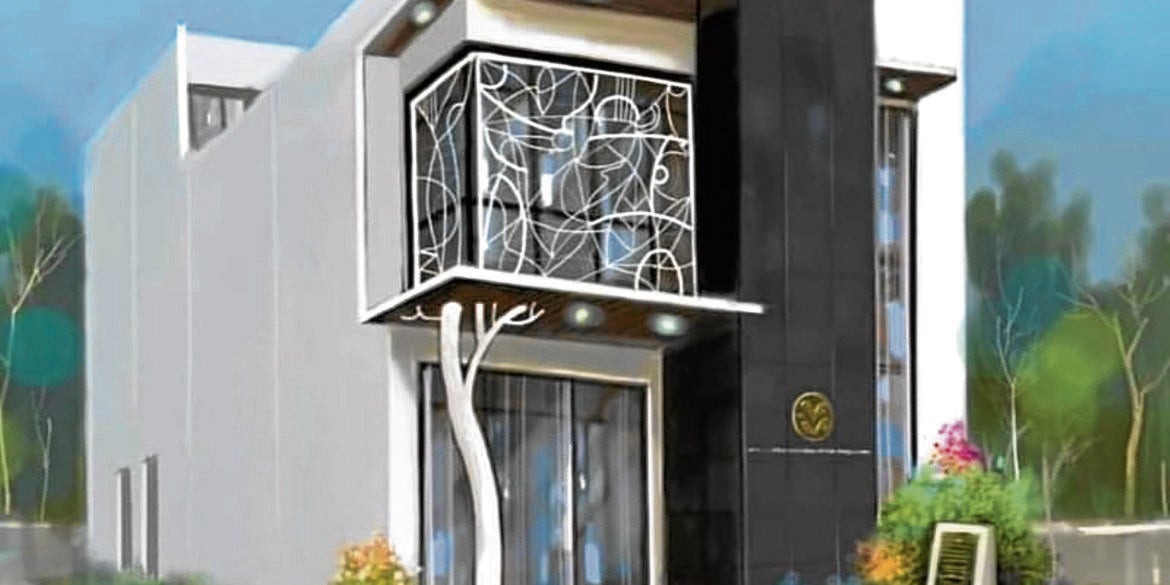 AAP Home, designed by AAP president Fidel Sarmiento. The tree growing into a window box will be sculpted by Sam Penaso. Engineer contractor is John Morales, who is working pro bono.—CONTRIBUTED PHOTO

A forever home for artists

A visual manifesto is rising on a 200-square-meter lot in Metro Tagaytay, a tiny two-story structure with big dreams, a testament to artists for artists who will finally have their forever home, a yearning that incubated 74 years ago since the inception of Art Association of the Philippines (AAP).

Big dreams or millions of pesos have been attained by several so-called “Kanlungan Boys” who honed their chops through Kanlungan ng Sining, or Art Haven, in Rizal Park, which gave them a venue rent-free from the National Parks Development Committee (NPDC) from 2002 to 2014 in exchange for 12 paintings yearly.

Fidel Sarmiento, who was AAP president from 2002 to 2008, then from 2010 until the present, proudly rattled off artists, such as the celebrated Randalf Dilla, Robert Fernandez, Mark Louie Gonzales, Emmanuel Balboa, Averil Paras, Joseph Villamar and more whose careers gestated at Kanlungan.

Famed Villamar of Saturday Group declared in Filipino, “AAP was the path that led me to art. I owe AAP a lot, for it gave me the impetus to share my talent. AAP played a big part in how far I’ve gone in art.”

The park house project screeched to a halt in 2014 when the NPDC, under a new chief, refused to renew their contract because of office conversion. “And as fate would have it, a few months after their park home was padlocked, a huge tree fell on the roof and blocked its entrance,” related Sarmiento.

With the padlock etched in his mind, Sarmiento vowed to build a permanent AAP house “to avoid being at the mercy of any government official.” Inspired by the two successful fundraisers garnering some P10 million called “Artabang 1” for Tropical Storm “Ondoy” (international name: Ketsana) victims and “Artabang 2” for Ormoc victims, Sarmiento once again asked his good friend, Michael Diño, presidential assistant for the Visayas during the Duterte administration, to host a third edition of “Artabang” benefiting AAP Home.

AAP scretary Margaret Lim, a Hall of Fame watercolorist, said, “We asked 80-plus artists to donate their paintings for a one-night auction on Dec. 19, 2019, raising P4.5 million.”

Together with other AAP officers—Roger Santos, Monette Alvarez, Angelito Florendo and Veronica Olan—Sarmiento and Lim “scoured Metro Manila since COVID 2020, even up to Tanay where a misstep deeply scarred my right knee. We ended up with this P1.8-million 200-sq-m lot in Barangay Ulat, Silang, Metro Tagaytay,” Lim said. “There are quite a few galleries in Tagaytay, so we decided it was the right location with our small budget.”

She added: “Groundbreaking was done March this year. We have already spent P1 million for the steel bars. The weekly payroll and materials are fast draining our budget. We really need more help. An artist committed to donate 10 cement bags, another 20 bags. Still another got a congressman to donate a refrigerator.”

There are 8,000 registered AAP members with 2,000 active ones. Sarmiento, who took up architecture at Mapua University in 1978, designed the two-story structure with roof deck. The contractor/engineer, also working pro bono, is his high school classmate, John Morales. Construction on the second story of AAP Home/office/gallery is underway.

“Kanlungan became a school field trip destination, an on-the-job training site for nearby schools. We will continue to have painting workshops for artists of all levels,” said Sarmiento, who shares his knowledge of various painting techniques.

One recipient is Jane Ebarle, Faber-Castell Philippines manager. To this day, Ebarle thanks AAP for her success in the art world and the marketing field. In return, she generously supports AAP endeavors, donating materials to Sarmiento’s seminars in prisons, homes for the aged, and schools in the provinces and Metro Manila.

Eman Mediana Santos, a versatile multimedia artist whose works hang in homes from Manila and London to Austria, Germany, Luxembourg, Italy and Singapore, said in Filipino: “AAP is a big part of my life. It is how I gained my art experience and knowledge and obtained so much opportunities. AAP helped, taught and nurtured artists.”

Another multiawarded hyperrealist, Robert Fernandez, said in Filipino: “When I started with AAP as a volunteer, I had no idea how to paint. I met noted artists and, guided by AAP officials, I ventured into the art scene. Now I want to share what I’ve learned with the young and the adults who want to paint without expecting something in return.”

The current members are painstakingly painting stroke by stroke, color by color, the biggest canvas, their legacy, AAP Home. —CONTRIBUTED