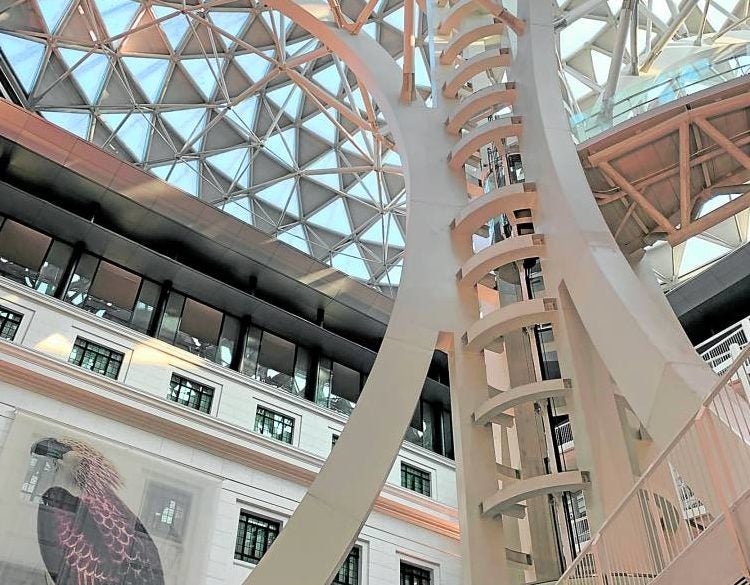 The DNA Tree of Life is the centerpiece of the National Museum of Natural History. —PHOTOS BY NIKKA G. VALENZUELA

Conservation of PH flora and fauna: Teaching through art

Under the steel canopy of the National Museum of Natural History’s DNA Tree of Life, native and endemic flowers and animals of different kinds can be seen.

There’s the majestic tamaraw, a curious bear cat, or binturong, a graceful sea turtle, a fierce Visayan warty pig, two varieties of rafflesia, a tropical pitcher plant and the aromatic ylang-ylang, all of their different personalities and energies captured in acrylic, watercolor, or oil.

Forty-four artworks of varying Philippine flora and fauna are on display at the National Museum until September this year. The paintings are made by members of Philippine Botanical Art Society and Philippine Fauna Art Society (PhilFAS), whose works are manifestations of their advocacy to raise awareness and conserve the native species in the country.

Character of the species

“If you ask me what is good enough to show at the National Museum, I will tell you three things—expertise, someone who knows what they are portraying; second is freshness and energy, someone who has something to say when they illustrate or paint or draw; and the third is sincerity to truly portray the character of the species,” said museum director Jeremy Barns during the opening.

Sincerity and passion were really the common denominator of the members who have showcased their works at the exhibit. Self-taught artist Nestor Abayon Jr., for example, started painting tamaraws, or dwarf buffalos, in 2020, after the death of Kalibasib. The animal was the only tamaraw successfully bred in captivity, and was the local government’s attempt to repopulate the critically endangered animal.

“Poaching of tamaraws is unfortunately a rampant practice in our province of Occidental Mindoro. I do not have power or influence like other people, but I use my talent in painting to show people that tamaraws are in danger,” Abayon said.

His oil painting titled “Simbolo ng Pag-asa” is an up-close view of the tamaraw, the largest land mammal endemic in the country.

“Si Pawikan,” meanwhile, is a combination of love for the beach, for sea turtles and painting for economist Laura Britt-Fermo.

Britt-Fermo used watercolor—her preferred medium—in painting “Si Pawikan.” She wanted to mimic the movements of water by adding splashes of blue and yellow colors around the creature. But because this is a fauna painting, she maintained hard edges to make the pawikan as accurate as possible.

“I’ve always had a fascination and love for the sea turtle. Initially it was because we love the beach, so every time we go to different beaches in the country, we always make sure to join a sea turtle sighting. They always look so magnificent,” she added.

It was a trip to Southeast Asian Fisheries Development Center in Iloilo, where she saw rehabilitation of sea turtles that were injured by human activity, that deepened her affection for the shelled animals.

“The other turtles that they save and later on release were injured because of plastic straws or fishing nets. But there was an injured sea turtle they have kept because with the extent of the injury, it could no longer be reintroduced to the sea. You will really feel for the creature, and you will be amazed because half of its face was cut off, and yet it was still alive,” said Britt-Fermo, who became a little emotional talking about the sea turtle.

“Every time I talk about this naiiyak ako. It’s like there’s this feeling of guilt that you carry for this creature who suffered so much injury,” she said.

The two organizations that spearheaded the exhibit were also founded on an intense fervor to champion the cause of flora and fauna.

PhilFAS founder Bing Famoso recalled that the two groups were born years after she developed an interest in native plants. There were no groups dedicated to botanical art style then, so Famoso started one.

“I thought that the flowers I was familiar with like bougainvillea, kalachuchi and gumamela were native. However, I found out that they were exotic, [some were] even invasive. It is hard to imagine that our very own national flower—the sampaguita—is not even from our country,” Famoso said.

A deep dive into the native species led Famoso to articles that the Philippines is not just rich in natural heritage, it is one of the 17 megadiverse countries identified by international conservation groups.

“To qualify [in this category], the country should have at least 5,000 endemic plants and marine ecosystems. The Philippines has more than 10,000 native flora—5,000 of which are endemic,” she added.

Famoso also noted how varying species are also in danger due to human activity like poaching, illegal logging and conversion of forests to commercial areas, and how this disruption will affect the ecological balance.

The fauna art society was created later to represent another facet of biodiversity. As of May, the flora and fauna societies have 121 and 111 members, respectively, and they have mounted 10 exhibits that showed 600 works.

“Our organizations hope that through the visual arts, we could educate our fellow Filipinos about our native flora and fauna, be one with other environmental groups raising the critical status of our native species and their conservation status as most are now considered endangered,” she said.

The art societies also aim to revive the botanical style of painting, and to encourage more Filipino artists to paint native species.

“I’m a bird person. I love animals. I love plants, especially in the beginning of the pandemic when everyone became a plantito and plantita. But my way of being a plantita was to be more aware of our endemic species,” she said.

“From then on my goal is to promote awareness of these species that we have through visual arts. Because when you look at art and you like it, it leaves an indelible mark in your mind that we have this, the Philippines has this,” she said.