An evening of song and dance, champagne and people-watching | Inquirer Lifestyle ❮ ❯ 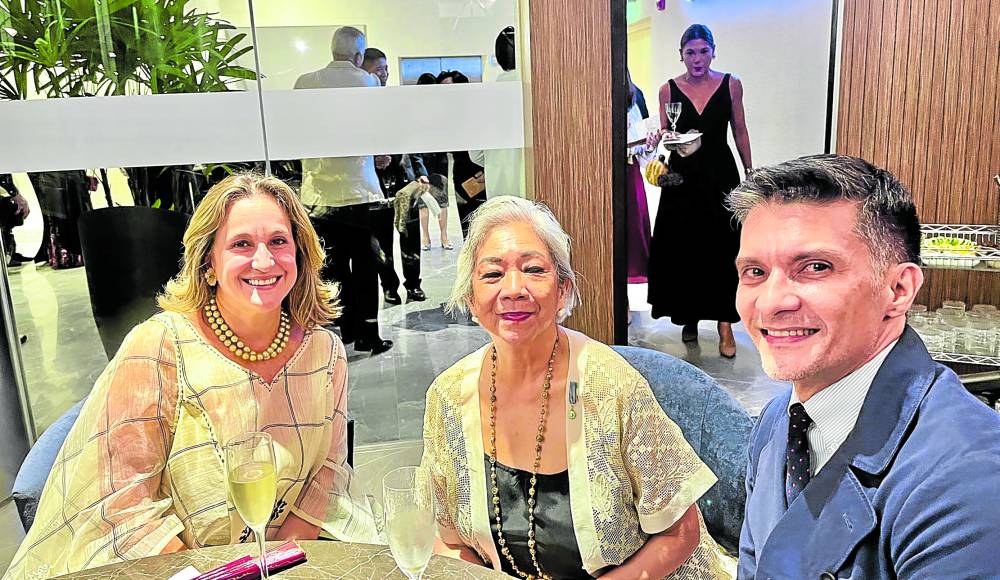 An evening of song and dance, champagne and people-watching

“Welcome Home” was the apt title of the concert unveiling the much-vaunted state-of-the-art Circuit Performing Arts Center (CPAT) aka Samsung Theater, named after one of the biggest donors. Prominent members of the Philippine theater industry and patrons were brought back together either onstage or during the cocktails served by chef Gilbert Pangilinan.

Spearheading the undertaking were the Zobels and the Ayala Corp., who considered the needs of the audience, the performers and the producers.

In his opening remarks, Fernando Zobel de Ayala, Ayala Corp.’s CEO and president, acknowledged his sister, Sofia Zobel Elizalde, as the chief cheerleader of the project. A former dancer and head honcho of the Steps PH dance studio, Elizalde was consulted regarding the stage requirements of dancers. Steps had the fortune of road-testing the stage and rehearsal hall, both constructed with joint-friendly sprung floors.

He added, “The dressing rooms are nothing to sneeze at. Beautifully appointed and spacious! I love how they have so many flies (rigging system) to help with the scene changes. Plus, there seems to be no bad seat in the house from a visual standpoint.”

Theatergoers will be delighted by several restrooms with bidets that they don’t have to wait in long queues.

The show’s writer-director, Floy Quintos, was tasked to present the new theater and its possibilities. Yet it was engaging—mixing information with familiar, heart-tugging songs and dance. He said he had fun creating the first two production numbers, which evoked the excitement of returning onstage.

Wearing a black robe, Menchu Lauchengco-Yulo entered like a queen into the darkened space with only ghost lining and sang “As If We Never Said Goodbye,” from “Sunset Boulevard.”

“The highlight for me was stepping on a stage again after almost three years and performing to a live audience. I felt emotional doing the opening number,” she recalled.

Lauchengco-Yulo gushed about the performing space that, despite its 1,500-seat capacity, felt like a cocoon. “It’s so large yet so intimate. You feel so connected to the audience.”

Bituin Escalante’s rendition of “We’ve Got Magic To Do” from “Pippin” with Steps Dance Studio doing a jazz number reminded the audience of the make-believe world of live theater.

Quintos rewrote the lyrics of “If My Friends Could See Now” from “Sweet Charity,” which talked about the thrill of restarting live shows. It was sung by Jamie Wilson followed by Reb Atadero who took the audience on a virtual tour of CPAT.

Highlighting CPAT as home for Filipino talents, the second part went nationalistic with kundiman and OPM with Manila Symphony Orchestra under the baton of maestro Marlon Chen. “Minsan Ang Minahal Ay Ako” by Valderrama and Lauchengco-Yulo was the most applauded number.

Aside from working with the industry’s crème de la crème, Quintos appreciated the efforts of CPAT managing director Christopher Mohnani, “a theater manager who is, at heart, a theater person and a performer.” Mohnani was principal dancer in dance companies here and abroad and has extensive experience overseas in arts administration.

Quintos is eyeing the rehearsal hall which could double as a black box theater, a jargon for a flexible, open space. “Hope to do a straight play soon.”

For the audience, too, it felt like a reunion seeing their friends dressed up in suits, long dresses and modern Filipiniana. The Serafin Cua VIP Lounge was the place to people-watch and to get champagne.

Seen in the orchestra were retail scion Anton Huang and wife, Nina. National Artist for Dance Alice Reyes was given the spotlight before the opening number.

Everybody was excited to meet up after a long time while keeping their masks on.

“Nothing is as memorable as trying to restore closeness and spontaneity while trying to stand by safety protocols,” said Quintos. —CONTRIBUTED