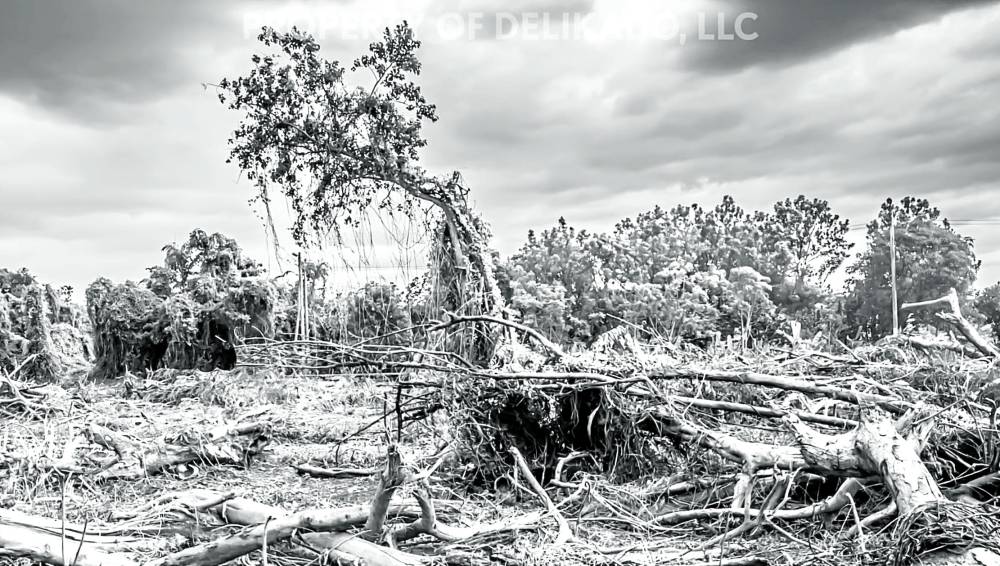 A screen grab from the film showing a denuded forest in Palawan, from a 1970s photograph —PHOTOS COURTESY OF “DELIKADO”

The ugly truth about paradise

Rage. Lawyer Bobby Chan, executive director of the Palawan NGO Network Inc. (PNNI), talks about a certain rage that builds up in the hearts of environmental defenders standing up to the “impunity” of illegal loggers and fisherfolk in the Philippines’ “Last Frontier,” the province of Palawan. “People see Palawan as a nice tourist destination,” Chan says. “But inside, it’s eating itself up.”

Chan is a leading character in the hour-and-a-half-long documentary “Delikado,” roughly translated as “dangerous” or “fragile”—excellent words to describe both the lot of such environmental defenders, and the national patrimony they have vowed to protect, because the Philippines’ leaders are not doing it.

“Delikado,” directed by Karl Malakunas, produced by Michael Collins, Kara Magsanoc-Alikpala, Malakunas and Marty Syjuco, written by Collins, Malakunas and Laura Nix, and with haunting original music by Nainita Desai, has been a number of years in the making, and has already been screened in film festivals worldwide.

“From the front lines of a man-made ecological disaster, this thrilleresque documentary cuts like a chainsaw at the heart of the Philippines’ fight for its environmental life,” reads a statement for the Melbourne International Film Festival, where it will be screened this Aug. 9 and 11.

“Thrilleresque” it is, right from the suspenseful opening, when the para-enforcers, armed only with machetes, and after a moving prayer offered after a shared meal, come upon illegal loggers, the jarring sound of a chainsaw overpowering the music of birds and wildlife. The para-enforcers confiscate the chainsaw and bring it home to Chan at PNNI’s office in Puerto Princesa, where it is added to a tower of such tools of environmental rape and destruction that stands in the yard of the headquarters.

“In 2011, as a journalist for Agence France-Presse based in Manila, I was preparing for a trip to Palawan to write an article on ecotourism,” recounts director Malakunas in his statement. “ … But my contact for the story, an environmental campaigner, was shot and killed just before I was due to go. I went anyway, to investigate his murder. When I was there, I discovered this seemingly idyllic island was being destroyed by the people in power who were meant to be protecting it. I also discovered a small group of people putting their lives on the line trying to stop the destruction.”

The small group included Chan, his para-enforcers like Balladares and “Kap” Ruben Arzaga, and then El Nido Mayor Nieves Rosento, whom the film crew managed to tail when she ran for election last May 2019.

I watched this film more as a concerned citizen than a movie reviewer. The aesthetics and effective visual presentation are all there, to be sure. There’s the editing, with powerful scenes juxtaposed against vignettes of Filipino life, like a close-up of pigs eating (which does allude to the villains, I inevitably think, although that would be unfair to the pigs), and the opening scene of Rosento, whom Chan calls an “ally,” bathing her grandchild, which firmly establishes that the woman is no traditional politician.

There’s the spot-on music and sound, like the ubiquitous strains of karaoke singing, which Chan and his team enjoy during a drinking session. There’s touching footage of a para-enforcer staring in awe at a huge, ancient tree, and the respect he has for his “ward” is palpable.

The fact is, there is little in this film that environmentally concerned Filipinos do not already know, or at least have no inkling of. We know that Palawan is breathtaking, but we also know that not all is well in paradise; I have seen enough decimated forests and dead coral reefs to think so. We know that defenders of the sea and forests in Palawan are an especially dedicated bunch, knowing that there is so much still to protect, although whatever is left is in a precarious state.

Most of all, it is common knowledge—yes, it is—who the perpetrators are. Names have been bandied about for decades, and we have seen what the reported greed, impunity, and sense of entitlement have resulted in.

The clincher is that “Delikado” pulls no punches and mentions the bad guys by name. Chan states clearly that one public official must be stopped. Remedios Cabral, a Tagbanua elder, stunning in her dignity and defiance, refers, almost with a sneer, to a “Father of the Province” who has allegedly bought out the entire area; go-betweens warned her, she reveals, that this “Father” might have her killed if she doesn’t sell, but she stands firm, aware of the degradation that will befall ancestral land if she caves. There is a lump in my throat when she declares, “The earth is like our parent.”

The threat is real (spoiler alert). Early in the film, “Kap” Arzaga states, “If this illegal activity isn’t stopped, before my youngest daughter becomes an adult and has her own family, all the big trees will be gone.” Before “Delikado” is even halfway done, Arzaga is dead, shot during an informal reconnaissance visit to an El Nido forest, where loggers were reported to be cutting away.

It’s a plot twist that literally made me gasp. The crew covers his funeral, and seeing his daughter wail, “Papa, uwi na tayo” (Papa, let’s go home), is almost unbearable. Rosento is there, crying as she embraces Arzaga’s widow; Chan cries quietly on his own, remembering Arzaga not just as a team member, but as a friend. Those tears simply could not have been staged for the camera—and you get a taste of the rage that Chan is talking about.

The rest of the film had me holding my breath, wondering who was going to be killed next. In 2019, the environmental watchdog and human rights group Global Witness had found after a three-year study that the Philippines was one of the most dangerous places in the world to be an environmental activist.

“If we cannot protect the people defending the planet,” asks Global Witness senior campaigner Ben Leather during a forum attended by Chan, “how are we going to protect the planet?”

There’s audio of a radio program where a politico-logger’s henchman threatens “yang p—–inang Chan” (that son of a b–ch Chan) on air for all to hear, and the program host doesn’t stop him. Rosento is included on the list of local officials declared by the government to be dealing in drugs, and she lost her reelection bid in 2019.

“Grabe sila” (They’re unbelievable), is all she can murmur in disappointment. When her successor as El Nido mayor, a government candidate, is asked by the interviewer about allegations that votes were bought, she answers, “All politicians give money to people”—then, probably realizing she had put her foot in her mouth, follows up with, “That’s a personal question, ha.” Finally, Chan is declared persona non grata in Puerto Princesa, and the chainsaw tower is confiscated by the local government. You don’t need rocket science to make the connections here.

The biggest injustice, indeed, as Balladares says, is that citizens are doing the job of the country’s leaders. At this point, if you still think that losing a few trees has nothing to do with you, at a time when issues like COVID-19 and rising prices seem like the real problems, please think about the bigger picture—our natural resources, our country, our planet. People like Chan and Rosento may have options, but the likes of Balladares, Arzaga’s family, and other average folk have nobody to rely on, and stand to lose everything if nature is destroyed. Meanwhile, our “Fathers” preoccupy themselves with turf wars, tarpaulins with their faces on them, and pursuing laws on truly life-changing issues—like ghosting, for instance.

Chills run up your spine when Balladares recalls his days in the military, when, while his team was guarding a forested island, a barge loaded with 22 chainsaws from Malaysia arrived—and the guards were ordered to use them. He remembers, by himself, cutting down as many as 60 old kamagong trees a day. “Follow the leader lang kami (We just followed the leader).”

HopeSo for citizens in the know, “Delikado” confirms—powerfully, artistically—what we already knew, but try not to think about because it depresses us too much. Is there hope?

Rosento, who managed to win a seat on the provincial board in the recent May elections, declares that she wants to become Palawan governor one day. Balladares is a farmer when he’s not apprehending illegal fishermen and loggers—the way he respectfully, gently talks to the offenders, telling them he understands the need to feed their families, is remarkably compassionate—and simply wants his grandchildren to someday say, “This is what our grandfather did.”

You wonder if only foreigners could have indeed spearheaded this film, immune as they are to harassment by the aforementioned “Fathers” and other such characters. “I filmed ‘Delikado’ with the intention of it being an intimate thriller about the lives of the land defenders, to ensure that audiences feel an emotional connection with the characters while learning about extremely compelling social and environmental issues,” Malakunas says in his statement.

Malakunas has succeeded, and every Filipino who gives a rat’s ass about his or her country should see this film, if only to realize that environmentalism is not just about hugging trees, and then going back to an air-conditioned, five-star resort room in Palawan that could very well have been built on what used to be a forest.

Many Filipinos have long had suspicions about the trouble in paradise. Now, because of “Delikado,” they know for sure.

“Delikado” will be screened on Aug. 13 at 3:30 p.m. at the Cultural Center of the Philippines. For tickets, check out the CCP box office or https://premier.ticketworld.com.ph.