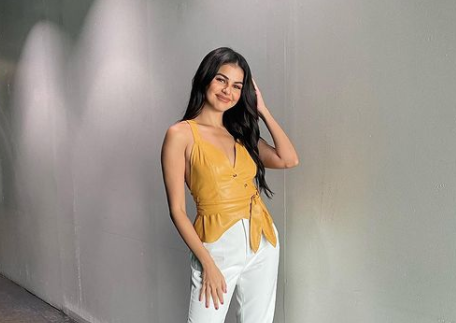 Actress Janine Gutierrez unabashedly admitted that there was a time during the lock-in shooting for “Sleep With Me” when she “courted” co-star Lovi Poe.

“Actually, may time talaga na feeling ko nililigawan ko si Lovi (there was a time when I felt like I was courting Lovi) because I really like to get closer to her. For my own selfish reason that I love you (Lovi) and I want you to know that I am here for you,” Gutierrez said during the face-to-face media conference for the original iWantTFC series set to premiere on Aug. 15.

She revealed that when Poe celebrated her birthday while they were in lock-in taping, she did not hesitate to give her a gift, something which Poe cherishes.

In the series, Gutierrez plays Harry, a DJ who fell in love with Poe’s Luna character who is afflicted with delayed sleep phase syndrome (DSPS). Gutierrez felt she could very well fell for Poe.

“After seeing the relationship of Harry and Luna and what they’ve been through, if I met Luna in real life… I mean who’s to say, ‘di ba, if you’re given the chance to a happy ending, why not? Crush ng bayan naman talaga si Lovi (Lovi has been everyone’s crush) ever since,” she said.

Playing a lesbian character in the film is also a welcome thing for Gutierrez, as well as her friends and relatives, particularly a cousin of hers who is lesbian herself.