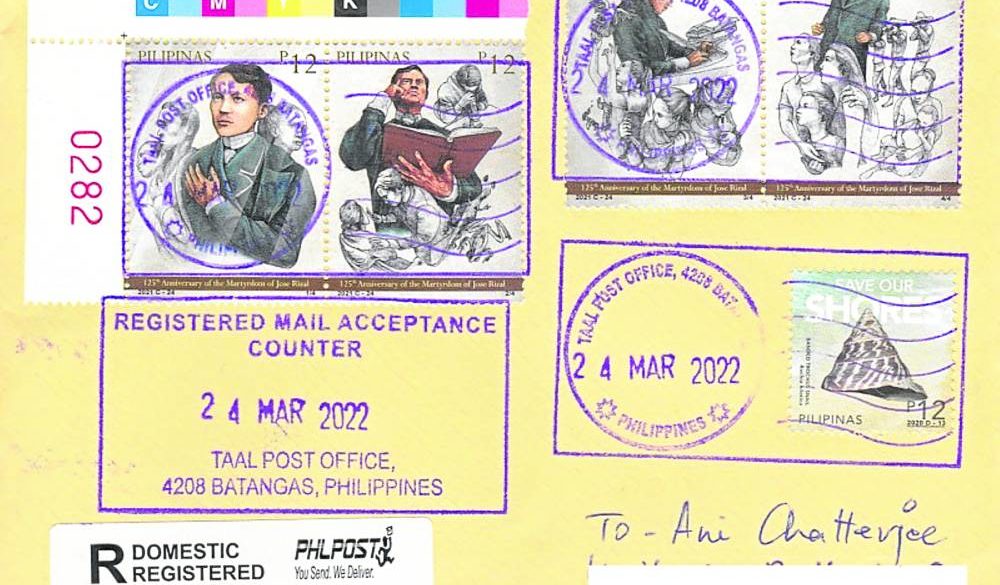 Some pieces from his collection

Have you ever received a letter? Or had a pen pal from overseas? If you look at the envelopes you get in the mail, you can observe various details. You can instantly spot the stamp, the recipient’s and sender’s addresses, and even special stickers or designs if the sender puts in the extra effort. But something people seldom notice is the postmark, an indicator of where and when it was sent or received at a certain post office. While most of you might not be interested in postmarks, some people are filled with amazement at the sight of them. They see it as more than just ink.

This National History Month, let me introduce you all to a collector who has found his joys in collecting postmarks.

Aniruddha Chatterjee is a collector of stamps, postcards and postmarks. He first started collecting when he moved to the Philippines for work in 2013. His desire to know more about the Philippines and its culture and history led him to embark on a unique way of doing so, through collecting postmarks. “It is here that I was able to further enrich my love for philately and my collection. I made regular trips to the Central Post Office in Manila. The people there were very kind and helpful,” Chatterjee said.

But what’s a postmark? When you mail a letter, Chatterjee said, “The post office applies a cancellation (called a ‘postmark’) on the stamps to make them invalid for further use for postage. Postmarks usually show the date and place of mailing and in some cases, the time of sending.” Things get more exciting when you can use the postmarks to track your letter’s journey. Chatterjee shared, “Sometimes, you may be lucky to find several postmarks on your cover—or envelope—from their transit or the places along its journey to its destination.”

Postmarks show you a letter or parcel’s postal history.

Chatterjee said that some covers are valued by collectors if they have special postmarks, are stamped from a special place or on a special date, or are missent to other destinations. All these things make a cover more collectible. “My love for collecting covers enabled me to build a strong network of collector contacts from all over the world, some of whom became very dear and close friends and most of whom I still haven’t even met personally even after so many years of correspondence!”

There’s a term used for postmark collecting: marcophily. “Marcophily, occasionally called marcophilately, is the specialized study and collection of postmarks, cancellations and postal markings applied by hand or machine on mail that passes through a postal system and applied by the postal operator through whose domain they pass. Commatology was a term used prior to World War II but is rarely used today,” Chatterjee said.

Other interesting covers to collect are those from faraway places, “dead” countries (or places that no longer exist), and special dates on postal cancels like the palindrome date 22 February 2022 or 22.02.2022, or even someone’s birthday. “What’s more interesting is finding one on your birth year!”

Chatterjee has also collected postmarks that are sent on special occasions with matching stamps—one of them is a postmark dated Feb. 14, 1998 and is paired with an “I Love You” stamp. 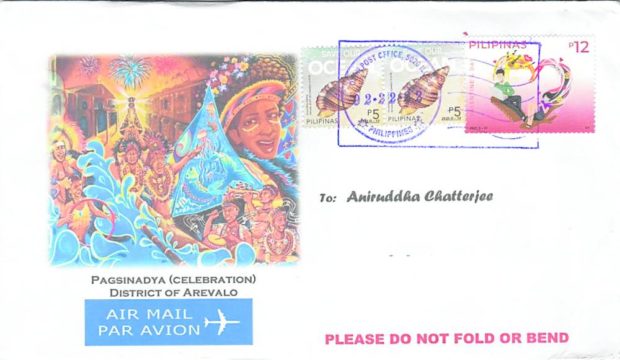 Towns across the Philippines

“Collecting postmarks of the Philippines was a great avenue through which I could learn more about its history and general geography,” he said. “It did not take long for me to get hooked on Philippine postal cancellations. I quickly set my focus on collecting postmarks of towns across the Philippines. As my collection grew, so did my excitement, thrills and fascination, not to mention all the beautiful people and friends I made through my almost daily correspondences.”

Whenever he’d travel to any town in the Philippines Chatterjee prepares his covers and postcards and tries to visit as many post offices as he can to have his mail postmarked and cancelled. “In so many instances, finding the post offices was already an adventure by itself. I’ve gotten lost numerous times and as always, made brief interactions with strangers who guided me to my destinations which always proves Filipino hospitality is everywhere.”

Apart from collecting postmarks and stamps, he also likes to record local fauna and flora species and learn more about them. He has collected 200 postmarks from different towns and cities in the country, the furthest being from Maitum, Sarangani.

Like with many hobbies, postmark collecting led Chatterjee to join groups which have helped his collection grow tremendously. “I joined the PostCrossing Philippines group (PCPH) and the Philippine Stamp Collectors’ Society (PSCS) on Facebook and was amazed at the wealth of knowledge available to me and the kindness and benevolence of my fellow collectors. Everybody there was always willing to share his or her knowledge and experience.”

PSCS continues to grow at a fast rate. “It is here that I was able to get the guidance and assistance from many members who helped me build my collection of Philippines postmarks. The members are very gracious and helpful. I have made many good friends there too.”

PCPH focuses more on postcard collectors and swappers in the Philippines. In the group, Chatterjee has received help in building his collection from numerous postcrossers who are located across the Philippines. The group also has various local artists and postcard makers who can surely help others start their own collection.

His advice for those who want to start collecting? “First decide what kind of postmarks you would like to collect. There are various kinds of postmarks around the world. Once you decide, you should then start building your contacts through social media and join online collecting clubs to start building your collection. As always, knowledge is power.”

Chatterjee finds a lot of joy in his hobby. “Postmarks help you know about places and events. You simply don’t collect but immerse yourself in researching the postmark. Since postmarks are generally stamped by hand, it creates a human connection to the hobby. I have visited many small post offices and met their post masters. They are surprised to know that what they postmark is collected by someone.” —Contributed