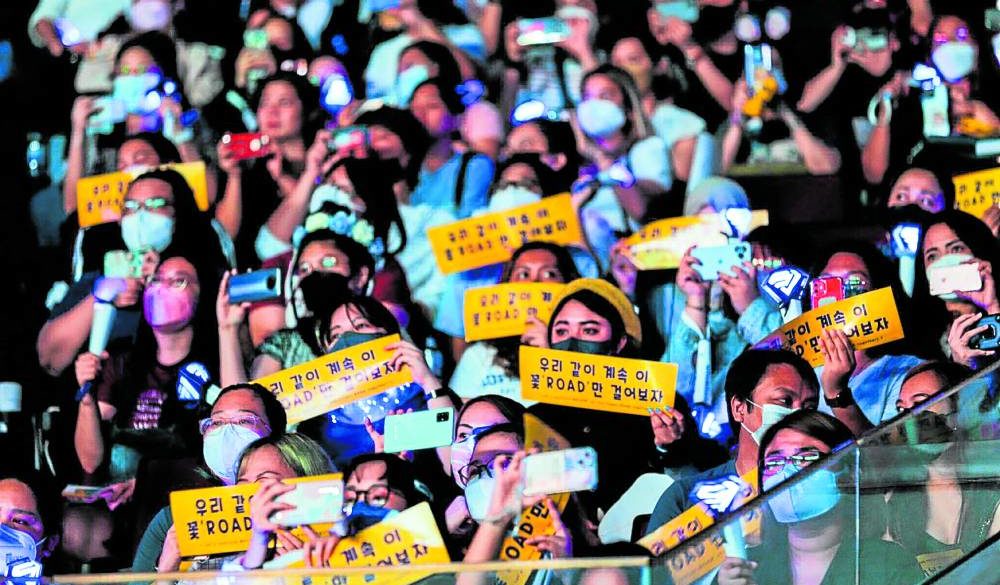 ELFs (Super Junior fandom) show up at MOA Arena despite the concert being postponed. —@happeehour Twitter

‘Pasabuy’ ticket: A dark side of K-pop fandom

To say that the K-pop community is built on trust is an understatement. People meet and become friends while lining up outside the concert or fan-meet venues. Interactions on social media can lead to real-life meetups and friendships.

The community can be extremely generous with one another. Fans can accommodate and host friends who fly into their countries. There are stories of fans buying multiple albums and leaving them in cafés for other fans who couldn’t afford them.

This relationship among fans has also led to thriving online businesses. Group orders and ticket buying services or “pasabuy” have become common.

“We don’t normally ask for an ID because it can be used for identity theft. I’m a seller and I don’t give them away immediately,” said Charlene Pagara, owner of the online K-pop store @AnijkShop on Facebook.

Background checks are done online in place of IDs. Sellers check for successful past transactions. Alternately, they check one’s years of being active in the fandom.

Referrals are also common. Pagara introduced Anna (not her real name) to Zhamie Bindoy. Anna is Pagara’s regular client and Pagara has known Bindoy for years on social media. Bindoy offered a pasabuy service for Super Junior’s concert “Super Show 9: Road in Manila” in early August. Anna paid P12,900 for a P12,750 ticket. The extra amount was for Bindoy’s trouble of lining up for her.

“I was in the hospital and couldn’t go buy my own tickets,” Anna said. There was also nothing suspicious in the beginning. Bindoy successfully purchased a “Super Seated” ticket (the highest ticket tier for the event). Bindoy forwarded a picture of it to Anna.

But come concert day, Anna couldn’t get hold of Bindoy for her ticket. Instead, she was sent on a wild goose chase.

The show was eventually postponed after the unexpected passing of band member Eunhyuk’s father. However, Super Junior members who were already in Manila went ahead to meet and greet their fans at the venue. Shindong, Ryeowook, Donghae, Yesung, Kyuhyun and Leeteuk promised to return and perform for Filipino fans next time.

The event started at 5 p.m. and frustrated Anna waited by the exit of SM Mall of Asia (MOA) Arena until it was over. Her friends who were in the area, including Pagara, joined her. When people started trooping out, they were able to call Bindoy. She told Anna to wait for her across the Arena.

Bindoy was with Jessi (not her real name) who also availed herself of the pasabuy service.

Jessi told Lifestyle that she was also worried about her ticket because she also had a hard time reaching Bindoy that day. But Bindoy eventually showed up and handed her her ticket an hour before the event.

Jessi had known Bindoy for years, but they only ever talked online. They met because they got scammed together in another case. She trusted Bindoy because of what they’d been through together. She reasoned that because Bindoy experienced getting scammed herself, she thought that she wouldn’t do it to others.

“I asked for a selfie with her because it was the first time I was meeting her. I wanted to show our friends that we finally met,” Jessi said. “I saw Anna’s group as they were approaching us. One of the girls was a common friend. That friend whispered to me that Anna was scammed by Bindoy.”

Jessi didn’t want to get involved and left immediately upon hearing this.

Bindoy gave Anna a used ticket along with an explanation that kept changing. This included Bindoy claiming that she ripped the ticket because she said she would refund Anna anyway. (Concert promoter Pulp announced that the used tickets will still be valid for the rescheduled event.) 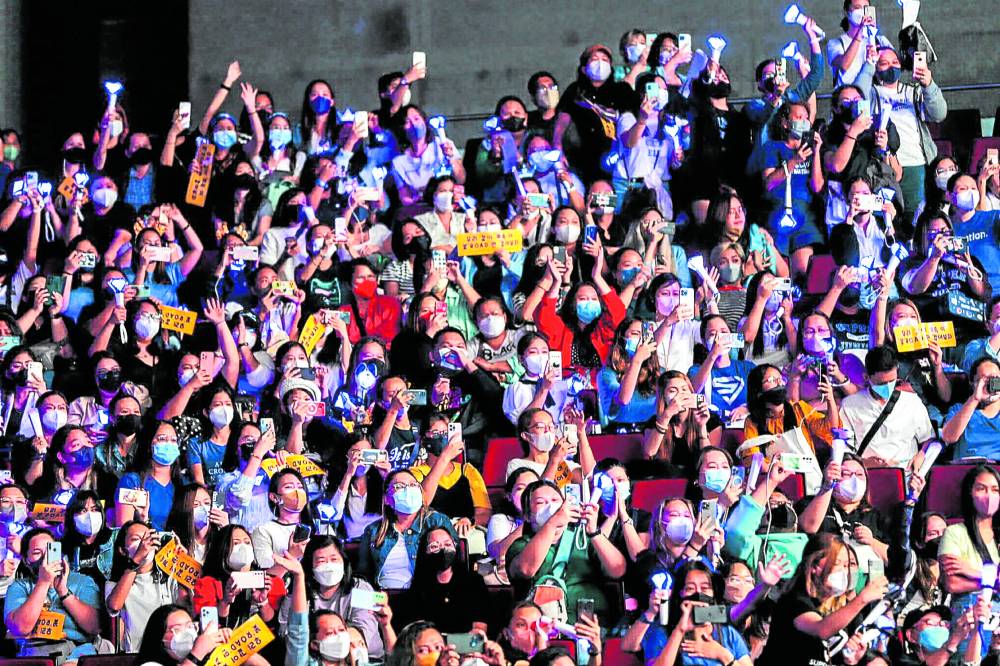 Anna’s group brought Bindoy to the MOA substation of the Southern Police District when Bindoy couldn’t give Anna her money. The police gave Bindoy a deadline, or she would spend the night in jail.

The group also found out that Bindoy was using an alias. According to them, the passport she gave the police reflected her GCash name, which is Marivic Torres.

Bindoy was on her phone the entire time they were at the police. She was texting friends to borrow P12,900. This included Jessi and longtime friend Liza (not her real name). Both turned her down because they became suspicious.

Eventually, Bindoy was able to come up with the amount. She gave P500 in cash to Anna and the rest through GCash. They parted ways at around 10:30 p.m.

Bindoy went to a restaurant for a meet-up that she organized days before. Johnny (not his real name) was one of those present. He asked her why she needed to refund the money immediately when Pulp would do it for them in the coming days. Bindoy couldn’t give a straight answer.

“I asked her where her ticket was and she said that her friend kept it,” Johnny said. He found the statement suspicious because Bindoy hosted a pasabuy, so why would she not purchase or hold her own ticket?

Bindoy spent the night at the condo unit Liza rented for an overnight stay. She arrived around midnight. “We let her sleep in the unit because it was late,” said Liza.

Liza said that Bindoy was bawling her eyes out as she related what happened. Bindoy said that she was tortured in the police station.

Anna and Pagara denied this. They even have a video of her just standing and looking at her phone. They kept their distance from her, too.

Liza and Bindoy had known each other for almost a decade. They met at one cosplay event and they immediately hit it off. Liza considered her a friend.

But even Liza was not spared Bindoy’s misconduct. Bindoy would ask her for money for fan projects. Liza said she now doubts if the money ever reached the intended recipients.

(Lifestyle reached out to Bindoy but she has not responded as of press time. We leave our lines open for her side of the story.)

That day that led them to the police station would have been the end of their interaction. Anna had no interest in pursuing a case against Bindoy. But she did post about her experience to warn others without naming Bindoy.

But the latter reacted publicly, pinning the blame on Anna. The post started with a statement that in her “entire fangirl life, she never scammed anyone.”

Bindoy also claimed that she had a “Super Standing” ticket and that she had to line up early to get a concert arm band. She said that she couldn’t find Anna. Bear in mind that she was able to go to Jessi and meet the others before 5 p.m. while she only responded to Anna with a “wait lang” text.

Bindoy also claimed that Anna was brainwashed by her friends in order to get a refund immediately. This prompted Anna and her group to bring out receipts of their own. Bindoy deleted her post. She would come out with another statement on Aug. 8 and another version of the story.

Bindoy had no ticket of her own. She admitted to lying about having a ticket in a now deleted post. The line that she queued up for was for the SJ Fiesta, a fan-led event that gave away taho, ice cream, banners, fans, and hygiene kits to fans who came in early.

According to her deleted post, she only started looking for her own ticket at 4:20 p.m. on show day. It was around the same time that Anna was at a convenience store across the Arena where Bindoy told her to wait. Bindoy later admitted in the same post that she used Anna’s ticket. According to her, she even mixed up the tickets for her pasabuy, giving Standing tickets to Seated buyers, and vice versa.

Most of the interviewees told Lifestyle that they trusted Bindoy because she was very vocal against scammers. She would even call out people online, calling them scammers, scalpers or hoarders if the reason they gave for selling their tickets was unsatisfactory. Bindoy would also call out those who raffle off tickets by selling slots.

Ironically, Bindoy also hosted a ticket giveaway. She asked for cash donations from fellow ELFs (short for Ever Lasting Friends, the name of the Super Junior fandom) to fund it. Ali (she requested her surname to be witheld) contributed P1,000.

“I just saw the post about the ticket giveaway for a co-ELF. Of course, I wanted to help others so they could watch the concert. I didn’t receive any acknowledgment for my donation,” she said.

Bindoy only listed the donors and the amount she received after fellow fans demanded transparency. According to Bindoy, the total amount that she collected was P2,670. Ali said that her donation was not in the list. The post is also now deleted but she apologized to those affected by her lies.

But Bindoy did award a ticket to someone. Trisha (not her real name) came forward to thank Ali personally when she found out what happened. Trisha was the winner of the donation drive. She received her ticket on the morning of the event.

Liza told Lifestyle that the ticket Bindoy gave Trisha belonged to Liza’s friend and it was supposed to be given to another friend, not as a giveaway. According to Liza, Bindoy still had the money for the giveaway. Liza also thought that there would be two winners, instead of just one.

The experience served as a huge lesson for the people Bindoy dealt with. They all said that they would no longer do pasabuy or only give their money to friends they’ve transacted with in the past. Ali said she would continue to donate to different fandoms, but will be extra careful.

She wrote, “You returned my money. However, you killed my dream of being with Super Junior in their darkest hour. That’s something you can never return to me.”