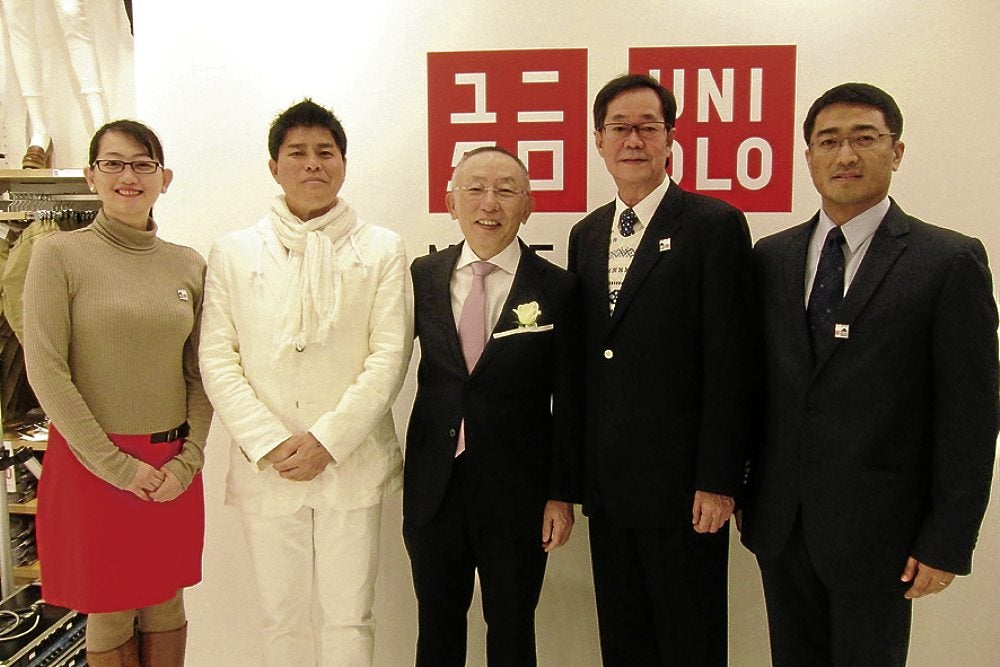 TOKYO—Japan’s richest man is optimistic of the Philippine market.

In an interview with Philippine media, Tadashi Yanai said that while the global economy is sluggish, “in countries like the Philippines, the situation is very good. Asia, for the first time, has the momentum in terms of development. There’s a huge potential.”

At the Ginza opening, a group of male hipsters sporting Harajuku haircuts and complementary fashions were at the front of the line. This thick mass snaked around the block, toward the back entrance of the store. Also in the mix were young moms pushing their tots in prams, and not a few elderly. They were a thousand strong by unofficial estimate who patiently braved spring’s early morning chill.

Katsumi Kubota is hoping Manila will top those numbers when Uniqlo opens at SM Mall of Asia in June. His boss, Yanai, Fast Retailing Co. Ltd. chair, president and CEO, is expected to attend.

“Mrs. (Tessie) Coson told me we will have 5,000 people at the opening,” Kubota said, smiling. He is also chief operations officer of Fast Retailing Phils.

Uniqlo is now in 11 countries outside Japan; the Philippines will be 12th. Its goal is for overseas sales to overtake Japan’s by 2015, and to open 200-300 new stores annually.

Yanai expressed his eagerness to enter the Philippine market, describing his counterpart, Coson, as “a very strong person.”

“Our position in Asia excites us,” he said. “We’re tapping into a $5 billion economy.”

Uniqlo is on a full-scale, Asia-centric expansion, targeting about 100 stores in the continent by August. To underscore its global growth, the brand is setting up megastores in landmark locations like that in Ginza, its ninth global flagship store, to be followed by another in the fall in Tokyo’s Shinjuku.

Yanai said that when Uniqlo opened its 5th Avenue flagship in October, its second in New York, it was the culmination of the brand’s American dream. The Ginza flagship, he said, is the Japanese equivalent of that dream.

“Ginza is the equivalent of 5th Avenue in New York or Oxford Street in London,” said Yanai. “We wanted to offer the newest, the state-of-the-art, so when foreigners come here, we’re able to express who we are as a brand.”

Uniqlo’s new outpost is a narrow building with an all-glass façade and a 12-story retail space. At 5,000 sqm, it’s the brand’s biggest store in the world.

A diminutive man with an easy manner, Yanai noted that global luxury brands like Louis Vuitton and Hermès also built their first megastores in Tokyo, the heart of the world’s biggest luxury consumers.

“The luxury brands have taken that methodology to grow their business. I think that doesn’t apply only to luxury brands. It’s also a viable method for us to go global and expand.”

Yanai is taking advantage of what he calls Asia’s “momentum” and “gold rush” by reestablishing Japan as part of Asia, a shift from many years of being “Japan-centric.”

Unlike successful trend-driven fashion chains with equally affordable price points, Uniqlo is all about well-made basics.

“The Uniqlo concept is a clear departure from apparel companies that chase fashion trends,” he said in the company’s 2011 report. “We can’t win a dominant position in global markets by simply imitating other companies.”

In the spring of 2010, Uniqlo digressed from this and sent out a collection that was more fashion-driven than usual. It alienated its customers, and sales suffered.

Yanai’s dream, he said, is for Uniqlo to “be noticed as the equivalent of strong export-driven electronics and automotive companies. We want to dominate that market.” Uniqlo is the world’s fourth largest apparel company and the No. 1 in Japan and Asia.

Yanai, however, denied previous reports that he wanted to acquire Gap, reputed to be Uniqlo’s American counterpart.

“I didn’t say I wanted to acquire Gap,” he said. “That wasn’t the message. What I said in too literal terms was that, with the status of where we are today, I said we would be able to if we want to. But I didn’t say that we would. That’s what I said. I have no intent now, or in the future, to acquire Gap.”

Then he added in good humor, “I think people in the industry think I’m a very vicious, bad person.”

Yanai also explained the nature of his company’s partnership with SM. “If we had gone into franchise operation, we will not be able to reflect a hundred percent our will and intent,” he said. “It’s better to work closely with someone from the Philippines where we’re able to commit and build business together.”

SM Retail will help in the administration and operations, according to Ricky Lim, SM Retail’s senior vice president for controllership, who attended the Ginza opening with his team.

A graduate of political science and economics, Yanai joined Ogori Shoji Co., the company that would later be known as Fast Retailing, in 1972. Often described as a self-made man, he’s responsible for growing Uniqlo into Japan’s biggest casual clothing chain. In 1999, the company went public. Yanai turned it into a holding firm in 2005.

Encouraging other Japanese companies to explore overseas markets, Yanai thinks his leadership style is unique in the Japanese context. He believes that business these days has to be global to succeed.

Yanai thinks the key to his success is his commitment to his work and being able to encourage and communicate the same to his employees.

“Our story is not yet complete,” he said, “we’re still evolving.”

Unlike other apparel brands, Uniqlo—a contraction of its original name from 1984, Unique Clothing Warehouse—doesn’t segmentize its target market. Its tagline is “Made For All.”

Interestingly, the overseer of Uniqlo’s 100-person design team is not a creative, but a man with 25 years of experience in luxury retail merchandising, both in Tokyo and Manhattan.

Yukihiro Katsuta, a gregarious man of slight build, is the Group SVP for R&D, and is responsible for signing up the likes of Jil Sander, who successfully designed Uniqlo’s +J line for a few seasons; Alexander Wang, before he became famous; and now Jun Takahashi, the designer of the cult label Undercover, who debuted the UU line for Uniqlo at the Ginza opening.

The brand’s philosophy, he said, is “simple”: “Make a simple design that brings customer excitement.”

“People ask me what do I think of Zara, H&M, how we compare to Gap, I don’t really care,” Katsuta said. “We’re completely different. We want to design clothes customers can wear for a long time. We’re proud of our quality. You can wear it not only this season but for three, five years.

“A 3-year-old +J item still looks good today. I bought Jil Sander clothes 10 years ago and I still wear them and they still look good… It has to be a simple design but has ’something.’”

When it opened in New York in 2006, Uniqlo created pieces available only in Manhattan, clothes they felt would sell only in New York. Then the company reassessed its tack; it decided that if one item sold in one market, it should also sell in other countries; the cyber age has broken market barriers.

Katsuta said his luxury retail background comes into play in training designers. “It’s very important to watch good things. To my designers, I don’t say buy it, but at least touch it. Your eye needs to be trained. Your eye must recognize what’s good or bad. I can tell right away if something will sell or not.”

At present, Uniqlo’s design team is 90 percent Japanese, but Katsuta is looking into making it more diverse.

Katsuta also related how they were able to improve on a fabric’s texture and feel—at no extra cost—solely on Sander’s idea. “She didn’t ask us for a more expensive fabric. She just told us how to weave, how to make it softer. We did it in the same factory.”

But global expansion does have its challenges. At present, Uniqlo’s manufacturing partners in Dhaka, Shanghai, Shenzhen and Ho Chi Minh could barely meet the volume demand.

The company is looking at other countries to expand production. Indonesia, Bangladesh, Vietnam and even India are being eyed for this, according to Yoshihiro Kunii, Group SVP for Production.

Uniqlo is able to keep prices low because of the SPA (Specialty store retailer of Private label Apparel) business model, under which the brand controls everything, from the purchase of materials to product design, manufacturing and retail.

Kubota, the Philippine COO, knows he has his work cut out for him. Coson has already given him a list of other possible SM malls where they could open a store. But surveys revealed that only 60 percent of Filipinos have heard of Uniqlo, the lowest in brand awareness in Asia.

He’s not cowed. “Since they don’t know, it’s a good opportunity to make the brand known. We can explain who we are. That’s a challenge.”