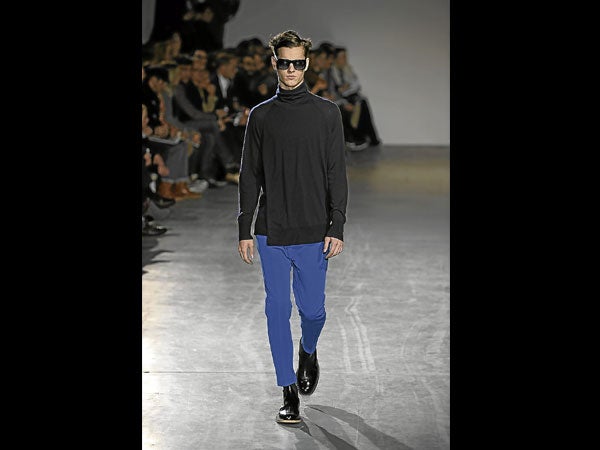 There were several interesting things at the Yohji Yamamoto men’s Autumn Winter 2011 show, apart from the tailoring and subtle details that make Yamamoto the living legend that he is: The shoes, colors and prints on the jackets.

Several of the shoes were more casual than what he has perhaps shown in the past: Sneakers, or what is called “baskets” (short for basketball shoes?) in France.

Yamamato has shown baskets in the past—in 2009, 2007 and other years—but not quite like this season’s streetwear-inspired designs and colors, at least not for the classic Yohji Yamamoto label.

It was a departure from the past that worked well: Red-soled gray baskets that appeared to hug the feet like a tight turtleneck sweater, black baskets with mesh where laces should be and a partially open toe box that looked part aquashoes.

A pair of red-soled white baskets with black straps across one end of the upper to another looked from afar like an approaching windshield. A red pair with a large X at the tongue was all fun. These spirited items were part of the Adidas for Yohji Yamamoto collection to celebrate 10 years of collaboration between the designer and the sports brand. A film titled “Yohji Yamamoto: This Is My Dream” will also be out in time for the 10th anniversary.

One could, of course, see the trademark Yohji in the pants and jackets, and the relaxed and elegant feel of the clothes. Then there were the quirky details: An almost neon-blue leather of shiny bright red half of a lapel, and standout eagle prints on the chest and back of black coats.

Because he is the designer of Dior Homme, you would expect only the best from Van Assche. The anticipation was strong, and the venue filled to the brim. From the start, three silhouettes were apparent: Slightly sharper shoulders and a casually fitted bodice, round oversized sweaters and a relaxed understated aesthetic with a stronger sportswear feel.

A perfectly constructed sweater vest, layered and paired with soft pants tucked into lace-up boots, was part-lounge, part-elegance, part-street. The next few looks embodied the same appeal, until a stricter jacket reminiscent of the torso part of a priest’s black robe came on—a look that showcased very good tailoring skills and a somewhat restrained design aesthetic.

Still, when these one-off pieces broke with the street-cum-lounge mix of each look, what was always apparent was the focus of the collection: A softness and casual elegance that only somebody with enormous talent could whip up.

The accessories were born out of a collaboration of Van Assche and Eastpak and had the same feel as the clothes: Sporty yet stylish. The shoes remained on the sporty side and could perhaps be used on most non-professional terrain for trekking or walking, while the bags showcased the brand’s values to the hilt.

In them, one could see several functional details—zips, handles and roominess for travelling (light)—and graceful colors: A laidback shade of brown, blue-grey and the requisite black. The shapes gave off an air of effortless chic.

The concept was fun and completely in context with what the brand stands for. What went on backstage during a fashion show became show itself. The music was muffled and coming from the real backstage, which in the show was meant to be the catwalk.

The models were in a line awaiting their turn to be styled and dressed, each dresser clothing a model in one piece as he went out around the stage, until he was ready with a complete look to go out onto the catwalk, which of course was, technically, backstage.

There were, in this concept, the “deconstructionist” aspects that the brand had first been associated and labelled with in the late 1980s, and a kind of irony in showing the inverse, or the other part of the reality that happens during fashion shows.

The looks, as always less conceptual but no less great as the women’s lines, included mid-thigh jackets and thick sweaters. Wonderful patchwork-inspired designs, some padded and some not, of various rich fabrics, completed the ensembles and made for a fashionable men’s show.

Swedish-brand Acne is known for its very “cool” aesthetic. The brand began with unisex jeans in 1996 and from there began to create quiet pieces with a slight streetwear appeal. This ethos, created and headed by Jonny Johansson, continues season after season. In its womenswear one can always see a very modern and luxurious feel, even in the designs that remain trendier or more colorful.

In the men’s show in January, this same aesthetic was seen. Almost-neon sweaters were paired with sharply cut jackets and elegant slim pants. Proportions were just a little off-kilter: A sweater’s hem, for example, would be expected to be by the hips; in Acne it ended at the waist and therefore offered a fresh approach.

In the bright turtleneck sweaters were the same restrained feel, and when paired with a black coat and above-the-ankle pants, offered an aesthetic that was not quite streetwear but more quietly chic.

The men’s pouches were particularly exciting. Although already seen in previous seasons, they were not as fleshed out; these, for sure, could be worn anywhere.

Perhaps because the brand ventured not just into fashion but also graphic design, advertising and its “Acne Paper,” it has learned the delicate balance necessary in creating a world of one’s own. Or maybe, in the end, the creative collective has begun to master the art of fashion and commerce.

Walter Van Beirendock, a designer of the famed Antwerp Six, showed a tight and sophisticated collection during men’s fashion week.

There were his trademarks: Color (reds and brights), drawings akin to doodles to make for a graphic look and nubby knits. There was a skirt or two and a cape (in previous seasons made from ropelike fibers or plastic) that looked like a living object, reinterpreted in a colorful knit.

One ensemble consisted of a skirt, and coat with a bowtie at the neck, and not at all “gay” as many people would read. It all looked perfectly straight, completely wearable and matched with equally as fitted pants in the same shade. It was as easy on the eyes as the checked shorts that were worn over checked pants.

Compared to seasons past, one could see a more orderly aesthetic: Linear forms, neat patches and buttons to reign in the arms and body in coats and jackets. A light-blue coat was whimsical, a beige cape-jacket simple, a tweed suit stylish. The collection, it seemed, had something for everybody—everybody, that is, who wanted a piece of this creative and original vision.