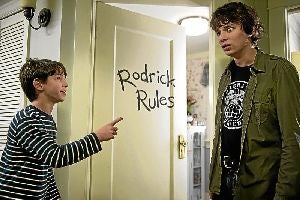 IT’S TOUGH being a middle-school kid finding your place in the world. But it’s even tougher having an older brother whose pastime is to torment you.

In the film adaptation of Jeff Kinney’s novel of the same title and sequel to last year’s “Diary of a Wimpy Kid,” Greg recounts how he has to not only deal with mid-school issues but must also fend off his bullying older brother, Rodrick.

Worse, his mother, concerned over the siblings’ relationship, forces them to spend quality time together, which isn’t exactly the best idea for the two.

Their sibling rivalry becomes a love-and-hate relationship filled with mindless pranks, adolescent pains, and ultimately teaches lessons on family, trust and friendship that can churn out good laughs from both kids and adults alike.

As in the book, Greg, now on seventh grade, is growing up and he recounts his daily life while reading through his diary. We see him continue to look for his place in the middle-school hierarchy, constantly try but fail to avoid public humiliation, and devise ways to impress the cute new girl in class—things that a kid his age normally does.

This is where the film does an effective job, tackling tween issues without going beyond the life of Greg as a mid-school student yet managing to deliver memorably funny scenes. 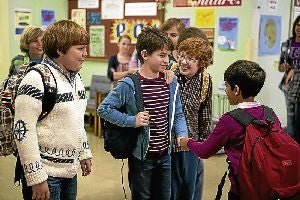 In his mind, parties (where alcohol is replaced by sodas) are awesome. Roller-skate dances are cool. Being noticed by your crush is everything.

Life as a ‘tween could have been easy for Greg if not for his bully brother Rodrick. While there are a lot of mean older siblings in reality, the film takes sibling rivalry to a different level but keeps the family audience in mind.

Rodrick’s pranks—letting Greg sit on chocolate to let everyone in church think he pooped in his white pants, and locking him up in the basement as he holds an illegal house party with friends—may prove too much for an ordinary middle school kid. But not for Greg.

In the film, we see him look past his older brother’s horrible acts of bullying and actually finds time to genuinely bond (and have fun over fake vomit, no less), something that is absent in the book.

In fact, the film, which, like the first film, ultimately ends up as a family or values-oriented tale, shows a softer side of the bully Rodrick and works its magic through the interaction among Greg’s family and friends, who all predictably resolve their issues in one big talent show.

The star and narrator of the film is Greg (Zachary Gordon), but there are moments when Rodrick’s silly yet entertaining persona takes the spotlight away from him. Gordon is perfect for the role of the wimpy runt but it appears he’s growing up too fast. It might be a good idea for the filmmakers to milk the most out of him before he outgrows his role.

Devon Bostick, who plays Rodrick, appears a bit too mature for his role, but he actually delivers a solid performance as a rock ‘n’ roll, rebellious, high-school punk.

Greg’s ever-so-loyal best friend, Rowley (Robert Capron), returns and is once again treated as the gullible yet highly amusing sidekick.

Other cast members are Rachael Harris and Steve Zahn, who play Greg’s parents, Susan and Frank, respectively; and twins Connor and Owen Fielding, who play Manny, all take a backseat in this film but manage to put their stamp on memorable lines.

The clever dialogue, the tween issues that aren’t overdone, and the good ol’ family fun make “Diary of a Wimpy Kid: Rodrick Rules” a welcome addition to the series, which can potentially become a success provided that its young cast don’t grow old too fast.

It’s one of those book-based films that is genuinely funnier than the source material.