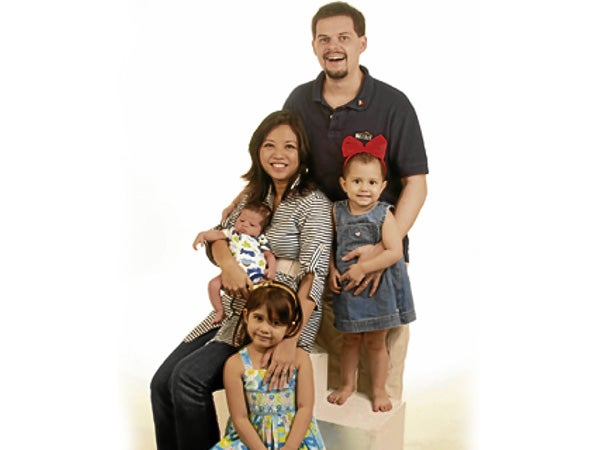 Inspiration, just like passion, doesn’t have to come with booming trumpets and Nobel Peace Prize awards. Usually, they’re just waiting to be discovered right under our nose just like in the case of my new mommy friend, Anna.

Whatever inspiration you may be looking for, I hope you find it in her story.

When Anna Meloto-Wilk graduated from Ateneo de Manila University, she had visions of climbing the corporate ladder and becoming a big success in marketing and advertising.

She never imagined that she would instead end up tearfully washing a dozen poop-filled diapers shortly after giving birth.

And she certainly never thought that, without any business experience, she would be president of her company.

But I am getting ahead of myself. Anna did enter the corporate scene and spent four successful years in traditional capitalism.

There’s nothing unusual in this until you consider that Anna is the daughter of Gawad Kalinga founder Tony Meloto. What was she doing in the corporate world?

Just like every daughter, Anna needed to spread her wings and “find her own voice,” away from the larger-than-life shadow of her father.

Four years later, however, she had an epiphany. The GK movement was beginning to surge and it needed people. Anna had been involved with GK since she was 16 but laid low while she was in advertising.

“I was having second thoughts about my choice. Here I was handling accounts with brands that had enough budgets to build three villages but I was spending it all on advertising! It was hard because I was already comfortable. I already had my routine but at the back of my mind, I thought,  ‘So many other people can do this job that I am doing. And so many other people have done it before me. But there’s this golden opportunity to do something significant, to do something that can really make changes in a country that badly needs it.’”

That was all she needed to realize that the passion she had been searching for was right there all along.

Soon, Anna was back home in Gawad Kalinga. But life wasn’t done handing out surprises just yet.

Soon, a highly successful British businessman-turned-humanitarian and GK volunteer, Dylan Wilk, came into her life and before long, they were married.

And here is where we find Anna washing those soiled nappies.

Long before their first child, Anna and Dylan had already agreed on certain things. The first was Anna would breastfeed; this was absolutely non-negotiable.

The second was the use of cloth diapers. Upon learning the adverse effects of the ordinary disposable diaper on the environment, the couple decided that no matter how inconvenient, they would do their part to protect the planet while raising their family.

Listening to Anna describe her first few postpartum weeks was hilarious. I’m sure that, at that time, there was nothing funny about those tear-filled moments, but years later, listening to anecdotes and memories, you almost miss those moments. Almost.

We had a good laugh as she recalled the unusual sight of Dylan walking by, in his macho board shorts, to sit down before a tub to wash a pile of soiled nappies. While Dylan took to washing easily, the new mom had her initial discomfort but eventually got the hang of it—after they bought a washing machine.

The young family was living in the US at that time. It was there that they discovered the many organic products available to the public. Before long, with younger sister Camille, they hatched the plan to produce a natural organic line of baby and beauty products.

“Dylan would have preferred organic Ferraris. Beauty was so not his thing but it was also a natural offshoot of our ‘life stage’ at that time because when we started in 2007, I had just given birth to my second child.” (Anna has three kids, going on four!)

The couple also had been searching for another way to create a positive change in the country.

“It was an early awakening to the fact that we have more in common with the poor than we realize. There’s this tendency to think otherwise because we grow up in a vacuum. We attend private schools, go around the city in air-conditioned cars, but we can’t really go on living with blinders on just so our lives remain comfortable.”

Anna adds, “People like us, who had the opportunities to see what’s possible in the rest of the world, have a responsibility to do something to change things. Of course, I believe in change from the ground up as well but I think there has to be a concerted effort of everyone coming together. For the longest time, we’ve been relying too much on government to make the changes without realizing that we have the power to do it also.”

With this mindset, Human Nature was born in November 2008.

“In the beginning, all we had was passion. We would take turns having breakdowns!” Anna recalls with a laugh.

From simple and basic baby needs such as body wash and lotions, the brand has since expanded into a full line of adult skin care and cosmetics, all at affordable prices.

Anna’s father always reminds her that when “the problem you’re trying to fix is so huge then the response has to be massive!”

And so, addressing the problems of poverty, sustainable development and livelihood projects, Human Nature has several responses.

The first is to be pro-Philippines—to use only locally sourced products (unless there is absolutely none available) and choosing to manufacture here even if outsourcing abroad costs much less.

Anna explains that for as long as our farmers rely only on income from the sale of raw materials, rising above their situations will always be difficult. But if they can learn and be trained to turn raw materials into valuable commodities, there is hope of better income and future.

For instance, lemongrass (tanglad) sells for practically nothing, but as essential oil, its price increases dramatically.

The second response is to be pro-poor. Right from the start, there was no other option than to engage in the Fair Trade Principle, which means taking a good look at the numbers and seeing how much must really be paid the farmers for their products. Always, this is worth much more than the going rate.

Another was to create a hiring program that would ensure that a third of the employees are from GK villages. To promote the “dignity of work,” Anna believes in giving the employees what they deserve; a fair living wage above the lawful minimum, with full benefits and rights.

“Actually, in the case of some of our products, 100 percent of their proceeds go back to these communities. For example, the profits of our best-selling product, citronella bug spray, goes back to the citronella farmers in Bicol. In the beginning, we earned enough to provide them with health-care insurance, expand their farm lots from 7 hectares to 47 hectares and repair the local public school. The benefits are not just monetary. In consultation with them, we ask what are their needs so that it is not just those directly working in the farms who benefit but the entire community as well.”

And the third response, pro-environment. Every decision is carefully studied to ensure that no harm to the environment comes from it. Every product must be all natural, with no toxic processes involved and packaged in recyclable bottles.

Tagalog is a given considering that Anna is determined to raise her children to be proud of being both Filipino and British.

The closeness between mother and son is evident. She is obviously hands-on with him and his sisters, Ariel and Chloe.

“Hands on?—I try, every day. I try my best. There are good days and bad days because of having to deal with three kids with different personalities and different interests. You just try to listen to them and be there for them as much as you can.”

Fortunately, with Dylan in charge of the operations, Anna is free to leave the office by 3 p.m., to be home when the kids arrive from school.

Anna doesn’t hesitate to bring her children to work or to wherever she has to be.

“Sometimes, us moms, we’re defensive about it but what can you do?

“Childhood is fleeting, before you know it, it’s gone. So if I can, ok, I’ll bring them. And I think when they grow up, they’ll look back on these times and say, ‘Oh, my mom felt like I was important enough. She always brought me with her.’ It helps with their confidence. It is different now from before when kids were seen, not heard. They’re just happier when they’re noticed.”

As we wrap up our conversation and the two make their way out the café to meet with the rest of their family, it seems that it is not only her children who are happier. It is also the woman who is able to find her passion in life.

Whether a mother chooses to devote herself solely to her family or to share her time with a cause or career she firmly believes in, one thing is clear, the opportunities to be more than what we ever dreamt of, are boundless to those who seek.