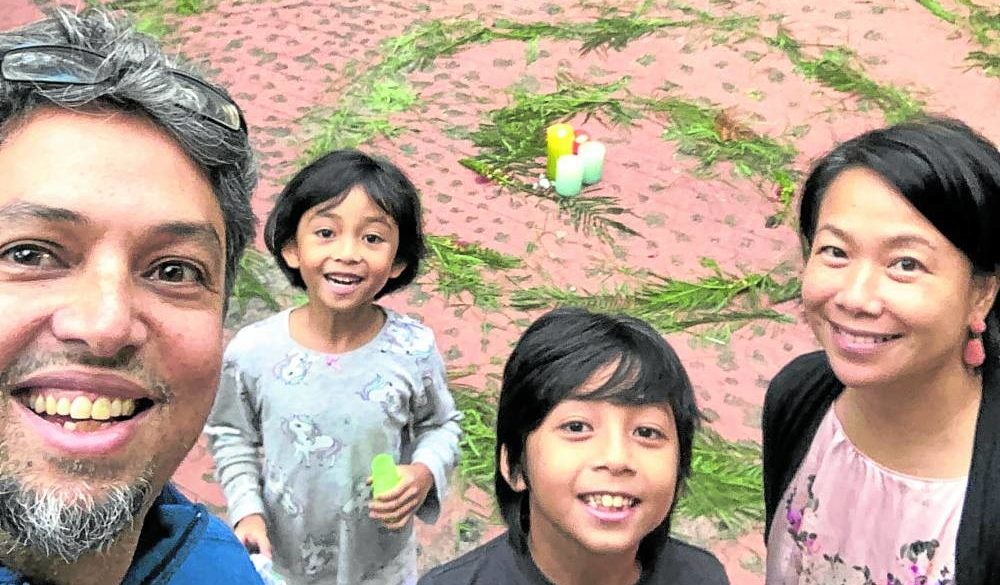 Children and loss: How Kidlat de Guia’s family is coping

Last March 8, Filipino-German creative Kidlat de Guia made a 15-minute call to his Baguio-based family from his Airbnb in Madrid. Speaking to his wife Lissa and their kids while putting on his socks, he said, “I’m on my way out.”

He never made it.

The right-hand man and eldest child of National Artist Eric de Guia (a.k.a Kidlat Tahimik), he had egressed his father’s six-month installation at Palacio de Cristal. Organized by Museo Nacional Centro de Arte Reina Sofía, the exhibit, “Magellan, Marilyn, Mickey and Fr. Damaso: 500 Years of Conquistador RockStars,” presented wooden sculptures interpreting the effects of colonialism and the Filipinos’ cultural dilemmas. It had attracted a record of half a million visitors.

Two days after the end of the show, the younger De Guia was found sprawled on the floor by the door of the Airbnb with his socks on but with no shoes.

Later in the day, Lissa, Kalinaw, 9, and Amihan, 7, were in bed when her phone started to vibrate. Kidlat’s cousin broke the news. Overhearing the conversation, the children asked, “Did Taty die?” She embraced them as they wept. In a fit, Kalinaw wanted to run out of the room. Lissa held him firmly and insisted that he stayed put. “I went into Mommy mood—I had to hold space.”

Kidlat, who was two months shy of 47, died of natural causes, according to the coroner. The family chose not to have an autopsy as it would delay the departure of De Guia’s family and jack up the costs of travel. To this day, the cause of death is unknown. “We spoke right before it happened,” recalls Lissa.

A seasoned theater artist, Lissa had performed in musicals in Germany and in the United Kingdom. Her fluency in German made her a good match for Kidlat, who spent the summers with his maternal grandparents in Munich. They met in 2007 and married in 2011.

Kidlat was a freelance photographer, editor and filmmaker and helped out in the family’s Ili-Likha Artists’ Wateringhole on Assumption Road, Baguio.

With an extensive writing career, Lissa was managing editor of Town and Country Philippines, and has written three biographies, documentaries and audio-visual presentations, and continues freelance work.

This Friday at Manila House, Lissa, 49, is launching her book, “People I Have Been,” a collection of essays on meaningful experiences. Some are articles written for the Baguio Chronicle while others read like stream of consciousness journaling. (It can be ordered from atmaprema.global,)

The book is published by Atma Prema Wellbeing Group, a specialist in programs on self-transformation through nurturing the self and attitude change. The book will also be sold at the Frankfurt Book Fair on Oct. 19 to Oct. 23.

It seemed that coping with grief would be not difficult for Lissa, who has evolved into a teacher of Self-Love Solution at Atma Prema. This program develops nurturance for the self which arises from activities that promote growth.

Lissa admits that she was propped up by a grief counselor. “Sometimes you feel a little crazy when you’re grieving. It’s helpful to have someone say, it’s okay. It’s still hard. I still miss him as the time passes.”

Fortunately, her sister and her family planned to spend some time in Baguio that March. Her cousins were also visiting the city. They rushed to the De Guia household upon hearing the news. During Kidlat’s wake, the children played with their cousins who likewise kept them company in the first month of Kidlat’s demise. At times, they would hug their mother and say, “I miss Taty.”Independence

Six months since Kidlat’s passing, and the family has been holding up.

“I’ve always been independent. Kidlat was a filmmaker. I never knew when he was going away for a shoot. I’ve been equipped to be alone with the kids. I make sure everyone is well fed and gets to school on time. I took on Kidlat’s chores—reading bedtime stories, bath time and clearing dishes. While my parents are in Baguio, I ask of their presence. The kids have sleepovers,” says Lissa.

“The hardest part about solo parenting is the need for companionship. I miss having a friend to share the wins and other good things. It’s different when your partner is there. With kids, I remind myself that I’m not here to change their feelings. If they say they miss their Taty, I make sure I am their safe space. They can tell me they are sad. I allow them to express themselves,”

She doesn’t believe in the common practice of telling the eldest son to behave like an adult. “I don’t say, ‘You’re the man of the house’ to a 9-year-old.”

The children comfort her when she grieves. Although she appreciates their outpouring of love, she tells them that ultimately, it’s her job to make herself happy. “I don’t want them to be co-dependent.”

When the children ask why people die, she explains to them that everything comes to an end. “That’s the nature of earth school,” she says.

In her spiritual practice of Eckankar, she imparts the belief that the soul is eternal. Although the body, vehicle of the soul, may perish, the soul moves on.

Kidlat still lives on in his words, his actions and memories. “I would say to the children, ‘What would he be doing? Do you want to write a letter or make a drawing?”

It was customary for Lissa to prepare a cup of coffee in the morning and a glass of wine for him at night. The children observe that she has maintained those habits of sharing as if Kidlat were still around.

“Yesterday they talked, ‘What do you think Taty would do?’” The siblings would recall that on coming home, their father would bathe, lie down on the couch and prepare the fireplace. Whenever they feel sad, loving memories serve as a soothing balm.

“Thank God, I have children who love each other so much. They have minimal bickering. There is no need for play therapy,” she adds.

As a parent, Lissa acknowledges her children as unique individuals. “They deserve respect. Their feelings must be acknowledged, yet you must assert boundaries.”

She observes that an hour-long tantrum has reduced into a couple of minutes. “I tell them that I see their pain. ‘If you are angry, go to the room. When you are ready to talk, come to Mommy.”

Lissa adds that children feel safer when there are boundaries as they lend a sense of order.

For herself, she has created her little game of harnessing her “super powers.” “I’m quick-tempered. When I remember that my superpower is calmness, the tonality and volume of the voice changes.”

Last July, an earthquake shook Abra, setting off landslides and crumbling of buildings. Kalinaw asked what if the Big One, similar to the 1990 catastrophe, struck Baguio? Lissa maintains the value of mindfulness of the moment. “Deal with it when it happens. Don’t worry about the future that we can’t see.” —CONTRIBUTED INQ