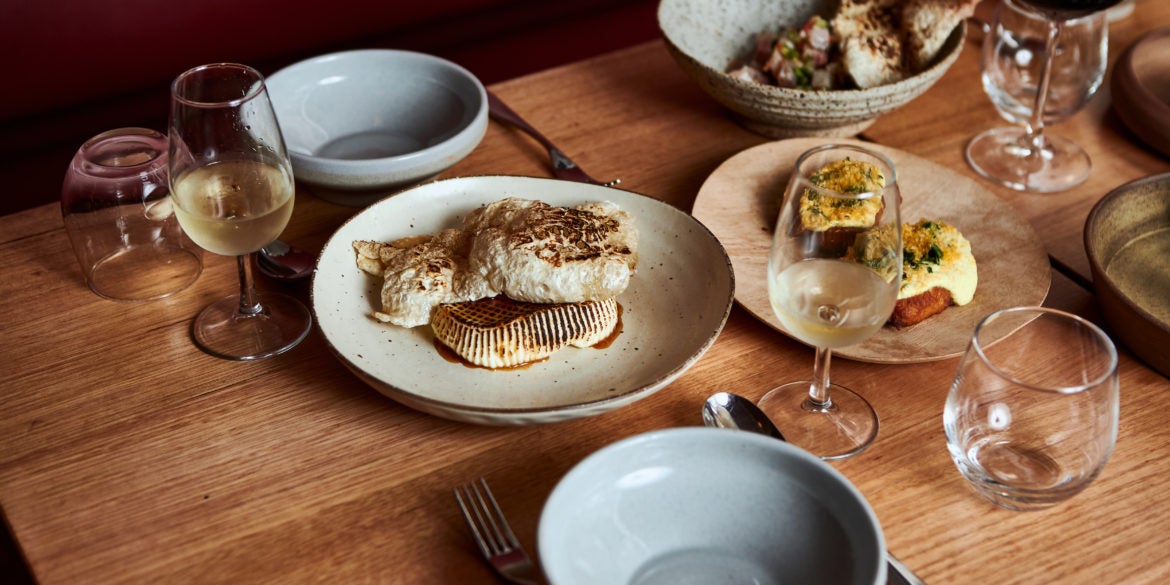 Perhaps one of my favorite things about Melbourne dining is its departure from all the cultural clichés people typically associate with eating out. It’s a melting pot of diverse flavors and experiences that don’t really follow a rule book.

From family-owned restaurants passed on through generations, to humble cafés, and speakeasies scattered throughout the city, Serai is the latest addition to the city’s vast gastronomic portfolio. Tucked in a laneway just off Little Bourke Street, its exteriors are unassuming.

Guarded by three black and white murals that subtly nod to Philippine landscapes and living, the restaurant is sealed off from the cold by two hefty industrial doors painted a deep red. Its exact address, 7 Racing Club Lane — admittedly tested my navigation skills — leaving me to argue with Google Maps for a good five minutes just before finding my way right in the nick of time.

A cinematically-lit space with industrial accents, Serai perfectly encompasses all the exciting aspects of Melbourne dining. “It kind of reminds me of a Filipino gathering,” I mention as I sit down with Ross Magnaye, Shane Stafford, and Ben Waters. Aside from being the founders of Serai, the three also share a deeply rooted friendship. Something they’ve utilized to Serai’s benefit.

Not a single empty seat in sight, I think the last time I saw a space this packed was when I attended a family reunion a few years ago. However, it’s important to note that Serai isn’t your average Filipino restaurant. In fact, it goes against a lot of traditional Filipino characteristics when it comes to dining. It takes all the best Filipino flavors and crafts them with the best Australian produce. “I think the most important thing is that we don’t really push it to be like, hey, come eat Filipino food. We don’t really force that. It just comes naturally,” notes Magnaye. After moving to Australia at 15 years old, Maganye pursued culinary arts at Melbourne’s William Angliss Institute which later brought him to Brazil and Thailand. In 2017, Magnaye even flew to the Philippines for a one-night-only event with Toyo Eatery Kitchen. Soon after, he went on to work as head chef for highly acclaimed Southeast Asian restaurant Rice Paper Sister.

I think the most important thing is that we don’t really push it to be like, hey, come eat Filipino food. We don’t really force that. It just comes naturally.

Now helming Serai alongside Stafford and Waters, the three emphasize the importance of their rapport and how it’s played a role in the formation of their latest venture. “We’ve always had a passion for food. I’ve been overseas working all around the world, and through Shane, I met Ross. We all love food and all of us love to party as well, and that works well in restaurants. Three personalities really represent what we’re doing now,” mentions Ben. “The number one thing we have is the vibe. We may all be vastly different, but these three personalities create this. It makes it fun.”

Throughout the evening, we were served a multitude of dishes that encapsulated a lot of flavors familiar to the Filipino palette but were also distinctly one of a kind. Starting off with a version of Tuna ‘Sinuglaw’ that was served with crackling chicharron, we then moved on to ‘Selat Lumpia’ which incorporated the bright flavor of pineapple, spiced coconut, and smoked caviar, and finally ‘Kare Kare’ hash browns served in a peanut sauce and salted duck egg. A contemporary approach to something usually conventional, each dish served always has a unique contrasting element to it. “The thing is, I’ve grown up eating Filipino food, and Shane’s very creative in the sense that he’ll look up a Filipino dish on Google and be like, what can we do with that? It’s interesting how he’ll find ways and be like would you try it like this? And I’ll be like, sure. So in that way, it works for us, being creative in that sense.” Magnaye shares.

To my surprise, when I initially arrived in Melbourne, I struggled to find Filipino restaurants. Compared to other cities, they seemed to be a rare breed despite Filipinos being the fourth largest immigrant population in Australia. However, when it comes to Serai, “Filipino food” is defined in its own terms. “It’s not traditional, we’re still Australian.” clarifies Stafford. Using their well-loved Seared kangaroo ‘Kinilaw’ as an example, he explains Serai’s approach to crafting their dishes. “For the Kinilaw in the Philippines, they traditionally use goat which is very lean. So here, we use kangaroo instead to do the same dish and we put it over bone marrow. The flavor is 100% there, but it’s also completely different,” he explains. “Filipinos who have never eaten Kinilaw, they can be like well, it’s something I’ve never tasted. But to those who have, it gives off a sense of nostalgia. It’s always about deliciousness”.

Clarence River Prawns with spiced buro butter and sweet pandesal graced our plates as we began to ease our way into mains. A harmonious marriage of comforting flavors, we devoured everything in front of us so quickly that the Gippsland lamb ribs in sticky ‘adobo’ sauce couldn’t come any sooner. Our main dish, the lechon, was our final treat for the evening. Served generously on a plate lined with a pineapple glaze, its crispiness and bright flavor topped off the evening gloriously.

As plates rolled out through the evening, I sat in my chair trying to comprehend how all of these dishes had elements that were so traditional but also felt like completely new. Simply put, Serai’s menu feels like a love letter to Filipino food, extracting all the best parts of our country’s culinary vigor and creatively transforming each dish into a personal homage for others to enjoy. It’s approachable and modern, traits that aren’t normally associated with the cuisine that balut originates from but is exactly why Serai is Australian just as it is Filipino. 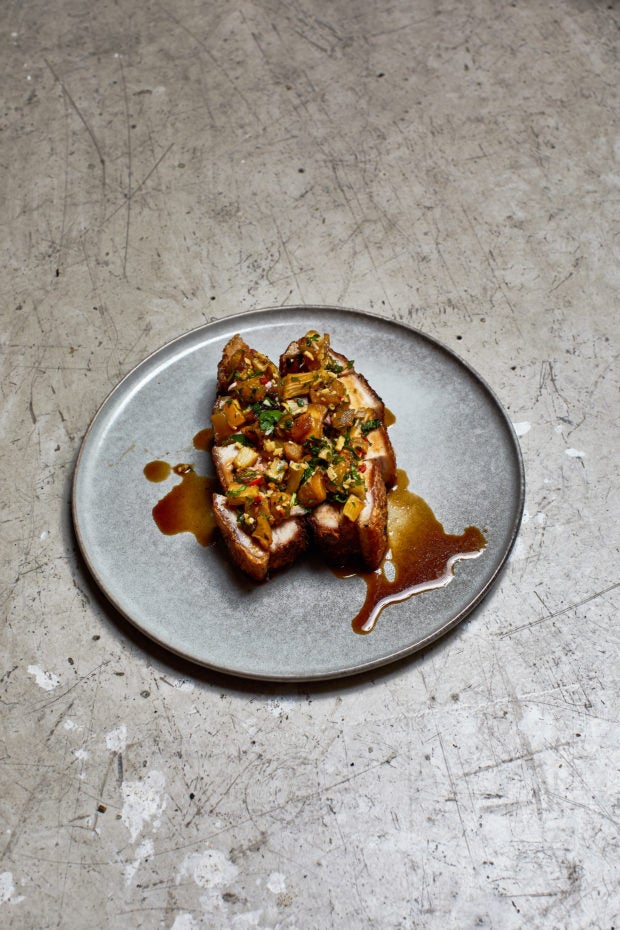 Aside from their exceptional food, it would be a great disservice for me to leave out Serai’s charming service. One of the highlights of the evening was when Nick, one of Serai’s new hires, actually took the time to sit down with us and ask how everything was going. The conversation, although brief, was far from small talk and felt honest and sincere. Think, catching up with an old friend you hadn’t seen in a long time. A far cry from typical hospitality chatter that feels like an endless feedback loop of “How’s everything going?” and “Let me know if you need anything else!”. This, combined with all the other elements aforementioned made the experience even deeper and more personal.

“Our service reflects who we are,” Ben notes as I share with the three of them my encounter with Nick. “I spent so many years in top hotels working with 5-star service and people sit there and it’s so boring. We wanna give 5-star service and I tell my staff– be yourself. As long as their glass isn’t empty and you get there before me, you’ve done your job,”. Paired with their cocktails cleverly crafted by bar manager Ralph Libo-on, Serai has everything you could possibly need for an exceptional night out. One of our most memorable drinks of the evening, the Ube Wan Kenube, was delicious just as it was impressive if only for the fact that Star Wars references are always good, and even better when they’re mixed with rum and ube.

As for what’s next for Serai, “We want to nail this thing we are doing now. We want to make sure to continue knowing that the products are good, consistency is a must. People coming in and just getting better with the food and the service– staff training. Then we’ll see an expansion later on, but we want to be careful with that,” says Waters. Having just scraped the market’s surface, Filipinos and Melbournians alike have much to look forward to with Serai championing the best of Philippine cuisine through the contemporary Australian’s perspective. Exhibiting an indisputable mastery of a great vibe, Serai’s founders had much knowledge to impart to those seeking to find their footing in the culinary industry.

You have to find your own style and properly know what you want to do.

“I think my advice is yes, work in the best restaurants in the world and at the end of the day– make a decision about what you want to do. Don’t get pressured because even if that’s the best restaurant, you don’t need to work there. You have to find your own style and properly know what you want to do. For example, you work in a restaurant and you’re told to cook chicken– at the end of the day, you have to decide how you want to make that chicken. So when I was working in restaurants, I would just be looking at the food and their service, how to run a business and a staff and that’s really important. But now, when I go to different restaurants– that’s how I look at it, how they treat their staff, and what the vibe is like.” Magnaye says.

Continue exploring, but for us as hospitality people– you’ve got to get your degree and the world is your oyster.

As for Waters, “For those who are studying a business degree, let’s say, and they’re not sure what they want to do. They might be working in a restaurant or whatever but keep going with that degree because that opens doors. I’ve worked in 6 different countries in the last 15 years and the culture or the exchange I’ve heard, working in these places– is not like anything else in this world. I’ve traveled for so long and I stick to what I’ve been doing my whole life. Continue exploring, but for us as hospitality people– you’ve got to get your degree and the world is your oyster. You can travel and experience different cultures and it’s like a working holiday.”

Whenever I travel, it’s almost automatic for me to log into Google and search “Filipino Restaurants nearby” no matter what country I may be in. I’m not sure if it’s the Filipino in me or if it’s just the curiosity of discovering different versions of food that’s familiar, but I suppose you could consider it a safety blanket that I keep in my back pocket for days that I might miss home but don’t quite want to leave where I am yet. It’s a strange feeling of nostalgia and novelty that you only ever achieve when you marry two completely different things and create something new altogether. This is exactly what Serai is. It’s something familiar but also completely new at the same time. A marriage of Filipino flavors and contemporary Australian ingredients, it’s no surprise that they’re proving to be an undoubted force in the Australian culinary scene.