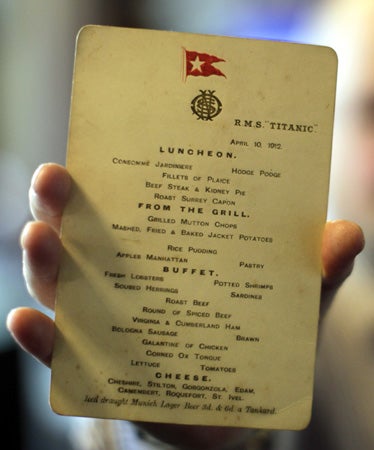 A member of staff from the Auction house Aldridge and Son holds an original Titanic menu from April 10th 1912, that has recently been sold for 76,000 pounds (US$122,000 euro91,000) which is part of a unique exhibition relating to the ill-fated liner on display at Belfast City Hall, Northern Ireland, Friday, April, 6, 2012. AP PHOTO/PETER MORRISON

NEW YORK—A New York restaurant is recreating the menu served to first class passengers on the doomed Titanic — and at 10 courses, it’s a spread that could practically sink a ship by itself.

Starting with oysters and ending with Waldorf pudding, by way of foie gras pate, roast duckling, lamb and five other dishes, the feast promises “an elegant evening of dinner and revelry,” Brooklyn eaterie Prime Meats said in its newsletter.

The $115 menu will be served April 15, the 100 years anniversary of Titanic’s sinking in the north Atlantic, with the loss of 1,514 people sailing on what had been considered an unsinkable ship.

Prime Meats asks customers to come dressed up in black tie as they commemorate “the notorious voyage” in the spirit of its pampered first class passengers.