The fire and intensity of the quiet Imelda Cajipe-Endaya | Lifestyle.INQ ❮ ❯ 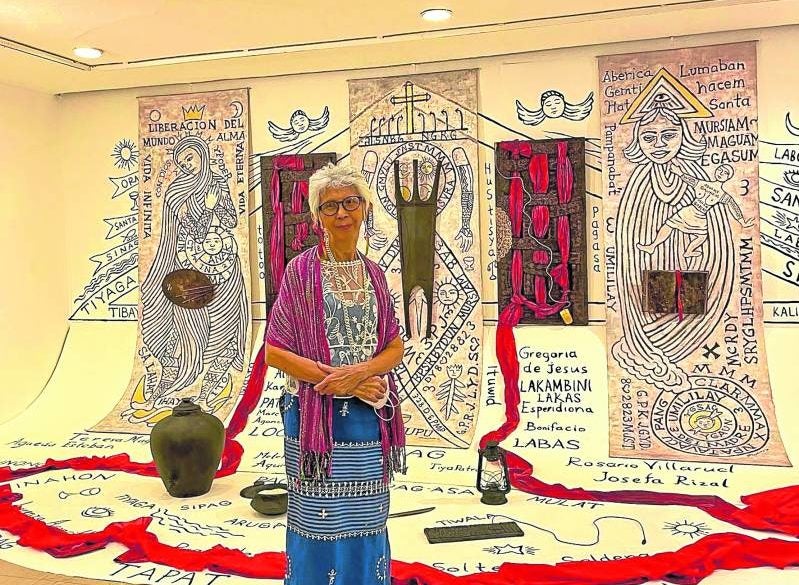 Imelda Cajipe-Endaya at the opening of her retrospective —CONTRIBUTED IMAGES

The fire and intensity of the quiet Imelda Cajipe-Endaya

Imelda Cajipe-Endaya belongs to a rare breed of artists who combines art and scholarship. Over 200 of her artworks and archival materials on Philippine historical images done over the span of 50 years are now exhibited in a retrospective titled “Imelda Cajipe-Endaya: Pagtutol at Pag-asa” (Refusal and Hope) at the Cultural Center of the Philippines’ (CCP) Bulwagang Juan Luna (Main Gallery) and adjacent hallways until Dec. 4.

A printmaker, social realist painter, mixed-media and installation artist, curator and art project organizer, Cajipe-Endaya (known as Meps to friends and acquaintances) is known for her art advocacy focused on women and centering on our nation’s history and culture. She is the founding president of Kasibulan, a feminist arts organization active since 1987. She initiated and became the first editor of Pananaw: Philippine Journal of Visual Arts, the first publication of its kind on Philippine art.

Consistently exploring the themes of national identity and people empowerment, gender, race, migration, displacement and globalization in her artworks, Cajipe-Endaya earned local and international recognition such as the gold medal in printmaking from the Art Association of the Philippines in 1979, Mayi Critics’ Choice in 1980, CCP Thirteen Artists Award in 1990, Cheju Pre-Biennale Special Award in 1995, Patnubay ng Sining at Kalinangan Award from the City of Manila in 1998, RP Centennial Honors for the Arts in 1999, artist-in-residency at Ecole Cantonale d’Art du Valais, Switzerland in 1999 and awards from the American Society of Contemporary Artists in 2009.

The CCP exhibition is the first full-scale retrospective of Cajipe-Endaya’s significant contributions to Philippine art in diverse mediums enriched by artistic research and conversation across forms and materials. It also mirrors her manifold advocacies dwelling on historical truth, cultural milieu and social issues, especially on women. The latter has found resonance outside our archipelago, giving voice to the countless women in diaspora and thereby earning for the multifaceted artist “recognition in the Asia-Pacific for a singular Filipina visual language that is focused on the possibilities of feminist art.”

Following her graduation from the University of the Philippines’ College of Fine Arts in 1970, she ventured into printmaking while doing etching, collagraphy and silkscreen for 10 years. She started oil painting in 1981, producing pure ones or mixed with magazine collage, and embarked on acrylic in the 1990s.

The dearth of high-quality art materials taught her to improvise and use whatever materials she could gather from hardware stores or from her home. Thus, her grandmother’s shawl, her mother’s crochet, her aunt’s veil, her beaded slippers, her childhood clothes would make a mark in her artworks.

The indefatigable artist took up graduate studies in Art History and Criticism in 1976-1977, again in UP Diliman, thus starting her long and tedious archival research on Philippine historical images. “Mga Ninuno” (Forefathers), a series of prints done in 1976-1979, is now part of the CCP collection. She considers the series, which reflects her generation’s search for identity, her most significant work.

Slim and frail, Cajipe-Endaya has a quiet and self-effacing demeanor hiding the fire and intensity of a life-long love affair with the Muse.

Historian Fe B. Mangahas, who authored the four-volume “Kasaysayan ng Ating Bayan: Ang Pilipinas Noon at Ngayon” with visuals done by Cajipe-Endaya, is all praises for the artist. She says, “Meps is not only an artist but also a writer. Her works are not thunderous, but realistic; gentle but intense. As a woman, she’s not only feminist, but a ‘babaylan feminist.’”

Sculptor Julie Lluch is another great admirer of the artist’s work and considers her “among the best and finest in the land.” She says: “I love her collages and prints, the serigraphs and collagraphs, particularly the ones she did in a playful mood. Likewise, her large sweeping canvases of women in travail, behind floating windows and flowing curtains, overwhelm me. Behind Meps’ cool demeanor is a born fighter, a strong leader, a staunch nationalist.”

Cajipe-Endaya, 73, still has a lot of fire within her. She has not stopped asking questions, and wonders: “We have a whole mountain of challenges before us…How do we tell the truth through our art? The challenge is how to make people really think about their own transformation as empowered citizens. How to make ordinary citizens value social justice and the good life for everyone? How to restore the moral fiber of our people and our nation?”

Cajipe-Endaya’s retrospective is co-curated by Lara Acuin and Con Cabrera. CCP will be hosting monthly public programs this month, which will be held onsite and streamed online. An off-site exhibition,”Imelda Cajipe-Endaya: Windows to an Archive,” will also be presented at the Ateneo Library of Women’s Writings until Dec. 2 in partnership with the Ateneo Art Gallery.