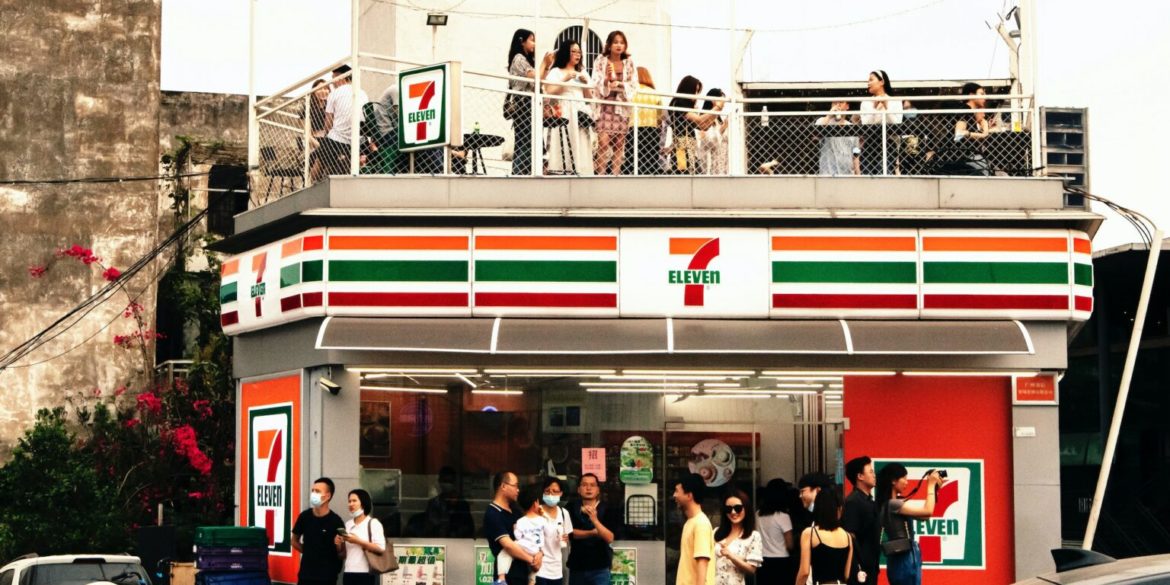 It is 1927 in Oak Cliff, Dallas. Jefferson Green, who ran the Southland Ice Dock, decides to add basic pantry items like milk, bread, and eggs to his store’s list of offerings. The Ice Dock, a place where people came to stock up on giant blocks of ice to refrigerate their food, was already operating 16 hours a day, seven days a week, so Green thought to maximize the influx of customers multiplied by the extended hours—something that the local grocery stores did not have.

Impressed by Green’s idea, one of the founding directors of the Southland Ice Company decides to merge operations, with stores in various locations open from 7 a.m. to 11 p.m. These would later be renamed as 7-Eleven. It would take another 36 years for the stores to operate under the now-ubiquitous 24-hour model, in the process expanding globally so that by the mid ‘70s there were about 5,000 7-Eleven outlets worldwide.

The then-uniquely American import would change not only global food retail industries and eating habits alike, the convenience store also inevitably took on the culture and details of daily life in its foreign counterpart locations. It was a new form of, frankly, mass capitalism, filtered through the lens of whichever country it was located.

When the first convenience stores (or konbini) in Japan were established in the mid ‘70s through a cooperation between the Southland Ice Company and the Japanese retailer Ito-Yokado Co., Ltd., innovation came in the form of ready-to-eat versions of traditional foods such as onigiri and oden.

The rise of the feminist movement in Japan, which at one point coincided with the arrival of convenience stores, contributed to another uniquely Japanese fixture in the konbini: Bento boxes and other nakashoku (takeaway meals) became a much welcome convenient dinner option for households that had both parents working and therefore had little-to-no time preparing home-cooked meals.

These packaged meals and a list of other food items, often mass market versions of traditional snacks, were delivered to the growing number of convenience stores in Japan using an advanced and extensive sales system. Meanwhile, the point of sales system, which was later introduced in the ‘80s, made inventory and delivery management a fascinating display of efficiency and synchronicity that soon became synonymous with the konbini—the place we are likely thinking of whenever we are thinking of how efficient or organized or even creative or eccentric the Japanese are.

The rise of the feminist movement in Japan contributed to another uniquely Japanese fixture in the konbini: Bento boxes and other nakashoku (takeaway meals) became a welcome convenient dinner option for households that had both parents working and therefore had little-to-no time preparing home-cooked meals.

For variety and novelty are key elements in the konbini as well, where infinite variations on a single KitKat bar meet machines that can print photos on specialty paper as well as book flights and dispense plane tickets. This harmony of product and service, this convenience by way of disregarding supposed incompatibilities and limitations, and engineered efficiency is explored as both setting and metaphor in the 2016 novel “Convenience Store Woman” by Sayaka Murata.

Providing a glimpse into the modern day konbini’s daily operations through the eyes of a convenience store employee named Keiko, the book shows the many ways mass capitalism is internalized and assimilated into daily life via places that are as seemingly harmless (and even necessary) as a convenience store. Literal to a fault, Keiko finds that working in a konbini is more tolerable than existing in the outside world, with the former’s defined rules and air of precision providing a comforting predictability. Here she is going through the motions of her job:

“As I arrange the display of newly delivered rice balls, my body picks up information from the multitude of sounds around the store. At this time of day, rice balls, sandwiches, and salads are what sell best… I continue laying out the pristine, machine-made food neatly on the shelves of the cold display: In the middle I place two rows of the new flavor, spicy cod roe with cream cheese, alongside two rows of the store’s bestselling flavor, tuna mayonnaise, and then I line the less popular dry bonito shavings in soy sauce flavor next to those. Speed is of the essence, and I barely use my head as the rules ingrained in me issue instructions directly to my body.”

The catch here is that while the passage is supposed to give off a sense of clinical detachment, what’s equally as palpable is Keiko’s confidence and even excitement over and because of the predictability of the task. Hers may be an extreme case and the novel could be read as deliberately trying to make a point about consumerism and labor and societal expectations specific to Japan, yet these are not unlikely to translate to these stores’ counterparts in other countries, where the konbini’s signature characteristics remain intact.

The Japanese import (for it has since become less of an American invention, despite its undeniably American roots) made its way to the Philippines in the mid ‘80s, when Philippine Seven Corp. (PSC) opened the first 7-Eleven branch at the corner of EDSA and Kamias Streets in Kamuning, Quezon City in February 1984.

Other well-known Japanese convenience stores such as Lawson, Family Mart, and Ministop (now called Uncle John’s) followed, each of them introducing unique selling points that could potentially up the kind of convenience that customers had grown accustomed to since 7-Eleven first came into the market. Ministop prided itself on being the first convenience store in the country with the first in-store cooking facility, while Family Mart stayed true to its roots and brought over its loaded lineup of fresh Japanese meals and snacks.

The convenience store has no doubt become a compelling force in the Philippine grocery retail market. Culturally, however, what remains quintessentially Filipino amid (welcome) imports like the convenience store can be found in the sari-sari store: the small portions, how it is often conveniently located near one’s house, and its ability to bring people together.

The success of this relatively young format isn’t surprising. Besides the rapid urbanization in the country, the same Nielsen report points out that consumer preferences are leaning toward the small store formats, which are usually conveniently located near homes or high traffic areas. This brings to mind the sari-sari store, which has since lost its spot as the most popular model of the small store format to convenience stores. The same Nielsen report says that the latter has contracted by one percent in 2017.

The convenience store has no doubt become a compelling force in the Philippine grocery retail market. Culturally, however, what remains quintessentially Filipino amid (welcome) imports like the convenience store can be found in the sari-sari store: the small portions, how it is often conveniently located near one’s house, and its ability to bring people together.