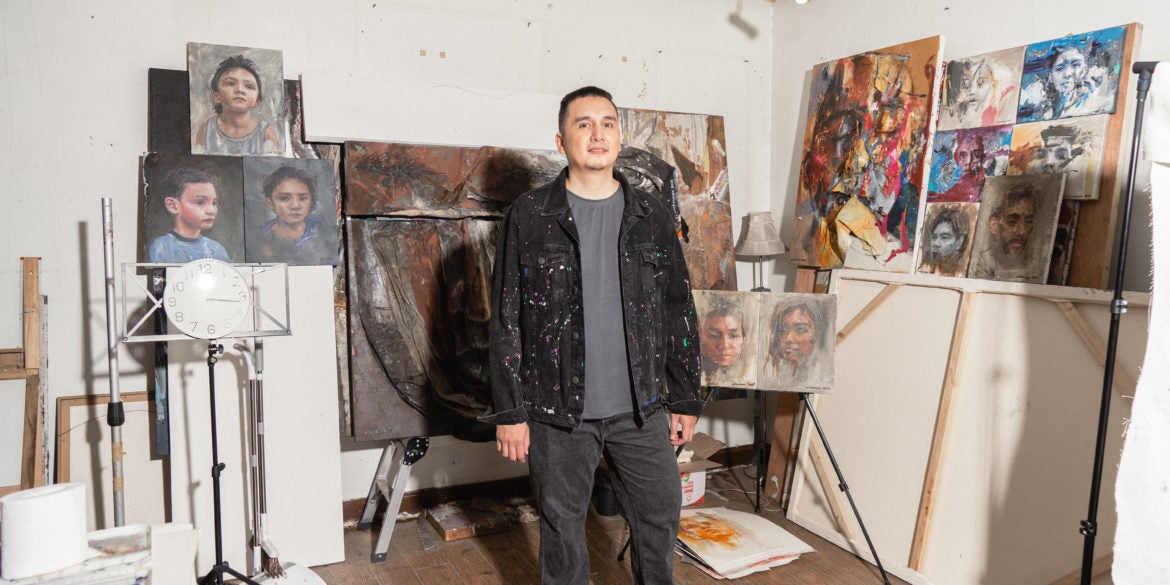 Martin Honasan is more than just an artist

A painter, a father, a friend, and a brother; art is only just a branch of Martin Honasan.

Throughout the years, we have been graced by the presence and memories of exceptional individuals who would be considered masters in their respective fields. Think Kobe Bryant, Heath Ledger, or Freddie Mercury. Outside of the circumstances surrounding their unfortunate and untimely passings, what connects these so-called legends is their obsession with their craft, and the standards they put upon themselves, separating them from their peers.

Bryant was infamous for overtraining, working out in the wee hours of the morning, starting before anyone got in the gym, and leaving after everyone had left. Ledger in preparation for his role as the Joker in Christopher Nolan’s ‘The Dark Knight’ reportedly shut himself in a hotel room with a diary as he experimented and meditated on the iconic comic book character. Mercury, a showman unlike anyone in history, performed and recorded songs as he was afflicted with AIDS which massively took a toll on his strength.

To an effect, in reverence and respect for what these beloved individuals have done, we have been conditioned into thinking that greatness can only be achieved through immense dedication and a little bit of insanity – after all, their impressive resumes speak for themselves – anyone who falls short of their example is deemed as undedicated or even lazy. 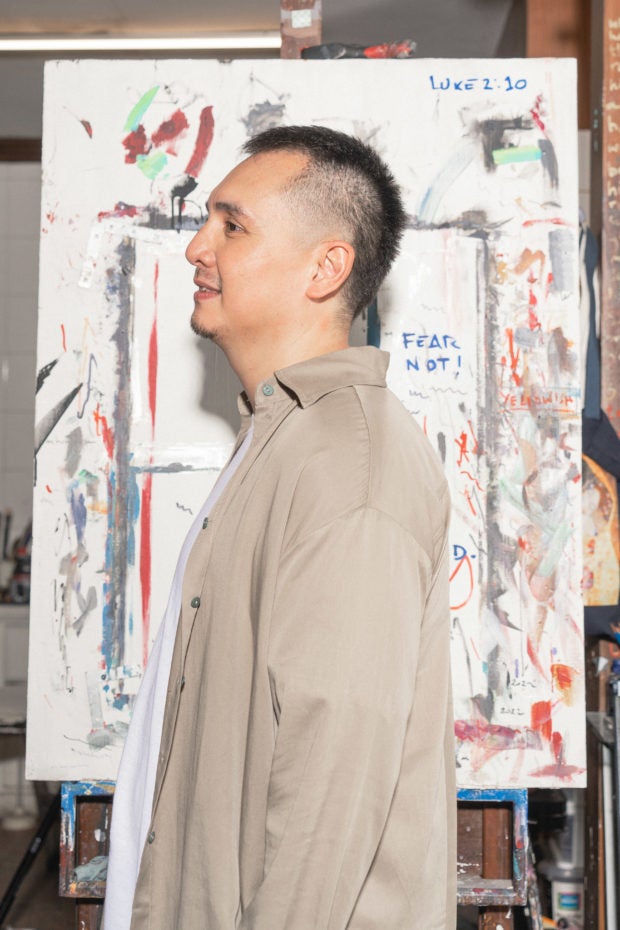 In an exclusive interview with LIFESTYLE.INQ, Martin Honasan shares that he aspires for something else entirely. An artist that has exhibited in various locations locally and internationally, no one can take away from his passion and skill for his craft. But for him, despite all of these, art is just that, art, not the full essence of his being.

“I think the legacy that I want to leave behind is that it wasn’t just about my work, that it wasn’t my priority. It’s weird, I’m talking about my art, but I want people to know that it’s just an expression, one branch of me.”

Calling himself a father, a husband, and a brother; he would rather be remembered for how he was in his relationships. Surrounded by people he loves and cares for, perhaps he has realized that they are the ones who he lives for, the ones that matter. He has made a healthy delineation, identifying that his work should supplement his life, not be the reason for it. While a simple deduction and a matter of fact for many, you’d be surprised by how many have lost themselves in their jobs and in the pursuit of the unattainable, all while casting their friends, family, and loved ones aside. Jokingly imagining how he would like to be spoken of, he says, “Hey, that guy was a good guy, he loved people.”

“I could easily decide to pour everything and become the next Ron Ventura, but if you do that you sacrifice so many things. How many decades are our lives? I don’t want to waste it on art. As fun as it is, it’s not the main thing.”

A graduate of the Ateneo de Manila University with a Bachelor of Arts degree in Interdisciplinary Studies (Psychology and Communication Arts clusters), Honasan initially thought of his art as merely a hobby, something he could never make a career of. He started out as a visual artist and art director in advertising from 1999 to 2001, then as a managing partner in his own design firm from 2001 to 2004 before choosing to pursue painting full-time after a period of pause and reflection.

Pointing to what influenced his inclination for painting, he claims he was always surrounded by art. His mom used to collect pieces and would always bring him with her as she visited exhibits or when she was looking to purchase any works. His father, politician and army officer Gringo Honasan also painted as a hobby, often dealing in landscapes and abstracts. He claims if he weren’t in that line of work, he would have pursued it.

From the moment you enter his studio at his home in Marikina, you will see splatters of paint on the walls and on the floor. Countless art materials are placed over his numerous tables, alongside massive easels carrying ongoing projects. Finished and abandoned works reside on the side, and various paintings, some from friends, are hung on the wall. If I had to, organized chaos would be how I’d describe the sight. But aside from these important items, figurines and comic books adorn his shelves. His eyes lighting up with enthusiasm as the topic shifts to those during our conversation, he shares that he was reading the Sandman comic book series and was excited to soon watch its Netflix adaptation. As it turns out, he grew up wanting to become an illustrator for the likes of Marvel, DC, or Vertigo. However, he became disheartened at the possibility upon discovering the likely workload of having to produce around 40 pages a month, an ungodly amount of art he thought he could never consistently churn out.

Turning to watercolor first, his initial art style as he described was very technical and aimed at photorealism. He recounted the task as very laborious, likening it to toiling under the sun as a worker. This would soon change after he met his now wife Barbie Almabis, which marked the change in his artistic process, and his decision to move to canvas. When she first moved in with him, he recalls a particular instance where he saw her by the stairs composing a jingle for a commercial. Starting out with random syllables while strumming her guitar, he was astounded at how fast she finished. Inspired by how organic it all seemed, a mere observation influenced how he’d view his own work moving forward.

Art as an end in itself

Nowadays, he describes his art as a process of gathering and rebuilding. Starting with bundles of retasos, he subjects these pieces of cloth to severe manhandling where anything goes, nature, paint, or even damage. At one point he left these outside his house during a storm. These fragments are then placed onto a canvas where Honasan, upon viewing the overall collage, examines if the picture reminds him of anyone he knows. He then refers to a collection of photos he has taken of friends over the years and paints their faces, building on the textures and patterns the collection of retasos has already made. It is a complete 180 from his previous process, this time allowing inspiration to take place on the go, without planning each step down to the finest of strokes. He does say however that he is most comfortable with painting friends rather than strangers, as he believes he can better capture the nuances of their features.

Funnily enough, he shares a story that happened during one of his shows in New York. A woman had approached him asking why he damages and slashes his wife’s face in one of his paintings. Scrambling to defend himself and dispel any assumptions of marital issues, he explains that the damage is the piece’s starting point, and the face is the last thing to be put on.

With such a specific way of going about things, one can’t help but wonder why? Is there any profound reason why he chooses to make portraits out of damaged scraps of cloth and paint? Again, we are spoiled into thinking any artistic work should have a deeper meaning behind it; the heartbreak behind the song, the ideology behind the text, the inspiration behind the piece. But perhaps this time around, the curtain is colored blue just simply because the author wanted it to be, nothing more, nothing less. For Martin Honasan, that is pretty much the case. He finds the sheer amount of layers and stories these depict aesthetically appealing. It bombards your eyes with so much data, he shares, explaining his fascination. This is not to say that his art is devoid of any meaning as according to him, his paintings reflect the human condition.

“It reminds you of our finitude, that we’re slowly deteriorating, decaying, we’re falling apart. We’re sand castles that want to be mounds of sand, we want to fall apart. But thank god that one day we will be rebuilt. That’s the hope, that’s what I’m trying to do, slowly rebuilding people, fighting against decay and death.”

But to be honest, that sounds more like an afterthought, something he discovered his works could represent, rather than pure intent from the very beginning.

He is an artist who loves painting in itself, who finds no need to throw his entire being at it, who sees art as an end on its own. However, at one point in his life, he did find difficulty in keeping it that way. An accepted truth, anyone pursuing a line of work in the arts has to expect financial uncertainty. Whether that be in painting, music, or even acting, not everyone can be the next big thing. For some, it may take years before they get their first big break, some as soon as they enter the scene, and some maybe never. Honasan was prepared for that reality, jokingly stating he can simply go hungry. However, as he got together with his wife, he began equating his craft with monetary value. Knocked by reality, he felt pressured to make things bigger, better, and more detailed; it screwed up his intentions for painting, almost returning to how he used to work with watercolor. After all, he had to provide for his family, who can blame him?

“Art is not about objects of high monetary exchange. It’s about reasserting our firsthand experience in present time.” – Antony Gormley

Grounding him is this quote from one of his favorite sculptors, reminding him to continue expressing his reactions to whatever he is experiencing at any given moment, and asking him to separate his process from economics and enjoy what he is doing.

Martin Honasan, against all odds, and against the demands of modern society, simply loves art. But no matter how much he does, he has remained firm that it will only stay as a branch of himself. He dreams of becoming remembered as a beloved individual who loved and cared for everyone he encountered throughout his life. While a modest dream for such a capable artist, he has found the reason for his being, one he will continue to live for.