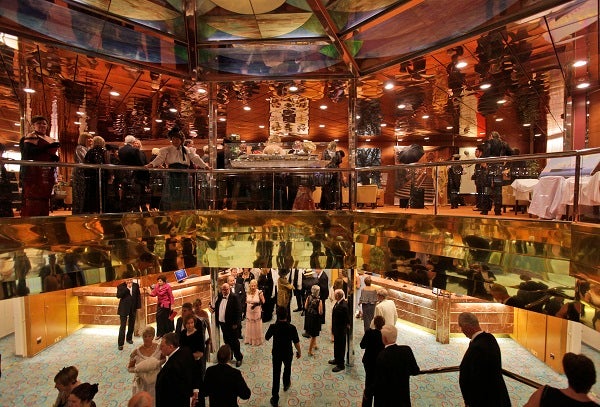 Passengers walk around the MS Balmoral Titanic memorial cruise ship, prior to the gala dinner in the Atlantic Ocean, Tuesday. Nearly 100 years after the Titanic went down, the cruise with the same number of passengers aboard is setting sail to retrace the ship's voyage, including a visit to the location where it sank. AP

LONDON—From Titanic’s birthplace in a Belfast shipyard to its resting place in the North Atlantic, thousands were gathering Saturday to remember the cruise ship that embarked on its maiden voyage as an icon of Edwardian luxury but became, in a few dark hours 100 years ago, an enduring emblem of tragedy.

Aboard the Balmoral, a cruise ship that is taking 1,309 history buffs and descendants of Titanic victims on the route of the doomed voyage, passengers and crew will hold two memorial services at the site of the disaster, 400 miles (640 kilometers) off the coast of Newfoundland — one marking the time when the ship hit the iceberg, the other the moment it sank below the waves.

A minister will lead prayers, floral wreaths will be thrown into the sea and a shipboard band, which has been entertaining guests in the evenings during the cruise, will play “Nearer My God To Thee,” the tune the Titanic’s band kept up as the vessel went down.

The Rev. Huw Mosford, who will lead the prayers, said he hoped the service would be uplifting.

“It will bring healing, it will bring some form of closure, perhaps — but I think it will also bring hope,” he told the BBC.

The cruise seeks to recreate the experience onboard the Titanic — minus the disaster. Many passengers have dressed in period costume for elaborate balls and a formal dinner recreating the last meal served aboard the ship.

Another cruise ship, Journey, left New York on Tuesday and will join Balmoral at the site.

In Belfast, Northern Ireland, where Titanic was built — pride of the Harland & Wolff shipyard — thousands will attend a choral requiem at the Anglican St. Anne’s Cathedral or a nationally televised concert at the city’s Waterfront Hall on Saturday.

The concert will feature performances by Bryan Ferry and soul singer Joss Stone, as well as 100 drummers beating out a new percussion work, “Titanic Drums.” Actors including Kenneth Branagh, Simon Callow and Imelda Stanton will read from contemporary accounts of the disaster.

At the cathedral, the performance of composer Philip Hammond’s “The Requiem for the Lost Souls of the Titanic” will be followed by a torch-lit procession to the Titanic Memorial in the grounds of Belfast city hall.

In the ship’s departure port of Southampton, England, an orchestra will play composer Gavin Bryars’ work “The Sinking of the Titanic.”

Other events are planned over the weekend from Houston, Texas to Halifax, Nova Scotia — where more than 100 victims of the tragedy are buried.

The centenary of the disaster has been marked with a global outpouring of commemoration and commerce. Events have ranged from the opening of a glossy new tourist attraction telling the ship’s story in Belfast to a 3-D rerelease of James Cameron’s 1997 romantic weepie “Titanic,” which awakened a new generation’s interest in the disaster.