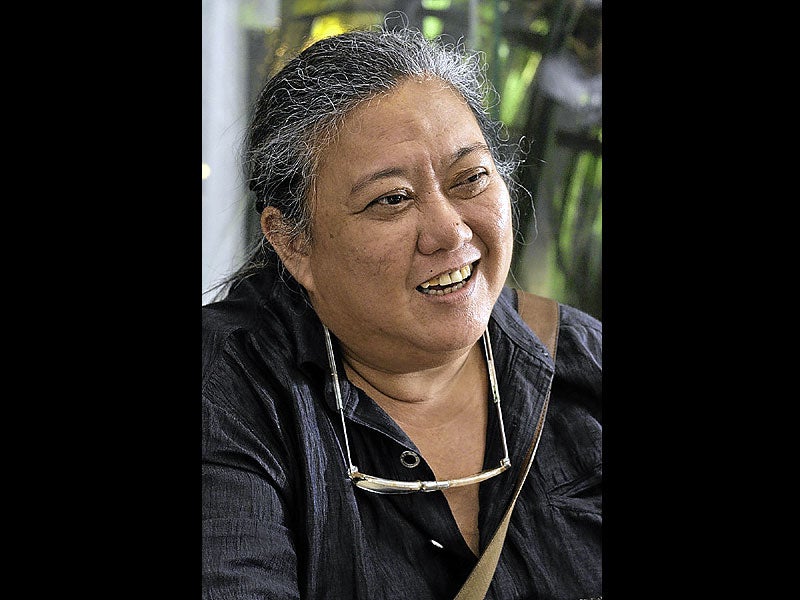 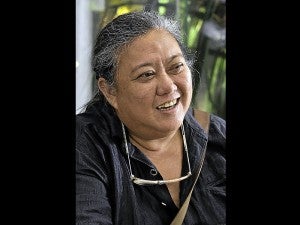 The opening salvo was a darkened dinner setting with beams of black light (actually ultraviolet rays), which played against the huge sprays of white phallaenopses and the parchment paper menus.

The first course was a sheer elderberry jelly, spiked with gin tonic and exuding a subtle, smokey taste.  Perched on a glass serving dish, the transparent jelly was like a spark in the dark. It was named Gist Glow, suggestive of the luminous and ethereal quality of the encantada or enchantress, protector of the forest.

Kathleen “Maymay” Liechtenstein,  culinary whiz and treasurer of Ballet Philippines’ (BP) board of trustees, is famous for her dramatic, thematic dinners. To herald BP’s 42nd season, she prepared a dinner for the press at her residence, which told the story of “Encantada” through her gourmet plating.

This season’s opener, “Encantada,” was premiered in 1991, with the wispy Cecile Sicangco-Ibarrola in the title role, followed by the dusky Judell de Guzman-Sicam. It’s   an apocalyptic story that begins with the Estranjero, the everyman, who can no longer tolerate the abuse of the friars. In rebellion, he steals their sacred Imahen.

Nature and its elements

A chase by the guardia civil ensues. Hurt, the Estranjero manages to flee to the mountains, where he meets the kababaihan, led by the Babaylan. The kababaihan also represent nature and its elements as well as the good. 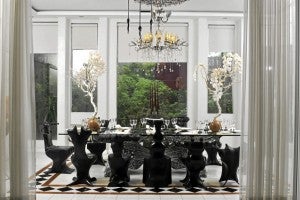 They discover that the Christian Imahen was actually their religious icon, stolen by the friars and dressed in fine clothes and jewelry. The Estranjero is healed in a ritual, but is subsequently caught by the guardia civil and beheaded.

His execution angers the kababaihan. They wage a war, despite  pleas from the Encantada.

Choreographer Agnes Locsin depicts the war scene as deforestation, and the consequent flooding and volcanic eruption.

Locsin credits librettist Al Santos for conceiving “Encantada. “He combined legends of the mountain goddesses, Filipino rituals, and history with a social commentary on the rape of nature. Coming from Philippine Educational Theater Association, he instilled an advocacy on the ecology.”

With her Graham technique and free movement, Locsin imbued her choreography with elements from the healing rituals of the Manobo, of the female shamans in Mount Bahanaw, the grounded movements of the Igorot, the gentle circling of the wrists of folk dances, and the masks in the Moriones festival. 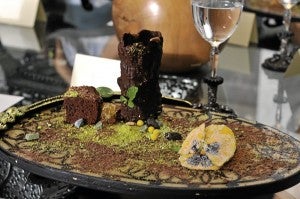 What about the flailing hair of  the amazon-like female corps?

As the main character and mood were established, Liechtenstein went on to present the second appetizer of   creamy chantilly  plopped with sea urchins and squid ink, caviar and lemon,  garlic-laced Roquefort  camembert,  and foie gras with apples, all wrapped in crispy cornets, hanging from sculpted metal trees.

The dish evoked the once-virgin forest at the start of the ballet. The colorful setting on Taj Mahal mother-of-pearl plates and the whimsical sculptures to hold the cornets by artist Gabriel Barredo implied that it was indeed a musical—more like folk pop-rock by Joey Ayala and the Bagong Lumad.

In the soup course, Liechtenstein said the colors were based on the costumes of the female corps, with greenery bordering the staircase where the Encantada descends. It was a roasted sugar beet soup topped with a pear soaked in blue Curaçao. The blue-green shade of the pear also represented the Kalikasan ensemble. 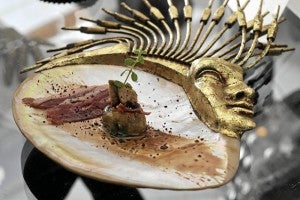 According to the choreographer, costumes of the kababaihan were softer and paler than the shade of the soup.  Still, the soup had that otherworldly taste.

For the salad course, Liechtenstein had skeletal trees on slate plates custom-made. Fresh manzanitas (mutingias) from Cavite dangled from the wire-framed trees. The black slate plate served as  backdrop for the garden of mushrooms on Jello squares, stuffed flowers, gjetost cheese, and mushroom paté and lemon curd sandwiched between arugula leaves.

Locsin annotated that the Salad Mage symbolized deforestation. It represented the scene where kababaihan and the Babaylan fought for their religious icon.  It was set in the ravaged forest. 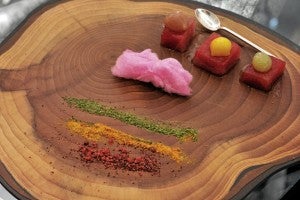 Angered by the Estranjero’s prosecution, the kababaihan put on their war paint to fight the guardia civil. The sorbet of santol and mango pulps on frozen watermelon and pulverized lime, orange, and strawberry strewn on a plate that resembled a tree stump captured that mood. The colors and patterns suggested the makeup on the antagonists’ faces.

“I just wanted the colors to go with the magic,” said Liechtenstein. “It’s a play of bitter and sweet. You let the taste of the powdered sherbet burst in your tongue.”

As the events led to a full-blown war, the Encantada suddenly appeared to wail. Her tears fuelled the forest fires that depicted the kaingin system.

Hence, the entrée was a sole dish, wrapped with prosciutto and stuffed with sun-dried tomatoes, champagne jam from London, and caramelized onions. Liechtenstein was armed with herbes de Provence from Cannes. Wavy patterns of puffed rice infused with saffron, rose, green tea, and seaweeds salsa suggestive of the tsunami adorned the plate, which was served atop a mini aquarium.

Other guests preferred angus, vacuum-cooked for 24 hours, rubbed with wild herbs and accompanied by rolls of colorful grilled rice. “This was a real treat for me,” said Locsin, who was watching her blood pressure. 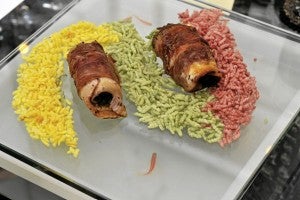 The dessert depicted the epilogue in the forest, where tree trunks lay barren and nature was a mess.  The tree trunks were made of Valrhona chocolate stuffed with a custard of coffee-flavored banana. The plate was laden with liquefied pistachio streusels, pecan praline, a frosted pansy, quinoa puffs, and brittle honeycomb or cinder toffee called hokey-pokey.  The crisp and tangible textures were more memorable than the taste.

Finally, the mantle of sludgy grounds at the bottom of the Turkish coffee symbolized the lava after the volcanic eruption in the ballet’s climax.

Was Liechtenstein accurate in her Epicurean interpretation of the choreography?

“Deliciously so,” said Locsin, “from appetizer to coffee.”

We all wished our hostess had created an encore piece.

“Encantada” premieres on August 15 at the Cultural Center of the Philippines.