Year of the Water Rabbit could be time of peace, harmony, says ‘Queen of Feng Shui’ | Lifestyle.INQ ❮ ❯ 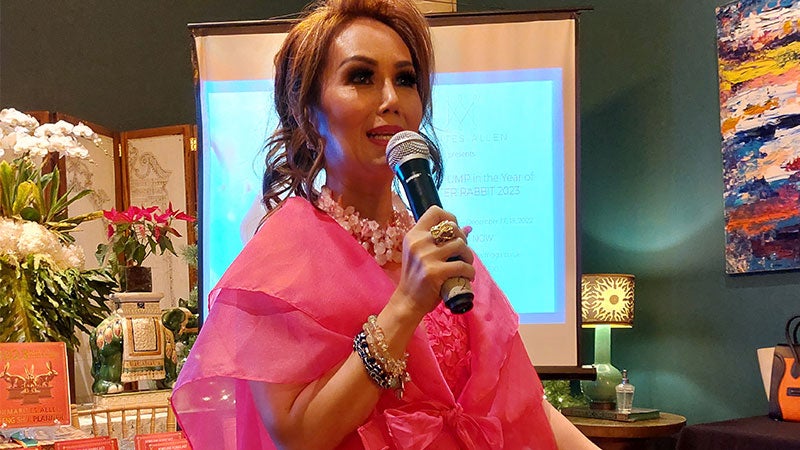 Year of the Water Rabbit could be time of peace, harmony, says ‘Queen of Feng Shui’

MANILA, Philippines—Under Chinese astrology, 2023 will be the “Year of the Water Rabbit,” and could take the animal sign’s calm nature, said “Queen of Feng Shui” Marites Allen.

“Thankfully, rabbit naman is known to be meek or mild, and love, peace and harmony. And the center sector of 2023 has the romance in the middle,” Allen said in an intimate gathering with select members of the media at Manila House in Bonifacio Global City in Taguig City last Nov. 28.

“I hope this is the year that the people who have separated can reconcile. Also having delayed your wedding because of the pandemic, it will be the time for you to do it,” she added.

However, Allen warned that it will not be all calm and cool next year. She said the world is at the tail end of the “Period of 8” and there will be a shift to the “Period of 9” which may indicate a power shift to women, among other changes.

It is also a “conflict year” for President Marcos Jr., who was born in 1957, a “Year of the Fire Rooster.” Not only is the fire element clashing with the water of 2023, rooster is also in conflict with the rabbit. Allen advises him to be extra careful. She also hopes the country’s economic team will be able to “contain all the difficulties that will come” to the Philippines.

She, however, sees Southeast Asian nations faring better than European countries, which “are closer to the war,” referring to Russia’s invasion of Ukraine.

She will have a more exhaustive and detailed discussion for each animal sign at the 2023 Feng Shui Convention, which will be conducted again online. It is scheduled on Dec. 17 and 18, and patrons will be given the option to sit through the entire program or choose which animal signs are relevant to them.

But if in 2020 and 2021 Allen conducted it from London, England, she is staying in the Philippines for the virtual conference. “It’s so cold in London, and I’ve been doing it there for two years. I think at the same time, the merriments and energy of the Philippines during Christmas is different. And family is important, I haven’t seen my family for two and a half years,” she shared.

You may visit Allen’s official Facebook page for details on how to register to her 2023 Feng Shui Convention.  /ra