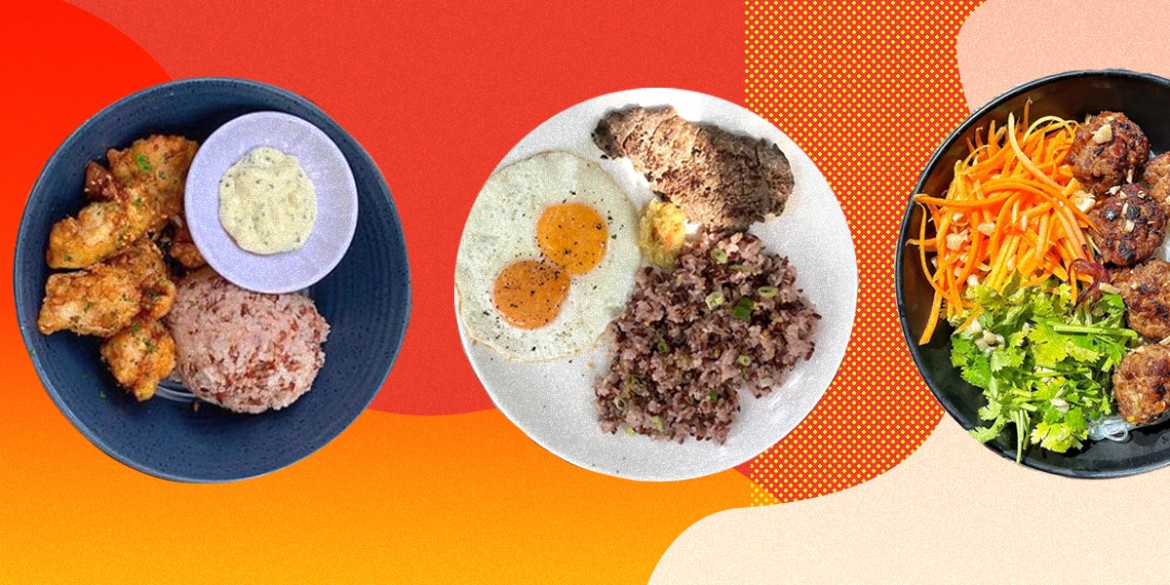 Unless you’re gearing up for sleeping in with a staycation or lounging by the beach for that perfect tan, a visit to the sandy shores of La Union can hardly be considered as purely relaxing. Whether you’re planning to learn how to surf or go for a swim, getting continuously battered by the beach’s beautiful yet powerful waves will surely sap you of all your strength.

Don’t get me wrong—as a first-timer in La Union, it was a fun experience, but it sure as hell was tiring. But all the eating out and exploring the long stretch of beachfront food spots that the town had to offer definitely made up for it and saved the overall experience for me. A good hearty meal goes a long way—and it was all of these stops that kept me energized and raring to go on the next adventure. Here are five eateries that caught my eye—and my tastebuds—that I’m sure will satisfy your post-beach hunger, too.

This French-inspired cafe may not be as easily accessible on foot as compared to other spots in the province’s “Surfing Capital”, but Juju’s Crêpes N’ Brew is a hidden oasis of endearing cats and dogs, and heartwarming home-made crêpes worth going to. Only a short trip to barangay Baroro, to San Juan’s neighboring municipality of Bacnotan, you will be welcomed by a lovely yet unassuming structure that looks more like a house than a business establishment—from only here I’m sure you can tell that their food is homemade, they’re really driving the point. Tables are scattered in their backyard, porch, and inside, making for a peaceful dining experience away from the noise of the city—it also helps that the cafe’s resident cats and dogs, two of which I had already met, Eden and Stewie, would occasionally keep you company.

Chef and owner Juju who once managed a cafe in Makati called ‘Le Cafe Curieux’ prides herself in the uniqueness of her crêpes. Aside from the TLC (tender loving care) scattered throughout each and every one of her dishes by virtue of it being homemade, she utilizes a special mix of malunggay/moringa and soymilk for the batter of their crêpes. Whereas traditional makers would use buckwheat or regular flour, she has decided to go with this cheaper and healthier alternative. Moreover, while crêpes are known for being relatively thin, Juju has decided against this norm, opting to characterize her own version of the French staple as having a thicker batter and plentiful fillings, both sweet and savory. While this, she believes would have her criticized by crêpe purists who believe in the traditional way of making these, she wants her crêpes to be quick and fulfilling bites for anyone they will be serving.

Everything she mentioned during our short conversation translated beautifully onto the plate. Hearts warmed, and bellies filled, I together with my companions was stuffed to the brim, unable to move but satisfied nonetheless. Personally, my favorites were their; Breakfast Overload, BLT, All Meaty Crêpe, and Lemon Butter Sugar Crêpe. But you should also try Juju’s personal favorite and cafe best-seller, their Creamy Chicken Mushroom Crêpe.

Beachfront dining at its finest, no one does it quite like Clean Beach. Located along the shores of La Union, they showcase a seamless cohabitation of structure and nature as shown by their space, and the very sand just in their backyard. With open corridors and the lack of a fully enclosed space, the cafe invites the cool breeze to accompany you during your meals. Their interiors provide an avenue for comfort—mismatched furniture and an organic layout allow you to feel at ease, as if you were at home, instead of a commercial establishment. With an emphasis on the harmony between nature and the people living in it, Clean Beach also embodies this idea through its daily operations. The cafe is solar-powered and pet friendly, plus, they also engage in beach cleanups, befitting of their own name.

As for the food, there’s plenty to choose from on their international menu that’s sure to have something for everyone. Personally, however, their Kaya Toast, Chicken Chops, and Bagnet-sea-log are definitely must-tries.

This is not your typical small roadside carinderia. Alongside Urbiztondo Road lies Tagpuan sa San Juan La Union, a humble eatery with limited seating capacity that showcases a menu offering a variety of Filipino food. Simplicity mastered to a tee, and food befitting for an empty stomach, you won’t go wrong with their; Elyu Bagnet, Surftown Pares, Chix Adobo, Tofu Sisig Rice, or their Mami.

I love chicken with every fiber of my being. Fried, baked, in a stew; no matter what spin a certain cuisine would put on it, you name, I would probably love it. But admittedly with so many variations already made, it’s hard to make something out of it that is unique and has never been done before. Maybe for some, dishes surrounding chicken have gotten old—it’s the same thing time and time again. Located deep inside the food-park-esque The Great Northwest, Sabong Fried Chicken, however, has seemingly found the needle in the haystack, the hidden recipe of a saturated staple.

The centerpiece of their menu, and my personal favorite, their Honey Bagoong Chicken is their in-house Sabong fried chicken that is dressed up in a honey bagoong glaze and is served alongside a kare-kare dipping sauce, smoked eggplant salsa, and chicken rice. A Filipinized Bonchon and deconstructed Kare-Kare all in one dish, their best-seller carries with it an explosion of flavors I didn’t expect I would find in a fried chicken meal—plus they give you three sizeable pieces of chicken, I’ve never been given that much in any restaurant before. Aside from this, however, you can also try their; Korean Soy, Szechuan Style, and Elyu Original flavors.

Neighboring Sabong Fried Chicken at The Great Northwest, ScallywagR&D Club embodies what a hearty meal should be; rich, warm, and fulfilling. Their rather unique menu spanning various cuisines is filled with dishes that just hit the right spot, filling your belly and keeping you energized and ready for the next adventure—or maybe not if you end up too full to move like me. Should you come across this food spot, I would recommend their; Bangkok Style Pork Belly, Spicy Soy Braised Tofu, and their Chorizo Pudpud Negrense Style.

ScallywagR&D Club is located at The Great Northwest, La Union