A hot take on nepo babies: They have it harder than we think | Lifestyle.INQ ❮ ❯ 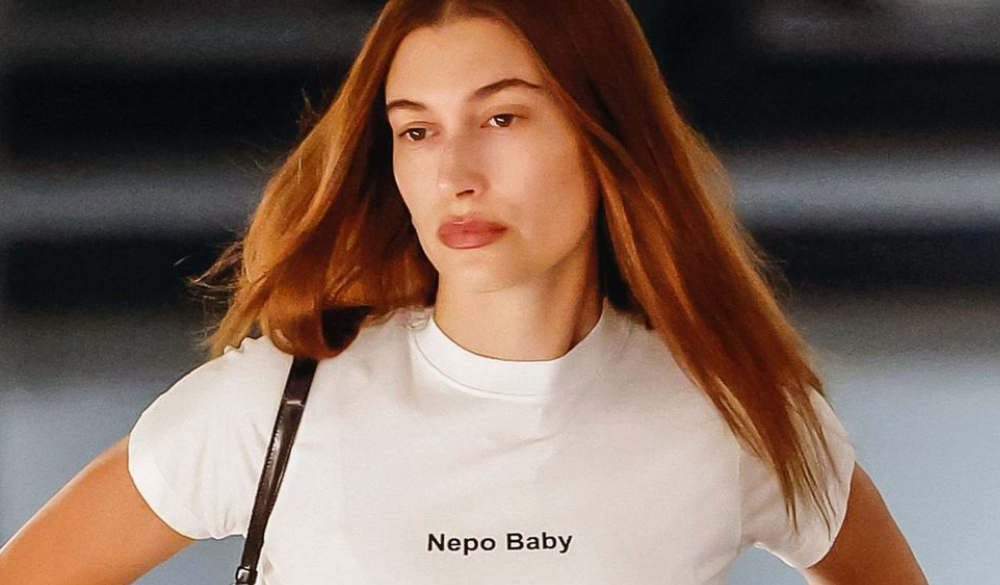 Header image: It’s the “Year of the Nepo Babies” and Hailey Bieber specifically wore this shirt (important note: in a parking lot where the paparazzi just coincidentally happened to be in) to show she’s not ashamed of her roots and her blood. Image Source: Getty Images (HarpersBazaar.com)

Let me guess. You probably read the title and frustratedly clicked on it with an agenda to give me a piece of your mind. Don’t worry, your feelings are completely valid but allow me to take you to the flipside.

‘Nepo baby’ is a Gen-Z-born term that you probably won’t find in Merriam Webster’s, but instead, in Urban Dictionary. It’s derived from the entertainment industry’s buzzword, ‘nepotism’. Simply put, nepotism refers to when people, usually the relative or friend of someone in power, get a very coveted opportunity because of blood ties, friendship, or connections without having to work (hard) for it at all. Nepo babies are what the internet now calls the genre of Hollywood celebrities who have famous parents who (most likely) highly influenced where they are on the social scale today.

There’s a reason why nepo babies are a touchy subject for a lot and a valid frustration for the general population. But what people don’t talk enough about is that nepotism happens everywhere else, from tech companies to universities to politics. Like in 2019, it was reported that 47% of accepted white applicants in Harvard were legacy picks, that’s almost half of its population. While the Philippines is a notorious country for putting relatives in government posts. This also happens in some companies, where generational heirs are consecutively lined up for the throne like in Samsung; which almost never outsources and/or uses meritocratic decisions.

But the focus on nepotism is highly publicized and debated about specifically in the entertainment industry. It has turned into a widely conversational phenomenon, and for obvious reasons too. It’s a package deal that consists of fame, power, money, glory, and exclusivity, where you’ll always be the first in line when opportunities arise. And this is exactly why the general public gets frustrated about it, but I believe they don’t get riled up for no reason. It’s an acknowledged fact that it’s not the nepo babies’ fault that they are who they are. They’re born into the spotlight whether they want to or not, but it’s their acknowledgment of that fact that people hinge their reactions on. Some nepo babies are extremely adamant in devaluing their last names and family trees, insisting that they’re “self-made” and that they worked just as hard as everyone else. These are the types that don’t necessarily fall on people’s nice lists. There’s no doubt about the advantages of nepotism in the entertainment industry. Being born under the public eye and having celebrity parents makes navigating the industry easier, having opportunities served on a silver platter, and a last name that gets you to places and beyond.

But, there are always two sides to every coin. This is the one that doesn’t really see the light of day.

First, there’s a constant pressure of living up to your family’s name, and this can be a toxic game to play. It puts a hyper fixation on everything you do, but especially your “acquired” talent and skill that’s always being put under the microscope. This causes perpetual expectations and a never-ending flow of comparison with either your parents, ‘self-made’ celebrities, or even fellow nepo babies. It also breeds a type of psychological turmoil– that’s unexplored because most believe it’s just another word for being privileged or having ‘rich people problems– where you bear guilt when you don’t live up to your parents’ name, as if it was your intention to ruin a legacy. You also have internal battles where the chance for genuine fulfillment is seized because you would wonder if you’d be where you are now if you didn’t come from powerful lineages. There are also possibilities where the baggage from celebrity parents (E.g. being canceled or hated on) can be passed on to you as if it’s a new type of generational disease; born with tainted blood. And yes, you’re also thrown career opportunities by the hundreds, but it’s at the moment you just start walking and now, you already have a mounting pressure on your back trying to carry what your last name entails, all at age 6. Then, you’re thrust into the spotlight (which basically means into the wolves) at such a young age, and there are almost zero chances of having a ‘normal’ childhood, growing up under constant scrutiny with no legroom for mistakes. Last but not the least, it means entering the world as if you’re a lion in a petting zoo– all eyes are on you, and people lust for the drama that they’ve already conceived in their heads way before you can even speak for yourself; as if praying for your downfall before you can say “please”. So really what I’m trying to say is: don’t judge a book by its cover. Or more accurately– let’s not be quick to judge a kid by their dad’s Oscar nominations and their mom’s Vogue covers.