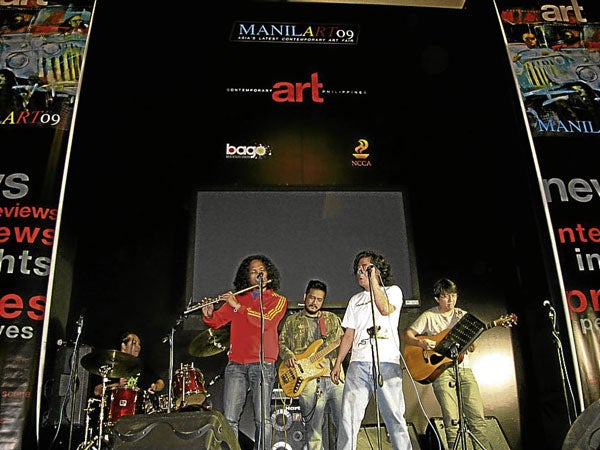 ManilArt 2011, the 3rd Philippine International Art Fair is on! On Aug. 24-27, the country’s biggest gathering of galleries promises a more diverse and vibrant art exposition at the NBC Tent in Bonifacio Global City, Taguig.

“Viewers shall witness a groundbreaking launch—the simultaneous opening of various art exhibitions during gala night,” said Delan Lopez Robillos, ManilArt 2011 director. “Exhibitors will not simply be showcasing the works of artists they represent but each gallery shall be presenting a conceptualized art exhibit,” he added.

The maiden run of ManilArt in 2009 had a painting of a jeepney by Onib Olmedo as its banner piece, while 2010 bared Andres Barrioquinto’s “Crystal Gazer.” This year, ManilArt is privileged to have the artistry of highly sought painter Elmer Borlongan with his obra “Batang Edsa.”

ManilArt 2011 seeks to merge the visual arts with other disciplines. Programs will include a modern-dance interpretation of Borlongan’s art by premier contemporary-dance maven and Dance Forum founder, Myra Beltran during the gala.

Among Beltran’s professional affiliations are Ballet of Oldenburg in Germany; Ballet of Prishtina in Yugoslavia; and Ballet Philippines. 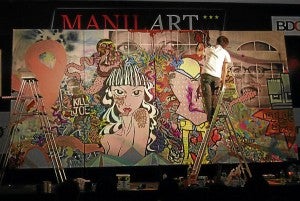 Hosted by RJ Ledesma, the Filipiniana gala night will be complemented by a fusion of indigenous and modern music by Banda Malaya. Guests shall be serenaded by the award-winning Fatima University Chorale.

In recognition of the many art greats who have come out of the hallowed halls of the University of Santo Tomas, ManilArt 2011 through the Varsitarian, the university’s official student publication, has invited UST to celebrate its Quadricentennial milestone during the art fair.
A host of activities featuring Thomasian performances is tentatively slated for Aug. 27. Highlighting the event is a ceremony honoring outstanding Thomasian visual artists.

Continuing its intent to further inform art enthusiasts, the ManilArt lecture series this year includes, among others: “Semiotics in Visual Art” by Oscar V. Campomanes; and “How We Turn Paintings into Bicycles: Lessons in Art, Law, and the Internet,” by Gigo Alampay. 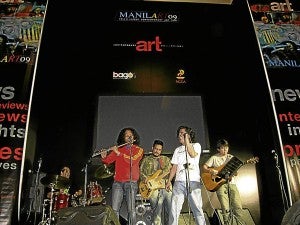 Campomanes teaches Critical Theory and Cultural Studies at Ateneo de Manila University; and Semiotics, Media Criticism, and Culture Theory at the UST Graduate School. He is a permanent panelist at the annual Jerry Elizalde Navarro Workshop on Arts Criticism in Baguio City.

Alampay teaches Contemporary Legal and Policy Issues in Information and Communications Technology at the University of the Philippines College of Law. He is the executive director of Canvas, a nonstock, nonprofit organization that promotes Philippine art, culture and the environment.

Merging the literary and the visual arts, ManilArt 2011 also has a treat for little art fans. Children will enjoy the storybook reading hour at the lecture room.

“The Rocking Horse,” which features paintings by Elmer Borlongan will be told aloud by Carisse Escueta, a former preschool teacher who is now executive director of RepubLikha. Radio and TV personalities, Gang Badoy of Rock Ed Philippines and Ramon Bautista, have also been invited to read. Artists in Residence, Inc. (AIR) will give a lecture on basic drawing.

Among the art fair’s goals, in conjunction with promoting Philippine art, are to compound visitorship and strengthen support from both local and foreign exhibitors.

This year, ManilArt 2011 also aims to fortify media relations to expand media coverage that is both more extensive and intensive.

ManilArt 2011 is presented by the Bonafide Art Galleries Organization (Bago) and the National Commission on Culture and the Arts (NCCA). For details, call 5316231 or 0917-8511333, or e-mail [email protected] Visit www.manilart.com.