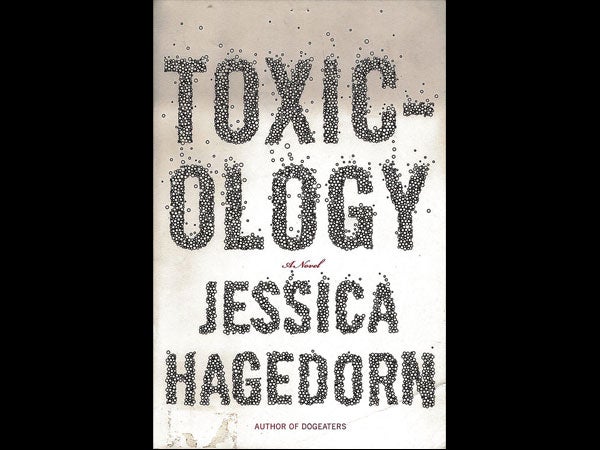 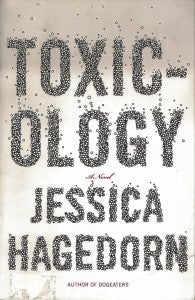 Some writers impose a purposeful discipline on their books from the very first chapter. Their plots unfold logically and steadily, one after another, like clockwork. Jessica Hagedorn is not one of those writers.

Instead, Hagedorn, who was born and raised in the Philippines, writes her novels as if the events are flowing together—and there’s really no way to tell what’s going to happen next. She writes almost on the edge of recklessness, but her sentences are so poetic they almost transcend prose.

That brand of writing, as well as her distinctive absence of quotation marks, is on display in her fourth delightful, desolate novel, “Toxicology” (Viking, New York, 2011, 225 pages).

Narrative devices appear and disappear while readers’ heads will be at risk from whiplash, as Hagedorn fearlessly shifts from one narrator to another, sometimes in the same chapter.

Addiction is the common denominator among the wretched characters who people “Toxicology’s” mean streets of New York. They are artists and victims, creators and the lost. “Toxicology” is triggered when Romeo Byron (clearly an analogue for the late Heath Ledger) dies from an overdose, and the buzz centered on his upcoming film, in which he played a villain.

“There was much advance buzz, audacious sneak peeks on YouTube. Mimi knew that the movie was going to be horrible and crass and brilliant. And now that he was dead, she, along with Violet and thousands of other people, could not wait to see it.”

That is an apt description of “Toxicology’s” two main characters.

Mimi Smith is a struggling filmmaker who is desperately seeking funds to make her second movie. Her first had been a lauded low-budget indie film called “Blood Wedding.” Now, bereft of funds, with a missing boyfriend, and a defiant daughter named Violet, Mimi lurches through “Toxicology” as she searches for both redemption and cocaine.

She is described thus: “Mimi’s an orphan. From some faraway kingdom where everyone can sing and genius lies in mimicry.” And yes, there is always some dark fragment of the Philippines smuggled into Hagedorn’s novels.

Meanwhile, Eleanor Delacroix is an esteemed elderly writer who hasn’t written a book in 19 years and is still mourning the death of painter and long-time lover Yvonne. She is stunned by her own frailty, and “Toxicology” takes off when the small but revered literary magazine called the Volga Review asks Eleanor to do a reading.

While she ultimately says yes, Eleanor then plunges into a chasm of doubt and memory through more substance abuse, making attending the reading anything but a sure thing. This is the event that pulls the rest of “Toxicology” to it like a black hole pulling all the universe’s matter to itself.

This certainly isn’t for everyone. As a novel, “Toxicology” is all sharp edges and extended elbows. It’s an unconventional book that seeks to blindside you with the violence of its characters’ needs and the weight of all they have lost.

It reminds one of Darren Aronofsky’s film “Requiem for a Dream,” but where Aronofsky’s characters are shown in the process of devolving because of their drug use, “Toxicology” shows characters who have been immersed in their addiction for too long.

Hagedorn keeps you guessing with a continually changing format for her narration, the story changing shape to match whatever fearful goal Hagedorn has set for that particular chapter.

Dealing with a dying animal nearby, Mimi comes face-to-face with the grotesquerie of her life and that of everyone else trapped in “Toxicology”: “Something had happened when it was very young, for the beast reacted violently to being confined. It did not move, but its eyes were alert. Or so Mimi thought. I can’t help you, Mimi said. But you’re welcome to die here.”