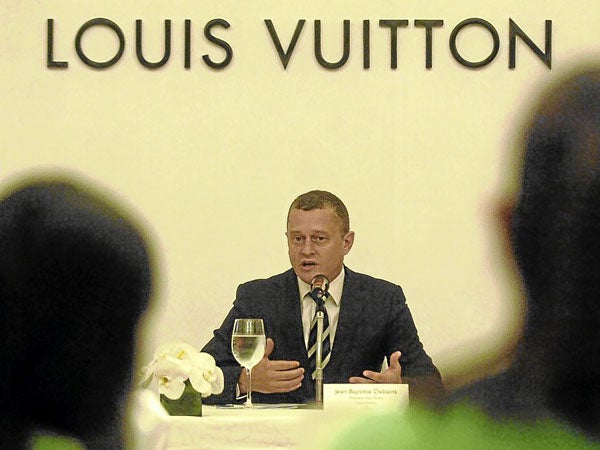 A first–Vuitton works with PH group for needy kids 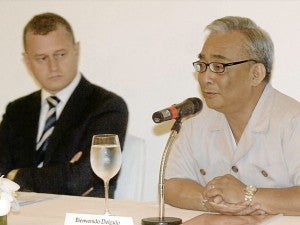 But this seeming disconnect didn’t stop Paris-based LV from forging a five-year partnership in 2010 with the Imst, Austria-based SOS.

Dubbed as “Partnership for Children’s Futures,” LV, through its intellectual property department, is donating $500,000 to SOS over the said period, to be divided among the NGO’s key education and intervention programs in four developing countries: China, Vietnam, the Dominican Republic and the Philippines.

It marks the first time LV is donating to charity in the Philippines in a major way. The company is also expanding its Philippine store at Greenbelt 4, Makati.

Led by Bienvenido Delgado, SOS’s national director in the Philippines, the NGO runs children’s villages in Davao, Lipa and Tacloban. Through Jean Baptiste Debains, president of LV in Asia-Pacific, the company has allotted $120,000 to SOS Philippines to be used over a two-year period.

The HK-based Debains recently flew to Manila to announce the development. Joining him in a media conference at Makati Shangri-La were Delgado and Rhea De Vera-Aguirre, LV’s country manager in the Philippines.

Since the partnership’s thrust in the Philippines is on “family-strengthening programs,” the amount won’t go directly to SOS’s villages in the three Philippine cities. Each village is dedicated to raising and educating orphaned and abandoned children.

Instead, the amount aims to support families at risk of abandoning their children or making them work due to extreme poverty. The ongoing program, which targets kids from needy families within a five- to seven-km radius from the three SOS-run villages, places strong emphasis on preventing kids from being forced into child labor.

“There are already ongoing programs in Lipa and Tacloban, where we will start to earmark some of the funds,” said Delgado.

“It’s quantifiable in the sense that you will be able to see healthy kids going regularly to school for the next two years. This is where the series of programs starts. It’s a cooperation to get them healthy and in school,” said Delgado.

“The program’s thrust of supporting children living outside the three SOS villages involves helping provide for their food, clothes and books,” Debains added. “By supporting their families, we are encouraging them to stay with their families, because we believe that no one or nothing can take the place of an ideal family in bringing up a child.” 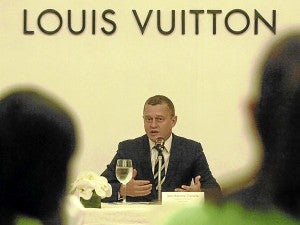 with counterfeiters the world over. But to Debains, the partnership as well as the source of funds sustaining it is a “perfect fit.”

Rather than reinvest the entire amount it wins in damages, LV’s central office has chosen to give away a considerable portion to charity. The amount LV generates, Debains said, is way below the untold sums it spends annually running after counterfeiters.

The choice of a partner, he said, is based more on trust and not the result of endless studies to determine ideal beneficiaries. If that were the case, LV would be bogged down and end up doing nothing.

“Since the money came from our fight against counterfeits, it was particularly relevant for us to support children’s education,” he said. “Again, it’s a way to keep kids away from child labor, which is one of the ill effects of counterfeit activities.”

But whether or not child labor is connected to the proliferation of fake LV Speedies and Neverfulls, people at LV have taken it upon themselves to focus on underprivileged children as part of the company’s thrust.

“There are other forms of child labor, but in a considerable number of cases counterfeiting is involved,” said Debains, himself a father of two young children. “By supporting children’s education, we not only help children to develop a life of their own away from counterfeits, but beyond that, to help them build a life for themselves.”

Delgado, who assumed the post in 1999 after a life-long career as a banker, has witnessed countless success stories of SOS’s former children-beneficiaries. Assistance in some cases extends up to college and even six months after graduation to help the fledgling graduate find a decent job.

“A number have since left to work for our Norwegian partners in Norway’s shipping industry,” he said. “They finished their maritime studies and have landed jobs in Norwegian ships. Our SOS Children’s Village director in Davao used to be a child under our care.”

The lucrative world of luxury fashion, wherein LV is a major player, may seem lightweight, but the underworld of counterfeiting, which it has spawned, is certainly not. It’s a cause for concern not only to LV, but also to its competitors, governments and those in allied industries.

Through its cooperation with local police, LV has joined in regular raids in Greenhills in San Juan City and other counterfeit hotbeds in the Philippines.

“But it goes beyond Louis Vuitton and other luxury brands,” said Debains. “You have counterfeit medicines, car parts. Often these are linked to a kind of parallel economy that involves lots of money and various forms of criminal activities.”

It’s a serious and continuous problem, he conceded, that requires vigilance and the concerted efforts between affected companies, the authorities and the public.

“As soon as they go outside the legal framework, not only do people involved in these illegal activities avoid paying taxes, they can also freely use substandard materials that can be hazardous to both their workers’ and the general public’s health,” said Debains. “That’s why Louis Vuitton has taken it upon itself to contribute to help solve the problem by running after them and directly helping disadvantaged children. We will not solve the entire problem, but it’s a start. All of us can make small differences.”