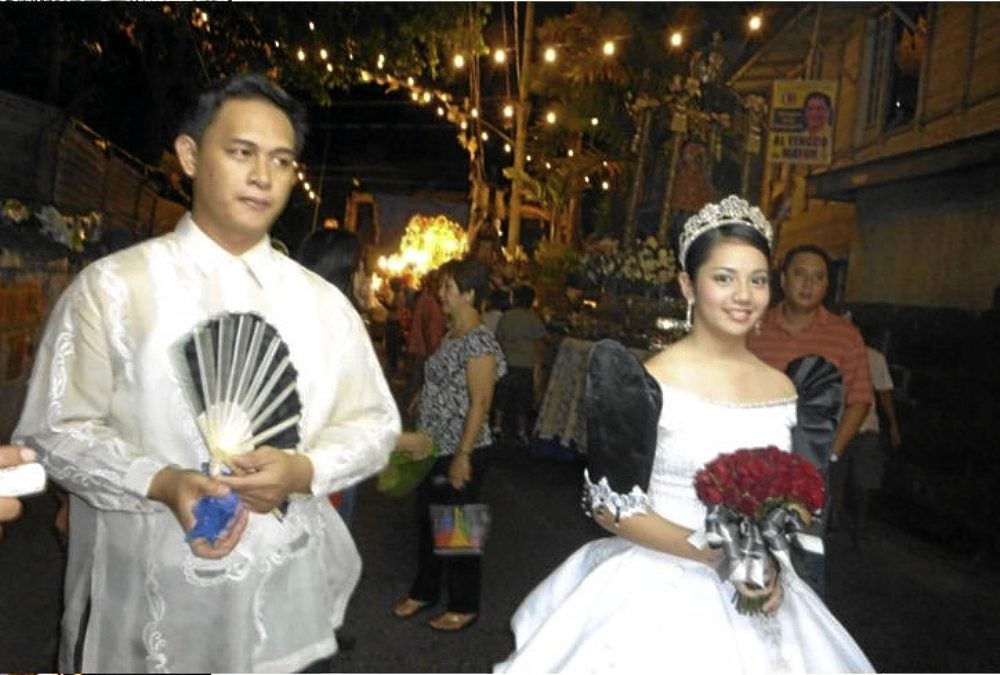 IN ALL barrios, the sagalahan is the best time to showcase the latest styles and variations of the Filipina terno.

A prewar print of the Blessed Virgin in full regalia wearing her gold crown and in ceremonial robes, flanked by double columns with elaborately embroidered drapery and a cartouche of Philippine flora like the rosal, dahlia, gumamela and sampaguita framing her venerable image, epitomizes the passion many Filipinos have for Mary.

The preponderance of detail and the gaiety of colors is an expression of an exuberance of faith that has inspired Marian traditions to evolve and flourish through generations. The foundation of this maternal link has been embedded since the dawn of the Philippine conquista when Reyna Juana of Cebu received the Christian images on her throne.

Grandeur of the past

Since the Spanish colonial era, the Filipino has always been enamored and spellbound by the solemn rites accorded to the Blessed Virgin.

Within the Walled City of Intramuros, the annual procession of the Nuestra Señora del Santissimo Rosario was the grandest affair. The defeat of the Dutch by a handful of Spanish warships along Philippine waters in the middle of the 17th century catapulted this image to superstar status during that era.

Up to this day, one cannot simply erase the grandeur of the glorious past as thousands sing the adios after the novena Masses  of La Naval in her new sanctuary at Santo Domingo Church in Quezon City.

And for her die-hard fans, to get a glimpse of the brilliantes, coronas and the capa de la Reina embroidered in gold thread and glittering with crystals.

At the port of Manila, arrival honors were accorded the Nuestra Señora de la Paz y Buen Viaje as the image disembarked from the galleon from Mexico. It was the age of the maritime powers and some Marian images were bestowed the title of being the honorary commanding officer of the navy, like La Naval and La Guia. Since the early part of the 19th century, the parishioners of Ermita in Manila had held the bota flores in honor of Nuestra Señora de Guia.

Call of the Virgin

Marian shrines in different parts of the country became pilgrimage sites owing to reported cures and miraculous occurrences attributed to the Blessed Virgin.

Calls from the latest mobile technology have not drowned the call of the Virgin.

In Manaoag, Pangasinan, a postwar phenomenon is being witnessed as thousands of devotees flock daily to the Shrine of Our Lady of the Rosary of Manaoag.

On any given Wednesday, thousands of petitions for remedies for various illnesses, solutions to family misunderstandings, requests for financial assistance and for all kinds of everyday worries are submitted to  Our Lady of Perpetual Help enshrined at the Redemptorist Church at Baclaran.

Meanwhile, the mountain springs by the church where the image of Our Lady of Sorrows is enshrined in Pakil, Laguna, has become the local counterpart of the miraculous waters of Lourdes.

Centuries of veneration accompanied by voluminous documentation of unexplained cures and miraculous events attributed to the intercession of the Blessed Virgin have earned for some Philippine Marian images canonical coronation.

In August 1625, barely five days after the image of the Nuestra Señora del Buen Suceso had been installed on her altar in Parañaque, a miraculous cure was reported in the person of a crippled Doña Maria Amada who was able to get up and walk after hearing Mass and invoking the help of the Blessed Mother.

In 2000, after over 300 years, this same image was given her golden crown during the rites of canonical coronation attended by the highest officials of the country.

May as Month of Mary

Throughout the Philippines, May is the month of Mary. With flowers abloom, it is time for the dalaga to indulge in all kinds of facial and hair treatments as she is about to walk around town as the Reina Emperatriz of the Flores de Mayo.

Parents groom their young girls to prepare for their role as the Ave Maria angels of the Reina de las Flores. Buntings are hung over streets and singkabans frame streets where this mix of pageantry and walk of faith shall pass through.

In the heritage town of Malolos, on the very first day of May, one can feel the presence of the Blessed Virgin as the alay ng mga bulaklak is held in every visita of the town.

Weekly, sagalas make a procession around their respective barrios in various styles of the Filipina dress as entourage to the flower-bedecked carroza of the Virgen de las Flores.

For 20 years now, the Hermandad de la Virgen Maria of Malolos has mounted exhibits as an offering to the Blessed Virgin.  Since the first exhibit mounted in 1992, founding members of the Hermandad, led by Edwin Maclang, have made it their mission the propagation of devotion to the Blessed Virgin and the preservation of the wealth of heritage in the many Marian traditions past generations had bequeathed to us.

With Rev. Fr. Vicente Lina Jr. at its helm, the Hermandad has encouraged Marian devotees from different parts of the country to join in the devotion to the Mother of God.

This year’s exhibit is titled “Yo Soy La Inmaculada Concepcion” as a fitting tribute to the patroness of Malolos under this venerated title, and whose image was canonically crowned in solemn ceremonies last March.

Various representations of the Immaculate Conception in painting, prints and sculpture shall occupy a special hall at the Museo Diocesano at the historic Barasoain Shrine Complex for an exhibit May 6-12.

Heirloom images of the Bautista, Reyes and Tantoco families will be exhibited.

Among the exceptional pieces are the palm-size solid ivory image of the Virgen de la Inmaculada from the lola of Rey de la Cruz; an old image from Mexico owned by Noel Abquilan; a lovely 19th-century image of Italian provenance from Francis Casas; prewar prints, estampitas and novenarios, a life-size ivory image of Jorge Allan Tengco; a gold-leafed Inmaculada in the manner of the Malabon images of Manny Castro; and the antigo ivory image under the custodianship of the Bishop of Malolos.

From the days of old when devotees trekked to the pilgrim church of Antipolo on hammocks, to our present-day viewing of Marian events on the Internet, the maternal message of the Blessed Virgin continues to reverberate in the myriad of rituals and traditions that surround her devotion.

It’s flower power now as peace. It’s the call for peace through prayer and works of faith and charity.