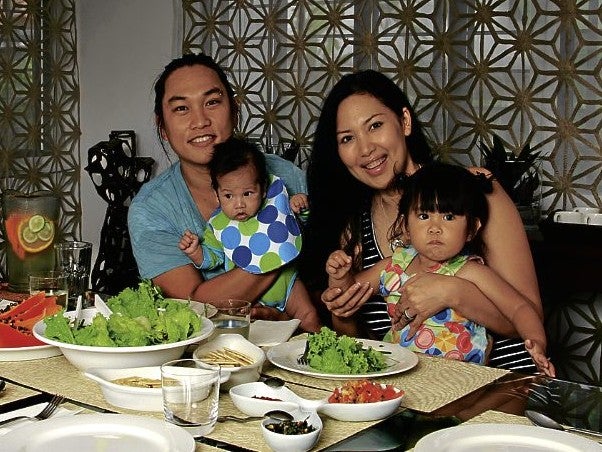 FOSTERING closeness over a meal prepared by Jinggoy. The kids are wearing Spinkie, naturally.

Right in the middle of a sales pitch on her self-made baby products, former beauty queen-turned-designer/businesswoman Mutya Laxa-Buensuceso suddenly stops. She hears her two-year-old daughter crying in another room. “Si Mayumi umiiyak!” she gasps.

Regaining her composure on realizing that her mother-in-law and nanny were on hand,  Mutya shifts gears again to market her business. The scene is typical of a mompreneur, a word that describes mothers who invent products for their needs and do business at home while raising their children.

A New York Times article, “If These Moms Can’t Find It, They Invent It,” attributes the rise of mompreneurs to the Internet and social media, which allow mothers to exchange ideas or conduct business without having to leave the house. “Inventing is also a means of channeling energy for ambitious career women who suddenly find themselves changing diapers and searching for lost sippy cups,” wrote NYT. Women traditionally do the shopping in the family, but if they can’t find what they like, they create it themselves.

Such is the story of Mutya and her merchandise, Spinkie. A second-generation beauty queen (her mother Alice Crisostomo was Mutya ng Pilipinas in 1970), Mutya held the same title from 1990 to 1992 (Mutya ng Pilipinas was interrupted by the Gulf War in 1991). She then worked in marketing for local and multinational companies. Her last post was global brand director for Pond’s in Unilever’s regional office in Singapore.

After giving birth to Mayumi, Mutya decided to leave the corporate life. “I don’t see myself traveling every other week anymore, not being part of the family and not seeing the milestones,” she says.

Like most first-time parents, Mutya and her husband, artist/furniture designer Genesis “Jinggoy” Buensuceso, wanted to give the best for their baby. However, of the plethora of baby products they purchased, only a handful were useful but were found wanting in style.

While living in Singapore, Mutya did all her research and established her network through the Internet. The mother then developed products according to the needs of her daughter. She set up criteria: functional, fashionable, fun and user-friendly. She refers to them as “enablers” that allow parents to look after their children without too much fuss.

Spinkie’s star product is the Butterfly Pillow, which will soon get an industrial design patent. While visiting her obstetrician, she saw a baby whose head and neck were propped on a U-shaped pillow that kept the head from bobbing. Researching on chiropractic cervical pillows, Mutya designed the Butterfly Pillow.

Through the Internet, she collaborated with a mother based in the States who specialized in pillows. “We were making products from the US. I trained, transferred the technology and improved the design when I came back to the Philippines,” says Mutya.

Unlike the bulky nursing pillows, the Butterfly Pillow can serve as a baby lounger to assist the infant’s physical development. Mutya explains, “For tummy time in the first three months, we discovered that when the baby lies on its tummy on the pillow, the baby reflexes to push up. When I leave the baby for 15 to 20 minutes, it strengthens the back and prepares the baby for crawling. It also prevents colic so the baby can burp. When the baby is six months old, you can use it for sitting support. For the year-old toddler, it can be used for sleep, especially when the child has a cough or cold and the head needs to be raised.”

A customer wrote to thank Mutya for the Spinkie pillow. Her three-month-old baby had suffered from bronchitis and the hospital pillows were inadequate. The Butterfly Pillow propped up the baby, who was further supported by pillows on both sides.

Spinkie’s products use the finest designer fabrics. The blanket is backed with a special baby fabric called minky, an ultra-soft chenille or microfiber that lends a tactile quality for the infant. The burp cloth uses an absorbent material that is sturdy and reusable. Instead of velcro that irritates the skin, a snap-on is used for the bib. “This is useful when the baby removes the bib and throws it on the floor, which happens all the time for toddlers,” says Mutya.

The wet bag is lined with Procare barrier fabric used in the medical community. “It’s odor-proof. You can put soiled cloth diapers, wet clothes with vomit, and it won’t smell. The liquid won’t seep through,” says Mutya. Likewise, the diaper mat can be easily wiped. With its cotton backing, the baby feels comfortable while diaper change.

In Singapore, she started to go online (www.spinkie.com). Aside from  the Singapore clientele, the foreign market consists of the US, Greece, France and the Scandinavian countries. Spinkie’s products are found in Mango-Tango, Holland Village, and Takashimaya.

Spinkie branched into soft toys and a fashion line for girls, specializing in reversible frocks. Through her network, Mutya was able to get American models and a photographer for the images of Spinkie. She will introduce ruffled fashion liners to cover diapers. With the birth of her son, Malaya, she will embark on a boys’ apparel line.

When the family returned to the Philippines, Mutya formally established Spinkie and tapped the local market, which now comprises the bulk of her customer base. Spinkie is found in Hobbes and Landes, Baby and Beyond, Numa and Medela House.

On Spinkie’s quarterly double-digit growth, Mutya explains, “I answer the need for juicy and delicious products. Babying shouldn’t be a chore. It should be fun,” she says. “The most salable are the pillow, the clothing line and hair accessories. This is really me. When you express yourself  and put your heart into something, it flies.”

Like with all working mothers, there is still the challenge of balancing business and family life even if Mutya is home-based.

“You don’t know when to stop, especially doing business online. I deal with people in other countries with different time zones. When I feed Malaya, I’m checking my phone which is linked to my e-mail,” she says. Mutya can take breaks to be with her children. Likewise, they instinctively know when not to disturb her while working. Her design business is also a way to teach children color, texture and fabric.

In the evening, there are rituals such as storytelling, cuddling or tickling their toes. “It sounds petty, but we look forward to it,” she says.

Although the Buensucesos are hands-on parents, they also maintain their private time together.

“That’s central to everything—the two of us as the core,” she says.

Jinggoy also points to Someone Up There and their mentors, Mutya’s older sister and brother-in-law Maricel and Anthony Pangilinan, who advised them to maintain respect for each other even in tense moments.

Mutya, 39, is 10 years older than Jinggoy, 29. They met in Manila when she wanted to commission him for an artwork. She was impressed with  the uniqueness of his installation—linear art made of burnt aluminum. She searched for his e-mail to set up a meeting. Meanwhile, Jinggoy was smitten by her online photo and knew that the meeting would be fated. What turned out to be a supposed 30-minute client meeting became a five-hour dinner date.

Jinggoy followed Mutya to Singapore and worked as an artist on commission. They were married in 2009. After starting a family, the couple pooled their resources together to start a company, Black Friday Marketing, of which she is the president and chief designer while Jinggoy is  the creative director. As Spinkie’s business grew, a reseller got Mutya to consign her hair accessories in Takashimaya, and that got her to working all night. Jinggoy bought his first sewing machine to help her sew the flowers on the headband.

Unmindful of the age gap, Mutya describes Jinggoy as a Renaissance man and a trustworthy soul. “He’s mature for his age.   As parents, we have shared responsibilities. For the newborn, there will be late nights so we take shifts.”

Businesswise, she gets his advice on color and design. Says Mutya, “On the high quality, we’re discriminating because we’re both product designers with rigid standards. We won’t sell anything that we won’t use in our bed.”