Look! Up in the sky! It's Supermoon! Due Saturday | Inquirer Lifestyle 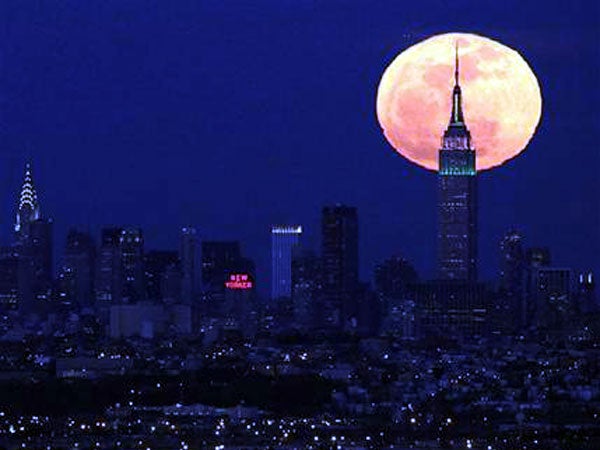 A full moon rises behind the Empire State Building in New York in this view from Eagle Rock Reservation in West Orange, New Jersey, in this April 6, 2012 file photo. The biggest and brightest full moon of the year arrives Saturday night May 5, 2012 as our celestial neighbor passes closer to Earth than usual. (AP Photo/Julio Cortez, File)

Look! Up in the sky! It’s Supermoon! Due Saturday

NEW YORK – The biggest and brightest full moon of the year arrives Saturday night as our celestial neighbor passes closer to Earth than usual.

Saturday’s event is a “supermoon,” the closest and therefore the biggest and brightest full moon of the year. At 11:34 p.m., the moon will be about 221,802 miles from Earth. That’s about 15,300 miles closer than average.

That proximity will make the moon appear about 14 percent bigger than it would if the moon were at its farthest distance, said Geoff Chester of the US Naval Observatory. The difference in appearance is so small that “you’d be very hard-pressed to detect that with the unaided eye,” he said.

The moon’s distance from Earth varies because it follows an elliptical orbit rather than a circular one.

Like any full moon, the supermoon will look bigger when it’s on or near the horizon rather than higher in the sky, thanks to an optical illusion, Chester noted. The full moon appears on the horizon at sunset. On the East coast, for example, that will be a bit before 8 p.m. Saturday.

The supermoon will bring unusually high tides because of its closeness and its alignment with the sun and Earth, but the effect will be modest, Chester said.

But no matter how far away a full moon is, it’s not going to make people kill themselves or others, commit other crimes, get admitted to a psychiatric hospital or do anything else that popular belief suggests, a psychologist says.

Studies that have tried to document such connections have found “pretty much a big mound of nothing, as far as I can tell,” said Scott Lilienfeld of Emory University.

Lilienfeld, an author of “50 Great Myths of Popular Psychology,” said the notion of full moons causing bizarre behavior ranks among the top 10 myths because “it’s so widely held and it’s held with such conviction.”

Why do people cling to the idea?

Lilienfeld said a key reason could be the way people pay attention to things. If something unusual happens to occur during a full moon, people who believe the myth take note and remember, even telling other people because it confirms their ideas. But when another full moon appears and nothing out of the ordinary occurs, “they’re not very likely to remember” or point it out to others.

So in the end, he said, all they remember are the coincidences.