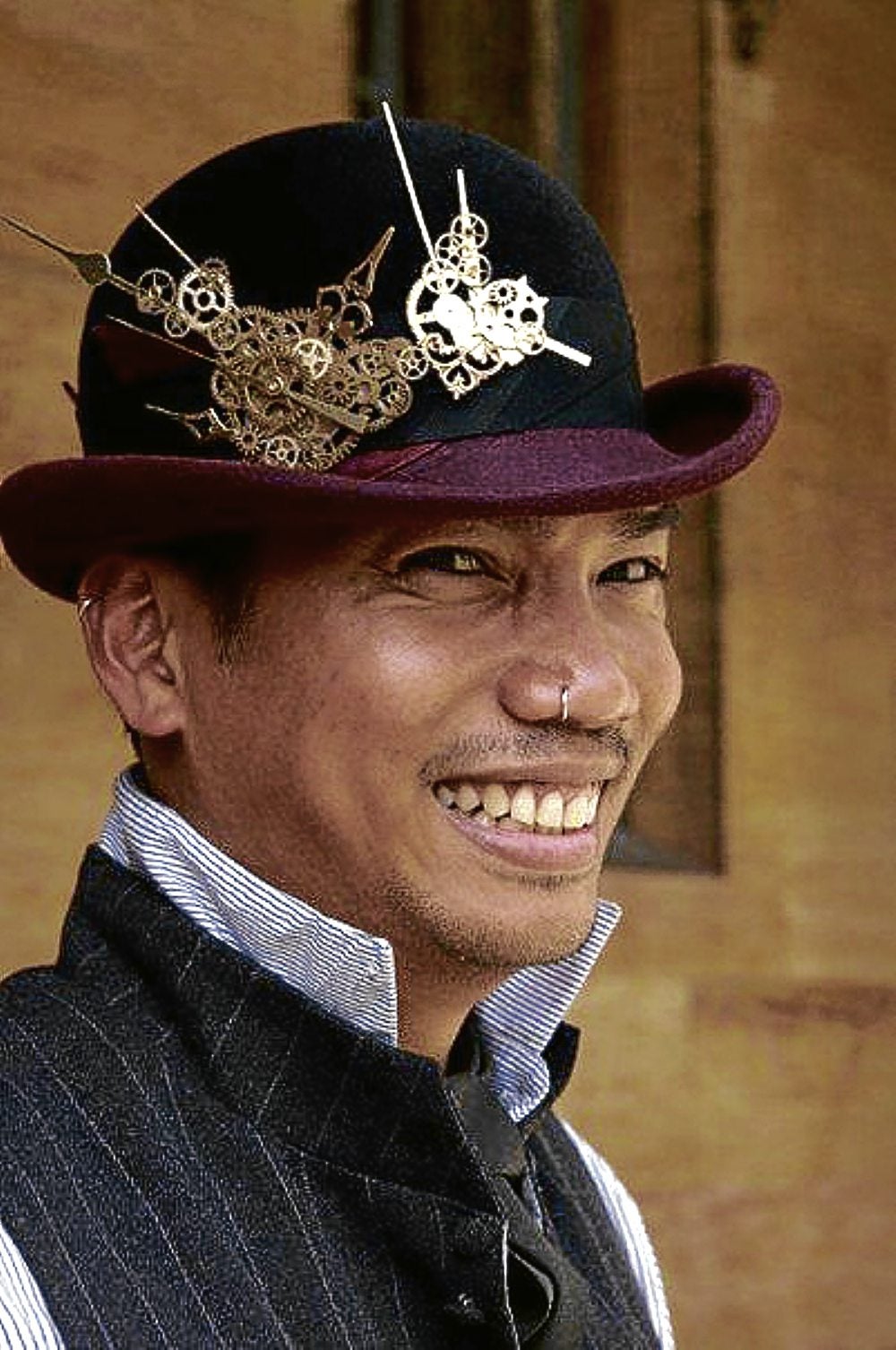 From dancer to milliner

Harvy Santos, a former dancer of Ballet Philippines, was announced as a runner-up in Grazia Magazine’s “Hat Factor” millinery contest, which is part of the Cultural Olympiad, a series of events celebrating the 2012 Olympics in London.

Santos created the piece to be worn by any gender, though he had “shock-factor in mind, say, having it as a fashion editorial piece or something for Lady Gaga to wear.”

For materials, Santos used PVC and latex as well as sinamay, “which they loooove here [in the UK]!”

Santos trained at the Cultural Center of the Philippines Dance School prior to joining Ballet Philippines 2, BP’s junior performing company. He moved to Hong Kong in 1997 to study at the Academy for the Performing Arts under a scholarship he’d won. After graduation, he joined the Hong Kong Ballet and danced in all its major productions for six seasons.

He left dancing in 2005 to start Harvash Creations, devoting himself to design projects full time doing hair and makeup, costumes, and wedding dresses. Projects ranged from bespoke costume and couture commissions for individual clients to large-scale productions for stage and television. He designed for the HK Ballet, including 20 tutus for “Paquita” and original headpieces for “Swan Lake.”

The name “Harvash” is from a nickname he got from a visiting French choreographer when Santos was still with BP. “Vache is French for cow, so, moooo,” he laughs.

In 2008, Harvy moved to London for love. One day, while shopping for materials to make a Halloween costume, he noticed a copy of “The Hat Magazine.”

“It opened up a whole new world for me. I’ve always wondered about hats and anything placed on the head. This magazine has been my millinery fairy godmother.” Through the listings in the magazine, he signed up for a five-day millinery course with Rose Cory, who used to make hats for Queen Elizabeth.

“From then on, I went literally hat-mad and just kept on making hats.” Santos won second place at a competition for the Royal Ascot in 2009. “I had a photo of my hat in ‘The Hat Magazine.’”

He enrolled in a full-year course at Kensington and Chelsea College where he was awarded a Higher National Certificate with Distinction last year. He also won an award from the Worshipful Company of Feltmakers for one of his creations last year.

Santos has apprenticed with Noel Stewart, where he made headdresses and hats for Kylie Minogue’s Aphrodite World Tour, and Stephen Jones, where he was part of the team that worked on hats for the collections of Marc Jacobs and John Galliano.

Santos started working for the Royal Opera House this year, currently working on headdresses for an upcoming production of “Falstaff.” “So far we have been dealing with massive deer antlers stuck on top of deer stalker hats, famously known as the Sherlock Holmes hat. There’s a total of 57 of them for the actors and chorus. We also make headdresses and headpieces for the dancers of the Royal Ballet.”

He’s done work on a revival of “La Boheme,” restoring hats from previous stagings. “It was really awesome knowing how old these productions are. It didn’t register much to me until I was replacing a hat-lining. Inside the lining I found a folded-up Daily Mail newspaper from Nov. 25, 1955 that they used to decrease the circumference of the hat to fit a performer’s head! That hat might have been made even earlier than 1955. That hat is definitely the oldest thing I’ve ever encountered.”

“I have ex-colleagues from the English National Ballet and sometimes they do guestings in music festivals and other events and the dancers themselves ask for my help.”

The performing arts doesn’t have an exclusive hold on Santos’ hats, fascinators (a large hair decoration or a miniature hat), and headpieces. “I’ve done a few commissions here and there. I have put up my website initially as an online portfolio. People, magazines and bloggers have been inquiring lots and showing lots of interest.”