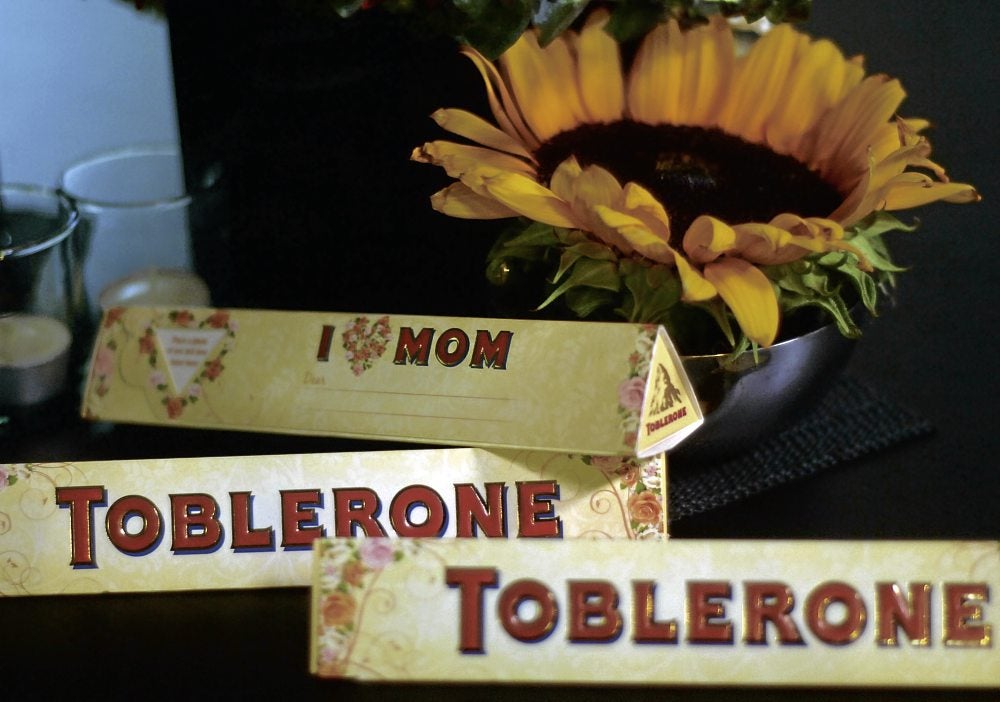 SPECIAL I Love Mom Toblerone bars. The chocolate brand’s “I Love Mom” online photo contest is ongoing until May 18. Visit TobleronePilipinas on Facebook.

Verbally saying “I love you” to your parents is uncommon among Filipino kids, especially when they reach the tricky young-adult age. This usually bothers parents, but they should first realize three things: This is common globally, this does not mean their children don’t love them, and the kids are growing up—and they should respect that.

These are reminders from Pia Nazareno-Acevedo, a “life coach,”  founder and CEO of The One Core Success Center, Creative Human Resource Group and Love Institute—organizations that specialize in relationships. She recently gave a parenting talk organized by Toblerone chocolate in line with Mother’s Day on May 13.

“Asians are more reserved and conservative, but Asians also serve their parents best. They may not say ‘I love you’ often, but they take care of their parents until they are old, and putting them in a home is unacceptable.”

It’s so easy for kids to say “I love you” when they are young, but they could suddenly just stop saying “I love you” or “I love you, too” to their parents once they enter adolescence.

Acevedo said teens are at a phase where they are trying to be independent. They are vulnerable, and saying “I love you” signals an opening for their parents to come back into their lives, just when they are trying to do things on their own.

“Parents should let their kids go. Some parents’ self-worth relies on their children. If the child became sweet again, the parents might see this as a sign and ‘attach’ themselves again to the child, so the child would detach and keep them at bay,” she said.

Remember to keep your distance; don’t put a child on the spot. If your kid is with friends, don’t scream “I love you” and feel bad if he or she does not reply. Don’t treat the growing child like a baby.

Then comes this awkward, even dreaded time for most parents: The kid falls in love. The parent would see the son or daughter saying “I love you” over Facebook and Twitter to the boy/girlfriend, but never get any “I love you” from them.

Acevedo gives several pointers in handling this situation. Never start with the “You’re too young to be in a relationship!” sermon. Instead, “Ask the child; be curious. Ask, ‘Why do you like him/her,’ so that you will know how they operate, how they’re thinking.”

If a parent knows the child well, he or she would be able to give proper advice and the child will listen. “Any parent who has gone through puppy love knows that this is an I-love-you-to-death phase. There is an initial high, and parents should give the kids space.”

Parents should let their kids make their own decisions at an early age, be it in saying “I love you” or choosing their own clothes.

“The parent may say, ‘Eh anak ko ’yon!’ (but s/he is my child!). It’s true, but if the family keeps making decisions for the child, they will not mature or grow  up.”

Also note that this “adolescence phase” now has a new definition. According to Acevedo, modern psychology says the “young adult phase is now from 13 to 26, and could extend all the way until 32.

“An adolescent is defined as someone who is not sure about his identity. The age range is already stretched. Iba na talaga ang panahon ngayon (times are really different now),” she said.

“My advice to kids who are 26 and still not sure what to do with their lives is to move out of the parents’ house so that they can define who they are.”

That probably means it would take a tad longer before the parents hear “I love you” from young-adult kids, but remember that saying it is not the only way for children to express their love. It could be through other words, such as asking “Kumain ka na ba?” or saying “Ingat” when you leave the house.

Saying “I love you” via text, or online on Facebook or Twitter also counts. Giving pasalubong or gifts, like the limited-edition Toblerone that comes with an “I Love Mom” sleeve, is also a recognized “love language.”

Toblerone helps kids say “I love you” to their moms with the “I Love Mom” online promo (see sidebar), ongoing until May 18.