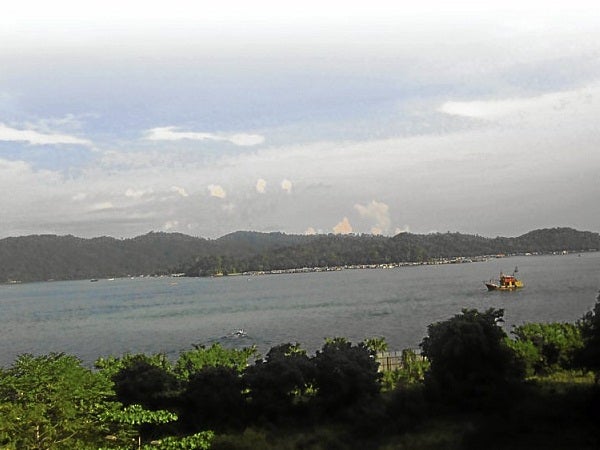 Sometimes, things fall so snugly into place that we just doubt the alleged randomness of life. Exactly a week before my trip to Malaysia, Borgy and I were at Naia Terminal 3, leading an angry mob before Airphil’s check-in counter.  They had just cancelled all trips to Caticlan due to safety issues, and we were being rerouted to Kalibo.

The day’s horror went on: The airport’s air conditioning broke down, our flight was further delayed, we were given warm soft drinks as compensation and had to pay if we wanted water or ice. Voices were raised, fists were shaken, but to no avail. We were mere pawns in the sad plight of budget flights.

Labor Day, en route to Clark International Airport (CIA): Ted Failon was on air, ranting about the congestion and horrible airline services at Naia. He emphasized that more flights should be moved to Clark, and I was ecstatic at the perfection of the moment: I was about to physically and immediately try out two promising alternatives to our ridiculous airport situation. In just a few hours I would be taking off from CIA via Seair, which has just begun offering budget international and domestic flights.

Destination: Kota Kinabalu, on the northwest coast of Borneo. Aboard Seair, one-way flights could go for as low as P1,000, tax-exclusive. A new player in the mad scramble for cheap seats! Could this be the beginning of low-cost trips without delays, despair and celebrity brawls?

Well, the Clark terminal is a little cramped, and our flight was delayed for a few minutes, but I remain hopeful. All we need are reliable shuttle services to and from CIA, and an efficient airport system that could handle huge volumes of people, and our troubles may just be over. Nothing like a little competition to keep airlines on their wingtips.

We landed at Kota Kinabalu at 6 p.m. The sky was pink and their airport is fantastic. We automatically wished the same for ours. Abdullah, our jolly tour guide, met us at the exit. There was a little confusion as to which side of the road we should be on, as vehicles drove on the left-hand side. We were shuttled to Gaya Centre Hotel at the city center, some 15 minutes away. A taxi ride would cost around 25-30 RM (Malaysian ringgit; about P400).

Kota Kinabalu is nestled right beside the South China Sea. From the hotel the blue water is immediately visible, and the streets are organized and nice to walk on. I found smaller hotels proclaiming rates for as low as 50 RM (P650), and restaurants serving all manners of taste: Curry, seafood, Western, Chinese. The perks of being a serious cultural melting pot.

We tried a ton of seafood, but sadly nothing too exotic. A lot of variations of our own dishes, mostly, like lemongrass in nilaga, wild amounts of chili in kinilaw, chicken instead of pork in hotdogs (no pork: Big Islam population)—tasty stuff.

We were on a package tour, so most of the time our meals were accompanied by cultural dancing and singing. We tried identifying those we could recognize: “That’s from the Badjao!” or “That’s tinikling!” or “That looks like our Ifugao dance!” and then “How come we don’t see these performances anywhere in the Philippines anymore?” One of us answers, wistfully, “Because we killed it.”

On our second day, Abdullah took us to the harbor and we jetted off to nearby Manukan Island (speedboats cost around 50 RM). It took all of five minutes, and from the pier we could already see schools of fish swarming around snorklers, as well as other islands, also open to the public. At Manukan Island, people could pitch a tent or sleep in one its luxurious villas, or simply stay the day for 15 RM.

We then made for the Lok Kawi Wildlife Park, where I was hugely disappointed to learn that the “nature reserve” is nothing more than a zoo. There is no other way to put it: Animals in captivity are just sad. (I have worked at a tiger safari in Subic and their eyes say it all. One day, I will release all them tigers into the wild, where they belong.)

On a positive note, Sabah’s Tourism chair looked quite serious about putting the island’s spectacular gifts of nature above profit. He emphasized the importance of the quality of tourists over quantity, and made it very, very clear, between stabs of squid and tilapia, that their government spends more money on the environment than on development.

It seems they understand very well that people come to Borneo for the ocean, the rivers, the mountains, and the rainforests, and that sprawling resorts and classy hotels should be optional. Kota Kinabalu is the gateway to these deeper and more dramatic adventures, and yet the city, on its own, already has so much to offer.

We were handed brochure after brochure of options, and images of deep-sea diving, orangutans, proboscis monkeys, huge flowers (Rafflesia) and Mt. Kinabalu leapt out at us. It would take a week just to go through all the material.

Our last day was spent at the Mari Mari Cultural Village. We were beginning to suspect that we were being exposed to perhaps a little too much culture, but we were still pleasantly surprised. First of all, the tour included jumping up and down a wooden version of a trampoline with seriously sculpted tribesfolk. And then, said tribesfolk could sing lines of Tagalog songs, which they picked up when a teleserye was shot in those parts. Finally, we were allowed to take home as much bananas as we could carry (we thought we’d get hungry at the airport).

After another fantastic cultural performance, which ended in a heart-stopping bout of tinikling, I seriously began to feel that soon, younger Filipinos may have to go to countries such as these to learn about their ethnicity.

We did a quick stopover at a tiangge they fondly called the Filipino Market, mostly because a lot of the vendors come from Mindanao and sell items originating from our shores. I bought a load of pearls, and chatted with the former Filipino citizens. Most of them carried Malaysian passports now. When I ventured to find out why they left Mindanao, they very softly told me, “Walang gulo dito (It is peaceful here).”

I would miss the peace of Kota Kinabalu, too. What Abdullah called a traffic jam was a mere 15-minute hold-up on our way to the airport. It was an easy, breezy, three-day trip to a place of unbelievably rich ecological and cultural significance. And though I would have opted for the jungle trekking, mountain climbing, and river cruising side of the coin myself, seeing how this city has grown to become such an amazing and efficient tourist destination in so little time is in itself incredible.

We arrived at Clark a little past 7 p.m., and already a little commotion began to unravel at the immigration lines. I had to smile. I missed this crazy urban jungle, too.