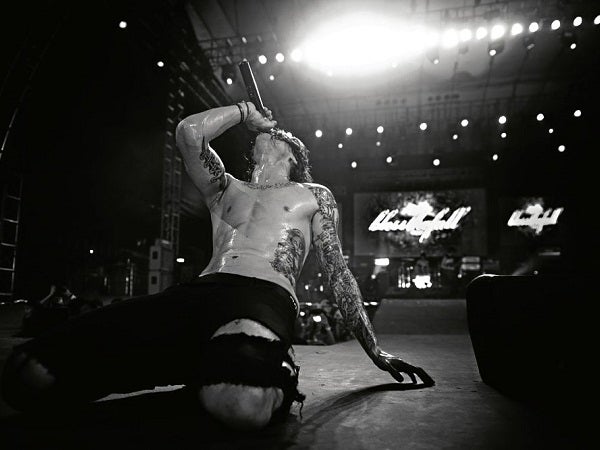 The apostles came. They saw. They rocked out and kicked butt. And by the time you’re reading this, I may have gone deaf. 12 years of absolute destruction, and it just keeps getting bigger, louder and heavier.

Not to be outdone, local favorites Chicosci, Franco, Kamikazee, Urbandub, Sin and Intolerant played for Pinoy pride. It was without a doubt one of the loudest and most massive festivals held in the country, much to the delight of headbangers, myself included.

Thousands of metalheads braved and endured the scorching heat. As early as noon, a sea of black-clad rockers from all over the metro was charging the gates, screaming in excitement for the madness to begin. Feelings of restlessness, anxiety and excitement filled Amoranto before the show started.

Chicosci played first, during which throngs of fans in attendance screamed and cheered. Local superband Franco came next, and the crowd was bursting with energy, singing in chorus with frontman Franco Reyes with the band’s message and groove of good vibes and positivity filling the air.

Quickly following up was local favorite Kamikazee, who drove the already hyped-up crowd wild. Frontman Jay Contreras fed off the audience’s energy with his trademark zany antics and stage presence. The band was like a furious fireball; they were all over the stage dishing sweet, heavy riffs, with the horde of rockers jumping, singing and screaming along with Jay. These local favorites playing back-to-back set the stage for one of the biggest and heaviest festivals ever held in the country.

The first foreign act to play was We Came as Romans. The sweltering heat didn’t matter as the morbid hordes of headbangers were on their feet, pumping their fists hard in the air and jumping nonstop. Mosh pits popped up everywhere as the band played wicked post-hardcore riffs.

Hardcore veterans Darkest Hour followed after a short break.  The band first played in the country four years ago and I remember wanting to kick my own ass for missing it. Even though the band’s more than a decade old, they showed no signs of weakness. In classic form, Darkest Hour dished out an hour of their trademark pulse-pounding hardcore sound that feels like a massive kick in the head, but in a good way. The band absolutely killed the stage, with the 30,000 strong audience screaming for more.

Walking out of the theme music of 20th Century Fox came prog-metal and djent-metal pioneers Periphery, who were well-received by the ecstatic horde of fans in attendance (as evidenced by the wild screaming and jumping). Taking chugs of beer in between songs, vocalist Spencer Sotelo was alternating between growls and high-pitched falsetto wails, complementing the band’s signature distorted metal sound that blew the minds of fans in attendance.

Blessthefall was next on the schedule but unfortunately, the show experienced an hour-long delay due to technical difficulties. The crowd of rockers increasingly grew impatient and showed no signs of fatigue, chanting the band’s name in unison and screaming “Pwede na yan!” as the band kept doing soundchecks.

The stage lights were switched off for a few moments, then as soon as the lights turned back on the band came charging to the stage at full speed, wasting no time to lay down metal to the hungry crowd that was undoubtedly stoked with what they finally asked for.

August Burns Red started rocking the stage after and was also well-received by the enthusiastic fans with their metalcore sound. After a short break, it was the moment that everyone was waiting for: the return of Arch Enemy. Everyone was anxious for the band to play, and you could cut the tension in the air with a knife.

All of a sudden, a massive pyrotechnics show erupted on stage, setting a grand entrance for Arch Enemy, who immediately dished out unbelievably powerful and hard-hitting drums and face-melting metal riffs, injecting massive sparks of energy and rejuvenating the tired but still music-hungry crowd.

Arch Enemy looked as if they were possessed, on a mission to deliver absolute, unadulterated pure metal mayhem. The band gave a performance that the legions of metalheads in attendance won’t forget. Everyone was in a state of metal bliss.

It was already past midnight and the sea of sweaty bodies were still there, exhausted but still in high spirits and raring to go. A lot of rockers still stayed till late to watch local favorites Urbandub, Sin and Intolerant close the show.

This year’s Pulp Summer Slam was one of hell of a show, and my neck still hurts from all the head-banging. I think I may have slight brain damage from all the slam-dancing. That was one of the most epic, loudest and biggest festivals I have ever had the privilege of going to as part of the media via PinoyExchange.com. I’m seriously curious on how Pulp will top this year’s event. Invite Slayer, Metallica, Iron Maiden, or Judas Priest, maybe? Bring Joey, Johnny, and Dee Dee Ramone back to life? Invite Black Flag for a reunion show? I can only wish.

For now, I need to put some ice on my neck and maybe get in contact with a good ENT doctor. Was it totally worth it? Hell yes.