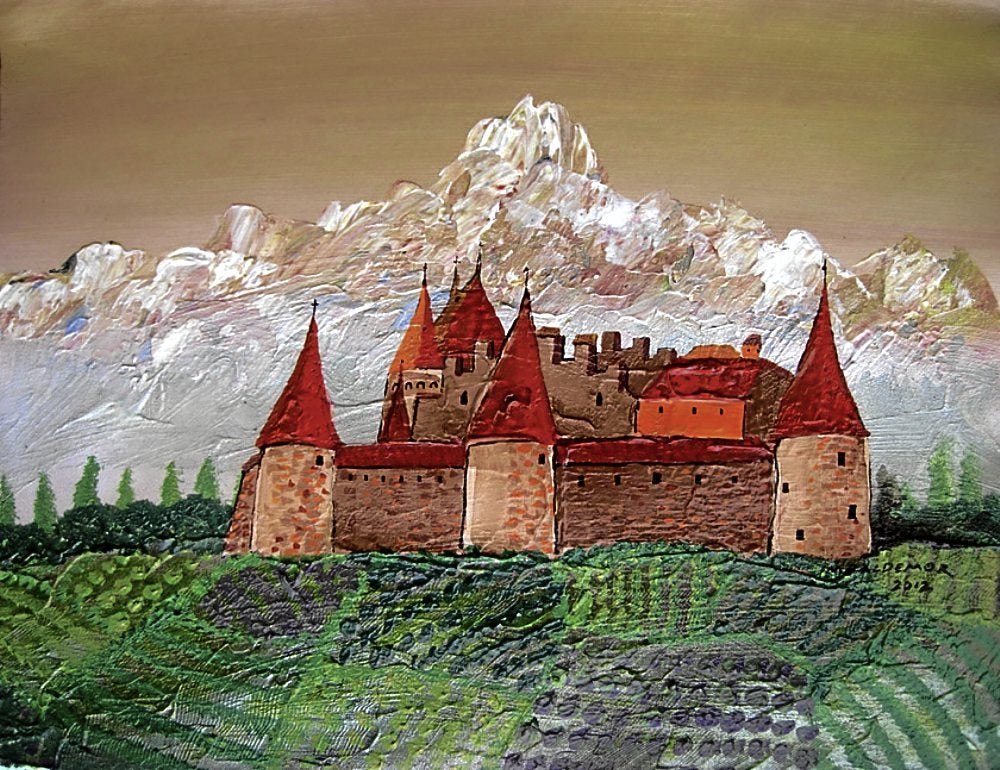 “CASTLE Aigle at the Rhone Valley”

As a neutral country, Switzerland welcomes its doors to refugees and political exiles from all nations. But this land of awe-inspiring beauty also serves as a sanctuary for a great number of travelers who come to refresh themselves in the bracing mountain air.

A vacation in Switzerland will give anyone renewed vitality in the months to come once you experience its ever-verdant hills and pollution-free climate.

Whenever I speak of these lands where I traveled, lived and painted for months, a feeling of nostalgia and sentiment overwhelms me. Recalling the good times with my Swiss artist friends, the very hospitable Swiss families from Sears, Appenzell, Basel and Bern who welcomed me with open arms, there is no excuse good enough for me not to return to this land of friendship and freedom.

Basel prides itself on its monuments and art; yet its people are not just content with its past, since the modern-day city has so much to be proud of.

As you discover its medieval splendor in its cathedral-like streets and squares, you also discover the city’s almost sacred devotion to art.

Basel is the capital of the half canton of Basel Stadt, in Northern Switzerland. Located by the Rhine river, it is one of the more popular destinations in this country.

The city is modern yet was designed to preserve most of its “old town” heritage, one of the finest in Europe. The town has picturesque Gothic sections with magnificent fountains, such as the one at the market square in front of the imposing 16th-century town hall and the ones at its 27 museums. With its huge storage installations, it has also come to be known as Switzerland’s “oil well” as well as its largest “chemical laboratory.”

I lived in the city for 90 days in 1994, when I was fortunate to be the first Filipino visual artist to be granted an artist-in-residence scholarship in the Internationale Austauch Ateliers Region Basel, under the sponsorship of the well-known Christoph Merian Stiftung of Switzerland.

I was fortunate to see 3,000 artworks during my stay in Basel. However, the biggest discovery during my trip was developing an intimacy with the works of Jean Tinguely, the foremost Swiss sculptor.

Tinguely’s works are primarily concerned with the movement of machines to satirize technological civilization. Yet, this does not get in the way of humor. Some of his auto-distractive works transformed kinetic art into performance art.

Basel’s most outstanding landmark is Tinguely’s fountain, a merry sight in front of Basel’s Theater. Imagine, if you will, a small pool, a “playpen” of metal sculptures, assembled intricately out of various knick-knacks of modern conveniences.

Like grotesque but mischievous children, the sculptures endlessly annoy each other in an endless routine of Three Stooges slapping, with jets of water spraying at each figure. I was so fascinated by this sculpture that I made a series of aquarelles on-the-spot using water from the fountain.

Tinguely’s most famous work is the exuberant Beaubourg Fountain outside the Pompidou Center in Paris, France. The work was made in collaboration with Niki de Saint Phalle, and was completed in 1980. It features fantastic mechanical birds and beast that spurt water in various directions.

In recognition of his genius, the F. Hoffman-La Roche AG in Basel recently named its art museum in Tinguely’s honor.

Every year, Basel hosts the International Art Fair. Now, more than 40 years old, the fair has lost none of its excitement and freshness. It features classical and modern masterpieces whether from any museum in the world or works by contemporary international artists, ranging from traditional paintings to multimedia explorations, and from sculpture to performance art.

I held on for 18 years to my series of aquarelle and pen-and-ink paintings about Switzerland and cherish them dearly. These, of course, are the same paintings I did during my three months of art residency in Basel in 1994.

My thanks go to the Swiss Embassy in Manila, the Department of Foreign Affairs, and the Ayala Museum for the realization of this major art exhibition in time for the commemoration of the 150 years (1862-2012) of the diplomatic relations between Switzerland and the Philippines.

On May 28-June 28, my painting collection “Timeless Landscapes of Switzerland” will be on view at the Ayala Museum.