Kritika 2012: Shaping the next generation of critics | Lifestyle.INQ ❮ ❯ 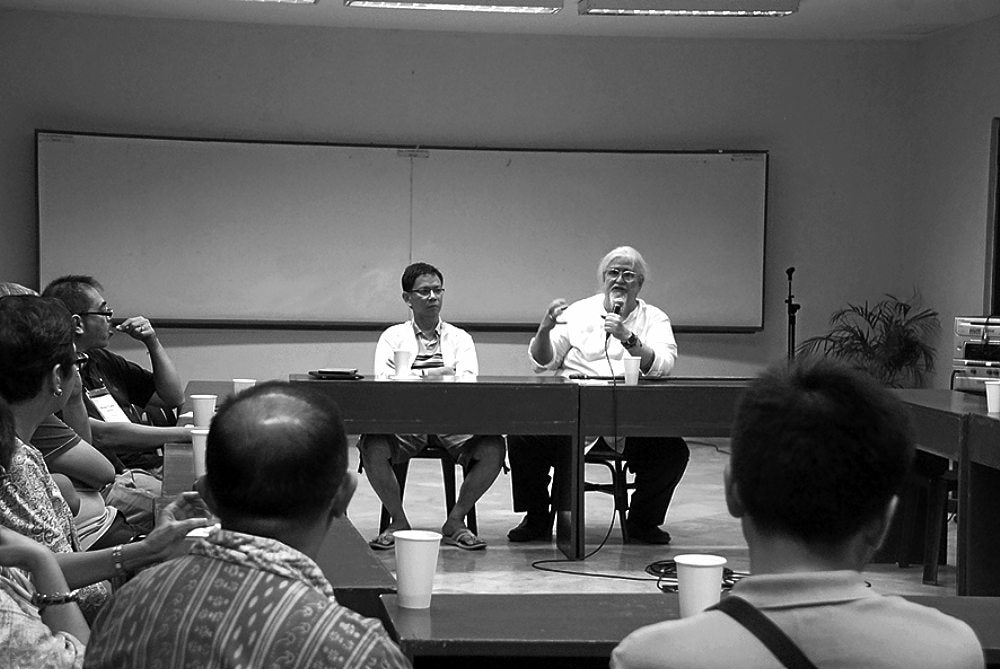 FORUM with Peque Gallaga at the 2012 Kritika workshop, in celebration of 30 years of “Oro, Plata, Mata.” Kritika director Roland Tolentino serves as moderator.

Kritika 2012: Shaping the next generation of critics

Kritika, the national criticism workshop, is back.

Shirley Lua, director of the De La Salle University-Bienvenido N. Santos Creative Writing Center (DLSU-BNSCWC), says it was conceived as a workshop on art and cultural criticism that responds to the “call for the development of criticism in our country, and a need to encourage a healthy atmosphere of intellectual exchange and discourse on art and its creative process.” It seeks to discover young literary critics in the different areas of the arts and bring them to a conversation with each other and with senior critics who will serve as their mentors.

The workshop went on a 10-year hiatus after its initial run in 2002. It was recently revived under the direction of Rolando Tolentino, DLSU-BNSCWC associate for Criticism and dean of the University of the Philippines-Diliman College of Mass Communication. The workshop is grounded on a multidisciplinary, interdisciplinary approach to art and cultural criticism where the critic uses creative ways to examine an art form from multiple perspectives.

The workshop was highlighted by interface activities with the Iyas Creative Writing Workshop directed this year by SEAWrite laureate, poet Marjorie Evasco. These included a viewing of “Oro, Plata, Mata,” now on its 30th anniversary and hailed by film critics as the obra maestra of film director Peque Gallaga, who was present in a forum with Iyas and Kritika fellows; a craft lecture and poetry reading of De La Salle University’s visiting writer, Stuart Cooke; and a cultural tour of Negros Occidental.

The papers of the fellows dealt with writers’ works such as F. Sionil José’s “Viajero” (Arong); Miguel Syjuco’s “Ilustrado” (Quintos); and Isabelita Orlina-Reyes’ “In Transitives” (Serquiña), a poetry collection.

Memory and literature, metaphor and class consciousness, and the city as trope for the human condition were among the issues threshed out in the discussion of these works.

Two papers studied the works of writers from the regions outside Manila: Ramon Muzoñes’ “Margosatubig” (Barrios); and siday or poetry by traditional and modern Waray poets (Villas). The papers framed the reading of the texts within the history in which they were produced. The binaries of region/nation and center/periphery were also dissected.

Public spaces as texts were analyzed by two papers. The “queering” of cinema’s space was the bone of contention in Pascual’s “Cine, Cine Bago Quiere,” a study that wove in the history of Philippine cinema with the history of its “homosexualization.” Mata’s paper centered on the performativity of space in the architecture of Sariaya, Quezon.

Talk on the visual arts took off from the papers that investigated the visual aesthetics of Mexican artist Diego Rivera and National Artist Carlos “Botong” Francisco (Demeterio) and the controversial installation-art exhibit at the Cultural Center of the Philippines titled “Kulo,” particularly Mideo Cruz’s “Poleteismo” (Salazar). Reading our visual arts within their own terms, censorship, “art-not art,” and “good art/bad art” were issues raised.

“Criticism is a different literary genre in itself,” stressed Isagani Cruz, who took the idea even further by saying that it was a literary art form. It is both, indeed, which makes the critic an artist, too.

The direction of cultural criticism in the Philippines can be surmised from the works discussed. There is a call for more creative approaches in the study of art forms and genres that combine the best from two or more fields of the humanities and the social sciences. There is also a need for dynamism, flexibility, and reflexivity on the critic’s part for a more multidisciplinary, interdisciplinary take on critical discourse.

An anthology is set to gather the works of the 11 young critics and the distinguished panel of critics. The anthology will be edited by Tolentino and Lua.

Kritika 2012 is a project of DLSU-BNSCWC, National Commission for Culture and the Arts, and USLS-Bacolod.