Building a school up in the clouds | Inquirer Lifestyle 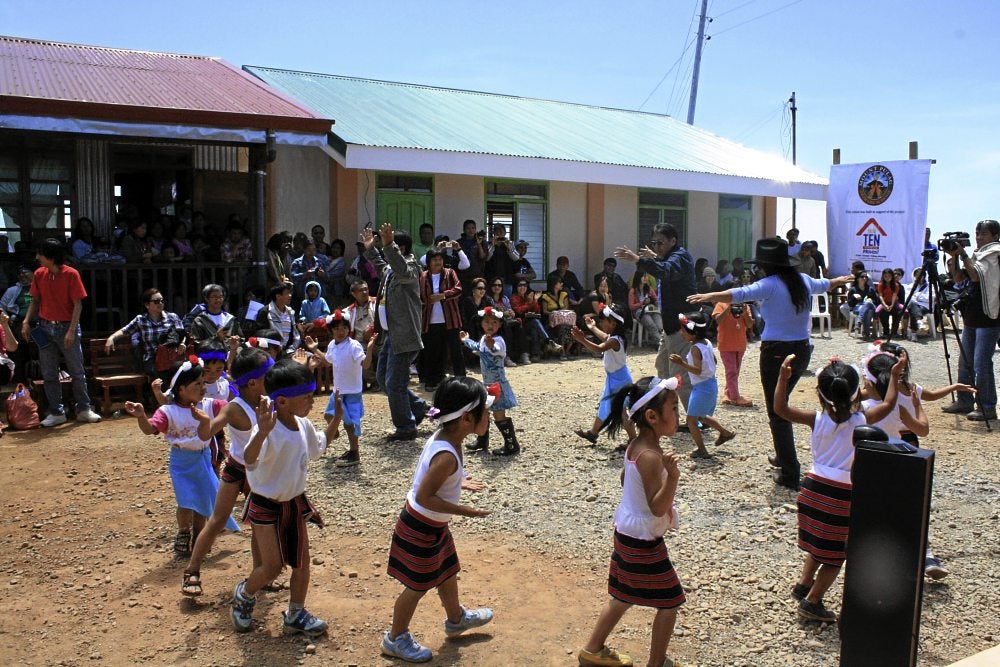 Building a school up in the clouds

I have a soft spot for schools. When I was a kid, I used to overstay at mine, just to read books and comics at the library. When I was older, I overstayed to talk to my favorite teachers, and to hang out with friends.

That was a habit I carried even to college. In one of my lowest moments, I found solace while renovating a reading room. I guess you could say school is the extension of the home, at least for me.

When I got the invitation to go to Mt. Pulag, the country’s third highest peak, to visit Mt. Pulag Primary School, where a set of classrooms was built 7,748 ft above sea level, I just could not resist. Whether it was the call of adventure or the love of school, I couldn’t tell, but despite my fear of heights, I felt so strongly about going. So one weekend in March, a few days before my birthday, I went on a trip up north.

The trip to Mt. Pulag can be really rough. The road up the mountain can be rocky, and if two vehicles are on the road at the same time, one has to give way, leading to some literal cliff-hanging moments. However, all these are forgotten once you get to your destination—aside from finally seeing the spectacular view, one will be embraced by the cool air, as if to welcome one home.

Once we got to Sitio Babalak, where Mt. Pulag Primary School was located, the residents greeted us warmly, as though they’d known us all their lives. We were treated to a feast, and while I never really cared for vegetables in Manila, up in Sitio Babalak, I just had to try them. I couldn’t explain it, but the vegetables tasted different, more refreshing.

After dinner, lawyer Angelo Valencia, one of the pioneers of the school project at Mt. Pulag, told us how he discovered the place. He had gone on a sabbatical, and a friend of his recommended he visit Mt. Pulag, while he felt well enough to do it.

On his first visit, he met Josie, one of the residents, who asked him if he could bring some chalk for the school. He did, with some Manila paper. Then another request came—this time, the teachers asked if he could bring a Philippine flag, since the one in the school was old. That they never asked for anything else touched Valencia so much he decided to return with the flag.

It was the turning point in his relationship with the community. He began to talk with the adults, and started bringing medical and dental missions to the community. When he decided to build the classrooms, though, he knew he had to ask for permission.

As Valencia shares, he told the community: “If we don’t have your support, we won’t do this anymore.” His offer was met enthusiastically, with the residents insisting that they help build the classrooms, and so they set out to work.

Almost a year later, he knows the place like the back of his hand, and the residents treat him as family. They even have a nickname for him, “Pultak,” which means bald.

According to Valencia, when the children first started calling him that, the adults were nervous. They thought that he would be livid, but he shrugged and laughed, knowing it was true anyway. They now had a name for their project: “Oplan Pultak Para Sa Mt. Pulag” was born.

With friends and newfound family, he helped build new classrooms and install solar panels at the school, which provided a sustainable source of power. The classrooms now have TV sets, a sound system, and a Mac Mini, for the students’ multimedia learning needs. With the help of laborers and the residents at Sitio Babalak, they were able to build the classrooms in just 35 days.

The work did not end there. With his belief that one cannot separate the education of the children from the livelihood of their parents, Valencia also set out to build partnerships to ensure more sustainable livelihoods for the children’s parents. One company hires high-school graduates from Sitio Babalak, while another buys produce from the farmers.

At Sitio Babalak, anyone who talks about the school has an unmistakable twinge of pride in their voice. The kids hang around the school as often as they could, and when asked about their school, they affectionately call it “7748.”  Valencia says they consider it their school’s address, and the term of endearment stuck, earning it a place on the school’s wall.

The work that was done to provide the students with an environment conducive to learning has paid off. The students recently took the National Achievement Test (NAT) and the results showed an increase in proficiency, another victory for the school.

The education they deserve

Two of the community’s elders, Manong Fred and Manong Leon, told me that one of the reasons they were determined to build the school was that it would finally give them the opportunity to offer their children the education they deserve, while keeping them close to home.

Until recently, the older kids had to travel far to be able to study in a high school. Not only did this mean being separated from their families, but it also meant that their parents had to pay for rent in dormitories. The kids from Sitio Babalak would also face discrimination from other children, who would refer to them as “taong bundok,” just because they lived so high up Mt. Pulag. This inevitably led to fights, with the youth of Sitio Babalak opting to drop out, because they felt discouraged.

That they were so intent on not letting the younger generation feel this way struck me, and I only admired them even more. I ended up chatting with them for quite some time; they were so easy to talk to, and as they shared their knowledge freely, I was charmed.

At the inauguration of the classrooms, the mood was festive. Then men played the gangsa, or their version of the gong, and the kids performed native dances. Families came decked out in different colors, while the children ran around in packs.

I suppose it was only right for the birth of a new school, of a refuge the kids could call their own. More importantly, there was also a sense of hope enveloping the place. The air was so thick with it that you could almost hold on to it, somehow. Then I realized that I could—it was there, on the walls, on the ground the school stood on, and on the faces of everyone present.

As the kids sang, danced and smiled, I felt that they understood what was happening that day. Because of the love, passion, optimism and determination of their elders, and of people like Valencia, they were able to build not just classrooms, but a solid foundation for a brighter future.

Hope has a zip code, and it is 7,748 ft above the sea—where the cool air greets you with a big, warm hug, and a smile.