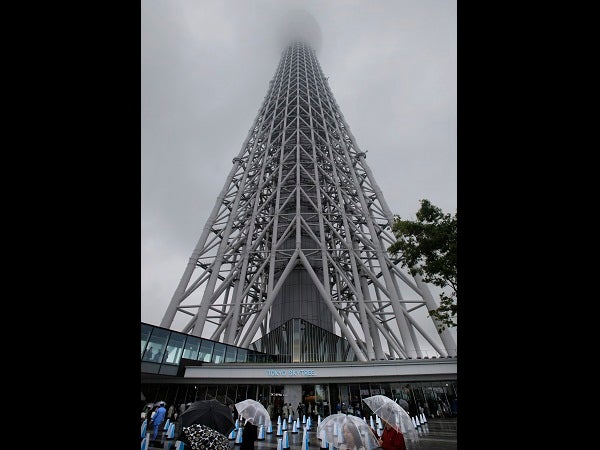 WORLD’S TALLEST. Visitors wait in front of the entrance of the Tokyo Skytree in Tokyo, Tuesday, May 22, 2012. The world's tallest tower and Japan's biggest new landmark opened to the public on Tuesday. AP/Itsuo Inouye

Nearly 8,000 visitors were expected to take high-speed elevators up to the observation decks of the 634-meter (2,080-foot) tower to mark its opening. Some reportedly waited in line more than a week to get the coveted tickets for a panoramic view, though Tuesday ended up being cloudy in Tokyo.

Skytree is recognized by Guinness World Records as the tallest tower, beating out the Canton Tower in China, which is 600 meters (1,968 1/2 feet).

The world’s tallest structure is Dubai’s Burj Khalifa, which stands 828 meters (2,717 feet). That’s in a different category because it’s a skyscraper, not a tower.

The Skytree will serve as a broadcast tower for television and radio, along with being a tourist attraction. It replaces the 333-meter-tall (1,092 1/2-foot-tall) Tokyo Tower — a symbol of Japan’s capital since 1958 — as the broadcast hub.