For something so simple, pasta is serious business | Inquirer Lifestyle ❮ ❯ 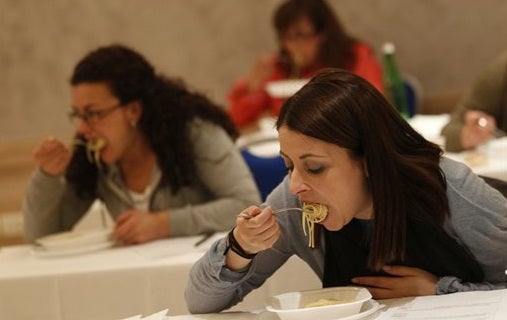 A group of women taste pasta in a hotel conference room in Rome, Friday, May 18, 2012. Pasta sales worldwide have grown steadily over the past three years. Pasta is serious business in Italy, and a recent blind taste test organized by the world's biggest pasta maker, Barilla, drove home that an awful lot of thought goes into making the simple combination of durum wheat semolina and water from which Italy's national dish is made. (AP Photo/Alessandra Tarantino)

For something so simple, pasta is serious business

ROME – They twirled, they sniffed, they slurped, they chewed.

The dozen housewives who gathered in a Rome hotel on a recent afternoon took their work terribly seriously, rating plates of pasta for chewiness, saltiness, gumminess or done-ness – that perfect balance known as “al dente,” or firm to the bite.

Pasta is serious business in Italy, and the recent blind taste test organized by the world’s biggest pasta maker drove home that an awful lot of thought goes into making the simple combination of durum wheat semolina and water from which Italy’s national dish is made.

“The simpler it is, the more testing it takes,” said Stefania Fochi, in charge of consumer testing for market leader Barilla, which organized the taste test.

Pasta sales worldwide have grown steadily over the past three years, to euros 22.3 billion last year, according to Euromonitor research. In Italy, however, sales have fallen steadily over that same timeframe as the economy suffers and stores are forced to offer discounts. National pasta sales dropped to euros 2.7 billion last year from euros 3.1 billion in 2009 – meaning spaghetti makers in these days of austerity need to try harder to keep their customers loyal.

Granted, in Italy, it’s not a huge challenge given that most Italians eat a plate of pasta – be it spaghetti alla carbonara, penne al ragu or orecchiette with broccoli – at least once a day. But they are terribly discerning customers: A noodle is not just a noodle.

“Some were sticky, some were good, al dente and cooked the right amount of time,” said Stefania De Rossi, a 46-year-old mother of three who was selected for the taste test because of her family’s daily pasta habit. “I liked the last one [identified only by its code name: V36]. It wasn’t super smooth, it was a bit rough but seemed better.”

Her pickiness stems in part from Italians’ particular obsession with food: Eating in Italy is taken very seriously on both a family and cultural level.

The Slow Food movement was born here and you can smell, see and taste this way of life at this time of year in outdoor markets, exploding with bundles of fresh asparagus now that the green and purple hills of artichokes have begun to wane.

And what better way to enjoy those asparagus tips than to sautee them in olive oil with bits of speck, a smoky cut of prosciutto, and toss the whole thing with a small mound of linguine?

“Pasta is truly the symbol, the emblem not just of Italian food … but the principal plate of the Mediterranean diet,” said Amelia Germoleo, vice director of the National Pasta Museum in Rome. “It’s profoundly rooted in the culture, the lifestyle, the ‘being’ of Italy.”

The museum, which is currently closed for renovations, seeks to enlighten visitors about pasta’s past, including the very Italian origins of dried pasta, the stuff that comes in packages and can be preserved, as opposed to egg-based fresh pasta that must be eaten quickly.

It turns out Marco Polo didn’t bring spaghetti to the West from China. Rather, Germoleo said, the earliest known origins of dried pasta date from 12th century Sicily. The Norman king of Sicily, King Ruggero II, instructed a geographer to write a book about all that was known of the world.

In 1138, the geographer, Idrisi, reported back that the settlement of Trabia, west of Palermo, was making a type of vermicelli that was “sufficient to provide not only for Calabria but also the Muslim and Christian territories, where numerous cargoes are sent by sea,” according a citation of the book in a museum publication, “Time for Pasta.”

“This debunks the myth that Marco Polo brought it from China,” Germoleo said. “Dried pasta is absolutely Italian.”

Agostino Macri, a food security expert at the National Consumer’s Union, said that pasta was in the “genome of Italians.”

“A good dish of pasta puts you in a good mood,” he said. But he cautioned against going overboard in consuming it, particularly with specialties like spaghetti all’amatriciana, a heavy dish using tomatoes and bacon-like pancetta that is common on Roman trattoria menus.

“It has a lot of calories,” he warned.

The pasta that was served to the blind tasters had none of that: simply spaghetti tossed with a dash of olive oil. Each of the five brands tested –Barilla, De Cecco, Gragnano and supermarket brands Coop and Conad – was cooked in 1 liter of water salted with 7 grams of sea salt for every 100 grams of pasta.

While each sample cooked, women in white lab coats and latex gloves handed out small packets of noodles as they appear in the package, giving the whole affair a sterile, clinical feel when most Italians would tuck into a plate of pasta around the dinner table.

The testers ran their fingers slowly over the slender sticks, caressed them, noted the flecks of brown on the golden strands of semolina and the slight roughness of the grain in their hands. And then they answered an 11-page questionnaire asking them how the color, thickness, smell, taste and texture appealed to them. The results aren’t for public consumption, Barilla said.

“For us the pasta is very important, especially for me,” Gabriella Brescia said after sampling her five dishes as she packed up and headed home. “I could give up everything except pasta.”