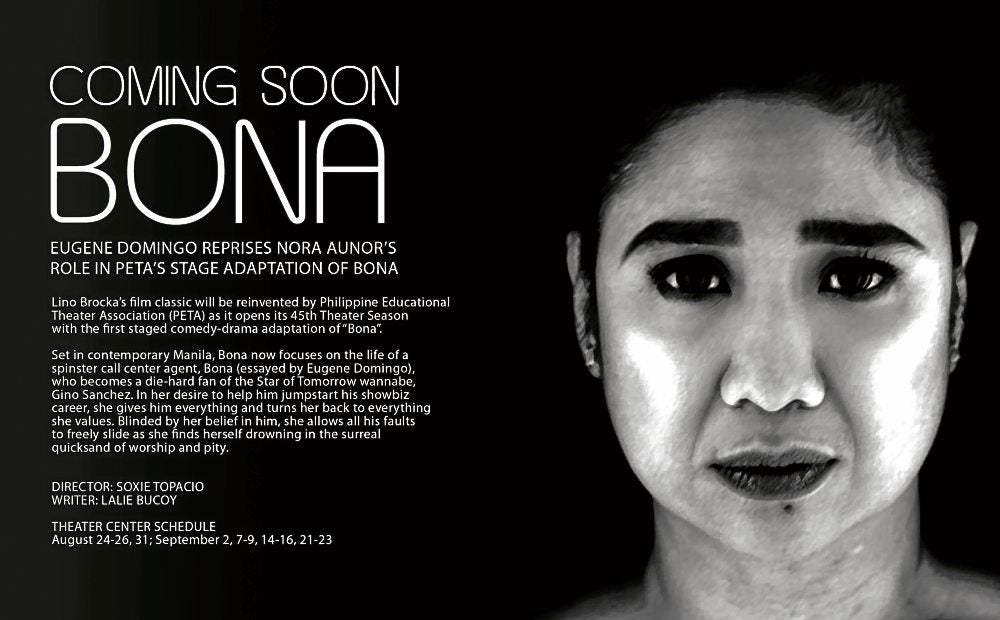 “We want to treat audiences to a unique experience of understanding and interrogating film through live theater performances,” says artistic director Maribel Legarda.

The season begins in August with “Bona,” a stage adaptation of the film of the same title, where a middle-class woman falls in love with a bit actor who abuses her.  Nora Aunor portrayed the titular character of the film written by Cenen Ramones and directed by National Artist for Film Catalino “Lino” Brocka.

TV and film comedy actress Eugene Domingo will portray Bona in this adaptation, where Bona is now a spinster call-center agent, to be directed by Socrates “Soxy” Topacio and written by Layeta Bucoy.

The season concludes in February 2013 with “D’ Wonder Twins of Boac,” an adaptation of William Shakespeare’s comedy of mistaken identities, “Twelfth Night.”

Translated by Rody Vera and to be directed by Legarda, “this will be a parody of how the Philippine film industry evolved in the ’60s and ’70s,” she says.

Both productions will be staged at the Peta Theater Center in Quezon City.

Building on this season’s thematic take on cinema, Peta has shows and events to complement its stage productions.

“Watch your favorite celebrities without the benefit of a second take, only  ‘take one’ performances,” Legarda says.

In November, the group will stage a concert version of “Himala the Musicale,” which was staged by Tanghalang Pilipino in 2003 and 2004, and based on the film “Himala” written by Ricky Lee and directed by National Artist for Film Ishmael Bernal.

The musical adaptation, written by Lee with music by Vince de Jesus and lyrics by both, is about Elsa, a young woman who claims to have seen the Virgin Mary during an eclipse and begins to exhibit healing powers.

In December, Peta will host a Cinemalaya Retrospective.  The Cinemalaya Philippine Independent Film Festival is held annually at the Cultural Center of the Philippines.

“We plan on featuring 10 of the best short and full-length films that have been shown in past Cinemalaya festivals,” she says.

Peta is also offering three of its previously staged productions for touring this year.

“William,” written by Ron Capinding and directed by Legarda, uses rap, hip-hop and flip-top along with music composed by Jeff Hernadez to show how a group of high school students deals with being forced to study Shakespeare and his works.

“One of the main objectives of the play is to present how these Filipino-speaking youngsters reconcile with Shakespeare’s English,” she says.

“Batang Rizal,” written by Christine Bellen and directed by Dudz Teraña, tracks the journey of a student named Pepito as he time-travels and meets Pepe, the young national hero José Rizal.

“Mga Kwento ni Lola Basyang,” written by Bellen and directed by Phil Noble with music by Noel Cabangon, features three of Severino Reyes’ stories: “Ang Prinsipeng Mahaba ang Ilong,” about a prince cursed with a nose as long as an elephant’s; “Binibining Tumalo sa Mahal na Hari,” about a maiden who earns the ire of the king of Tondo and endures three challenges that test her cleverness; and “Ang Prinsipeng Duwag,” about a prince who is ridiculed for his refusal to fight wars.