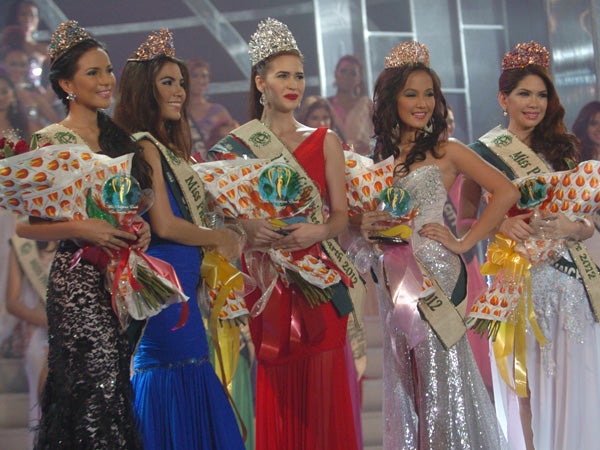 Lovelier the second time around is probably the best way to describe German-Filipino model Stephany Stefanowitz who bagged the Miss Philippines-Earth title on her second attempt, beating 46 other contenders in the fast-paced pageant held Sunday night.

Stefanowitz was a semifinalist in the 2010 national pageant, where she represented Butuan City. This year, she represented Quezon City in the contest held at the SM Mall of Asia’s Center Stage in Pasay City.

The 22-year-old Fashion Design and Merchandising graduate from the De La Salle-College of Saint Benilde was also proclaimed Best in Long Gown and one of the Best in Runway and Best in Styling.  She received her title from last year’s winner, Athena Imperial, who was proclaimed Miss Earth-Water in last year’s international competition held in the Philippines. Stefanowitz will represent the country in the global Miss Earth pageant in Indonesia later this year.

San Juan’s Samantha Purvor, a Sports Science major at the University of the Philippines, placed third and was crowned Miss Philippines-Water. She earlier bagged a lion’s share of special awards in various preliminary competitions: Best in Swimsuit, Gandang Ricky Reyes, Miss Extraderm, Miss Pontefino Residences, and Miss Zenea Slimming and Body Sculpting. She was also one of three contestants considered as Best in Runway.

The local search, now on its 12th year, gathers qualified contestants from all over the country as well as from overseas Filipino communities. Dubbed “beauties for a cause,” the winners become ambassadors batting for the protection of the environment and spearheading projects to help save the planet.

This year’s pageant adopted “sustainable energy” for its theme, in line with the United Nations’ declaration of 2012 as the International Year for Sustainable Energy.

Filipino representatives with foreign lineage have posted big wins in the Miss Earth pageant in the past. Canadian-Filipino Karla Henry bagged the top plum in 2008, while German-Filipino Sandra Seifert placed second in 2009 and was proclaimed Miss Earth-Air.

During the final question-and-answer round, pageant judge Grant asked what superpower Stephanowitz wished to have to save the earth.

The Quezon City representative replied, “Definitely, I would be a superhero with the power to clean up the whole environment. My advocacy is the conservation and preservation of our environment, not only for ourselves but, of course, for the future generations as well. As a citizen, it is essential for us to realize how today’s decisions affect tomorrow’s generation.”