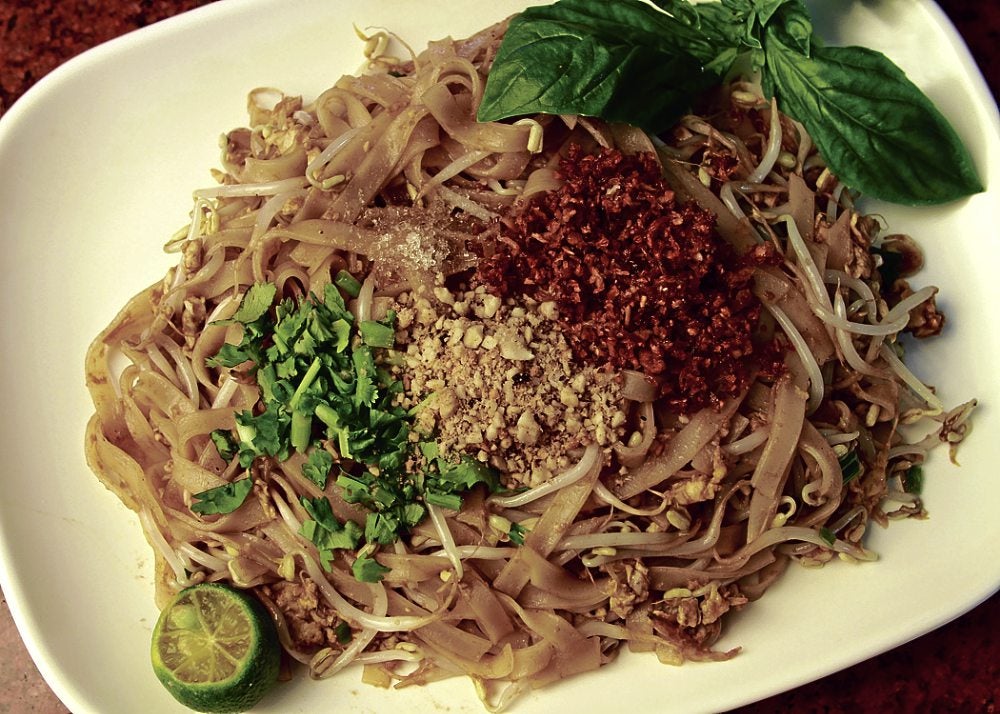 The stir-fried rice noodles were slightly sweet, and its meat was moist. Calamansi became an acidic counterpoint while the bean sprouts gave crunch and a clean taste.

“It’s loaded with protein, carbohydrates and fiber that make it a complete and balanced meal. From fancy restaurants to every street corner in Thailand, this dish is definitely a bestseller.”

Valero is the 21st franchisee of Sen Lek (which means “rice noodles”), the first Thai fast-food chain in the country. He observes that most Thai restaurants cater to a high-end market, but with Sen Lek at Market! Market!’s food court, he hopes to make the cuisine more accessible to the public.

Valero recalled that his first encounter with Sen Lek was tasting a soup at its stall in Cash ‘N Carry. The broth was tangy, with lemongrass, lime leaves and chili peppers, and subtle herbs with an addition of meat.  He thought it would be a good idea to get into the food business.

He met Sen Lek’s founder, Thai chef Suwan Bonchoo, who started a Thai restaurant along Airport road in the ’90s. The business did not thrive because Thai cuisine was still unknown to Filipinos. Likewise, they found the prices steep. Bonchoo then scaled down his business by selling noodles at Coastal Mall in 2000. He hit on the formula of popular Thai recipes at affordable prices.

Sen Lek’s soups have a distinct soup base with 14 secret herbs and spices. “No other soup has more ingredients,” said Valero. “It’s flavorful and not fiery. You may have it with wonton, meatballs or beef.”

The signature rice noodles are soaked for an hour to remove the starch flavor, then doused in oil or egg to remove the slimy taste. The noodle dishes are soothing, be it in sweet sauce, spicy gravy, or topped with vegetables and seafood.

Bonchoo said Sen Lek’s most popular dish is the Mixed Special of noodles, meatballs, wantons and the ever-present bean sprouts. The success is attributed to the aromatic stock.

“Pad thai (Thai noodles) is known to the world. Nowadays, Filipinos are getting to appreciate pad thai. They say ours tastes like the original mixture. Our tamarind sauce is homemade. We don’t use bottled sauce with preservatives. The other sauces supplied to the franchises are also made from scratch,” said Bonchoo.

Except for the tom yam, the  hot and fiery soup, everything else has a piquant taste. The tom yam was flavor-packed with Thai herbs, lemongrass and lime juice, as well as chili paste; the slices of seafood in it were juicy.

The green curry is recommended for those who like the flavor without the heat. It came with moist and tasty chicken fillet, string beans and eggplant, drenched in coconut milk and turmeric, balanced with a mound of rice.

For Filipinos who can’t eat a meal without rice, the fried rice dishes, or  khaw pad,  contain fillets of chicken or shrimp, laced with omelet, coriander and fried garlic. The dish has many variations, including a lively homemade red chili sauce.

Other secret seasonings are stirred in with the ubiquitous nam pla (fish sauce from Thailand). Then the dish is plated and served with cucumber, egg, broccoli leaves, tomatoes or sprigs of green onion for color.

The papaya salad is packed with the flavors of tamarind broth, lemongrass, lemon juice, carrots, tomatoes, and a host of other spices.

“It’s similar to the native achara but without the excessive sweetness,” said Valero.

The crispy catfish with mango salad, called yam pla-duk fu, is crunchy and mildly sweet and sour with variations of vegetables, topped with crispy catfish and flavored with onions and coriander. The fluffiness of the meat, the tartness of the green mangoes and the pungency of the onions meld exquisitely in this popular dish.

The dishes are accompanied with Thai iced tea with its exotic flavor, combined with milk for richness.