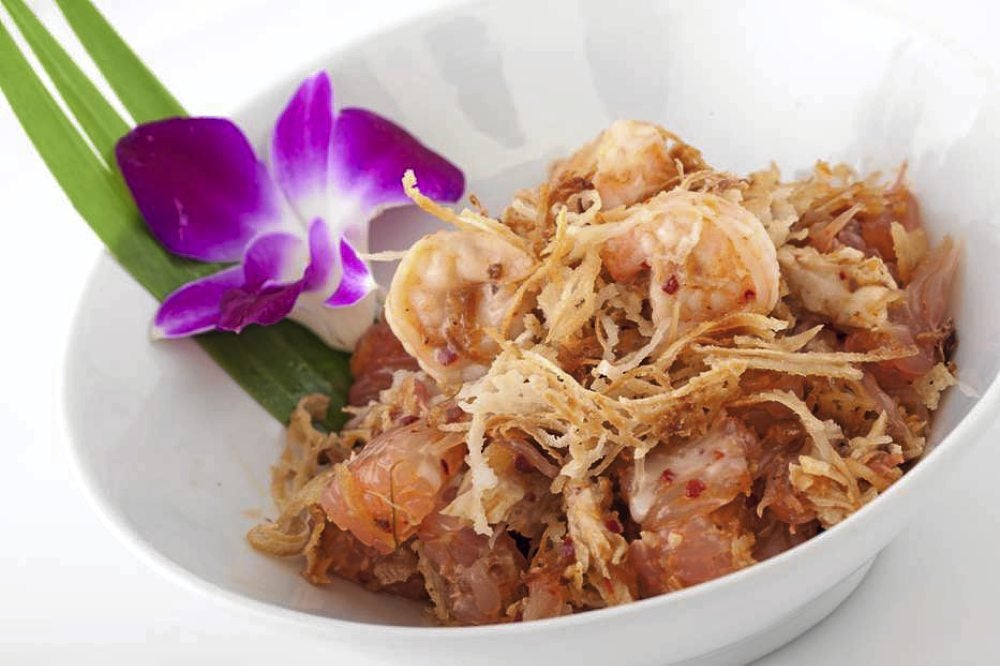 YAMSOM-O: A salad of refreshing greens with pomelo

One need not go as far as Thailand to experience the rich cuisine this exotic destination has to offer. Instead, make your way to this gem of a restaurant in the heart of Morato in Quezon City. This glass house glows invitingly, perfect for those wanting to enjoy a relaxed, even romantic, meal in a beautiful setting.

Thaipan features one of the best Thai cuisines the Philippines has to offer. An authentic house from the ’60s was modified into a glass house, the structure and layout preserved. It is reminiscent of a greenhouse-turned-beach house, with a patio deck situated at the entrance with gorgeous wire lanterns throughout the restaurant.

The interior design is by Ivy Almario, whose work in Romulo’s Café is echoed in Thaipan’s monochromatic brown and white motif. The geometric patterns and the clean outlines of white give the right amount of sophistication, a prelude to the resto’s topnotch meals.

After soaking in the dainty details, I was eager to get a taste of what this pretty restaurant had to offer. I started my meal with the sample platter (Khong Waang Thai, P340) which consisted of chicken satay, deep-fried spring rolls, crispy shrimp pastry and grilled pork wrapped in betel leaves. It also came with three kinds of sauces that went well with all of the fare.

What stood out were the chicken satay and the pork wrapped in betel leaves because of the juiciness of the meat, which most Thai places tend to serve dry.

Next were the Catfish Salad (Yam Plan Dook Foo, P290) and the Pomelo salad topped with shredded pork (Yam Som-O, P310). Despite the two being both salads, they complemented each other since the Pomelo salad was sweet to the Catfish salad’s salty. If you are like me, it nicely served as a “layover” dish—something I would go back to eating in between sampling other dishes.

I anticipated the Tom Yum soup since this tends to make me judge the quality of a Thai restaurant, whether they are successful with this dish. I was curious when it arrived because the soup was thicker in consistency. Though not normally done, the soup was simply a creamier version due to coconut milk, and I was pleased that it was more generous than most Tom Yum soups when it came to shrimps and mushrooms.

The kaffir leaves and lemongrass were so distinct. It’s deliciously spicy, but the resto can adjust to make the soup as mild or as hot as you can handle it.

Neutralizing the Tom Yum was a pork and vegetable dish (Phad Phak Ruam, P220) made of fresh Chinese kangkong topped with lechon kawali. Don’t let the simplicity of the dish fool you because this pairing is well-thought-of. The lechon kawali is coated in a light breading that made for an extra-crispy experience. The veggies were cooked just right and lightly seasoned, a respite from distinct Thai flavors.

The feast was far from over, however, as the stars of the menu made their way to our table. The Pad Thai (P310) was definitely eye-catching, with the noodles served in a net-like creation made of flour and eggs. Then came US Beef Tenderloin in Curry (Phanaeng Neur Yang, P360) paired with seafood fried rice with nuts and pineapples (Khao Phat Sapparot, P240). The curry sauce was so creamy and chunky that the sauce alone blew me away, even without the tender beef strips.

When the Chicken Pandan (Gai Hor bai Toey, P360) came, I was almost afraid that anything after the curry would be lackluster, but was happily proved wrong. The chicken was delicately infused with the pandan flavor and was juicy, tender and everything a chicken pandan dish should be.

Each of the dishes could serve three hungry people, with enough rice for second (or even third) servings.

After having such spectacular dishes, the dessert was something to look forward to and it did not disappoint. If you like tapioca cake, I suggest you order the Ta Koh Sakhoo (P160) ahead, since it takes 20 minutes to prepare these five pieces from dessert heaven.

The cake is so fluffy—more of a pudding in its consistency. Nevertheless, it deliciously dissolved in my mouth and had water chestnuts sliced so small that it sneaked up to give you added texture. As the tapioca dissolved, tiny, chewy tapioca pearls lingered for a finale.

I could not resist tasting as well a future dessert offering. The Thaipan Honeycomb’s Nest is a work of art—a golden brown “nest” made of sweet potato that contained a scoop of homemade coconut ice cream. The sauce pooled underneath it looked like caramel at first glance, but was really coconut milk with molasses, more popularly known as latik in Filipino cuisine. The ice cream was rich and made for a sweet ending to the night’s extravaganza of Thai cuisine.

For business events or big parties, Thaipan has Wi-Fi and equipment ready to serve your audiovisual needs. The restaurant seats around 125 to 150 guests and can work with customers to customize their event menu.