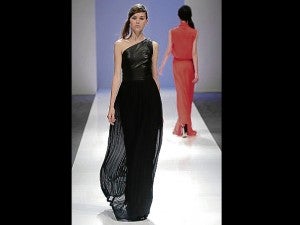 As the Asia Fashion Exchange (AFX) takes center stage once again, Singapore, with its “rich multicultural DNA,” transforms into the “ideal destination for the global fashion fan hoping to get a taste of Asia and its many dimensions.”

AFX was launched in April 2010 and is now on its second year. “This year, we put in a lot of effort and resources to market AFX… There’s a lot of publicity on it and that has been translated into the demand for the events, which are mostly oversubscribed,” said Ranita Sundramoorthy, director of attractions, dining and retail of the Singapore Tourism Board.

Running last May, AFX consisted of four main events: Blueprint, a trade show that brought the world’s buyers and design talents in Singapore to do business in Asia; Asia Fashion Summit, a premier business conference that generated thought leadership content and insights on fashion topics for industry professionals; Audi Fashion Festival, an international fashion festival that brought together iconic international designers, labels and supermodels such as Tao Okamoto; and Star Creation, an Asia-wide fashion design competition to spot budding talent. 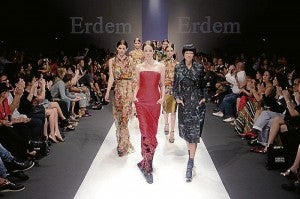 “For a lot of young designers, Star Creation is very important because it’s an opportunity and a platform for them to actually showcase what they have and, hopefully, make it to international retail,” said Sundramoorthy.

She added, “Likewise for Blueprint, because we bring in top buyers from around the world, those who already have their own line can showcase what they have.”

But to Sundramoorthy, the Audi fashion fest was the highlight. 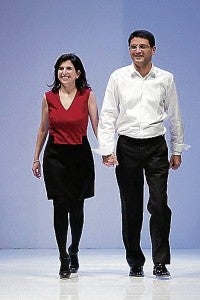 “What’s interesting about the fashion scene in Singapore is that because we’re multicultural, we actually embrace all the different cultures, which is why we’ve become the hub for the whole of Asia,” said Sundramoorthy.

Lee agreed: “For the Audi Fashion Festival, we usually try to choose designers who are very inspiring and innovative. There’s always that mix of new, exciting, dynamic and cutting-edge with something very classical, glamorous and elegant.”

This festival started with a bang with Missoni as its opening show. Gracing the show were Angela, Vittorio and Margherita Missoni.

Antonio Berardi, who chose to edit out some pieces in his collection, which was “romantic on the one side, and tailored, hard and ‘British’ on the other,” notes “I thought for the first time I showed in Asia, it’s good that people actually see real things that they can wear and they can feel that they understand.”

For Odile Benjamin, who, aside from her husband Douglas, is the creative director of Raoul (one of Singapore’s most commercially successful and recognized labels in the world), “It’s a global world so there’s really no such thing as an Asian brand or a European brand… We’re in a different era where things become global and quite pulled together.”

Her collection, which was inspired by the glamorous airline girls like those from Pan Am and Braniff of the early ’60s and the late ’70s, featured some color-blocking, architectural cuts, graphic pieces, and fluorescent and monochromatic hues. 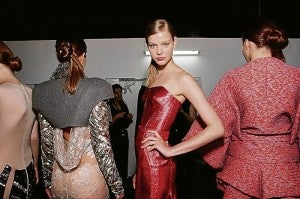 Closing the festival was the Emanuel Ungaro show, with recently appointed creative director Giles Deacon. “We wanted to bring a new kind of edge to Ungaro. Everyone’s familiar with the super feminine, which of course it is… but we want to kind of push the technology,” said Deacon.

Though his collection definitely revamped the delicate silhouettes, mix of patterns and vibrant colors the fashion house is known for, he noted, “We’re still using certain feminine touches such as the drapes and the softness of fabrics, but it’s finding a new vocabulary for it. It’s not just having that one story [because] I think people have lots of facets to their characters and lives.”

One of the collection’s highlights is the unique embroidery on the frocks, which juxtaposed ladylike with edgy. “We call them ‘Scooby Doos.’ We wanted to bring a new element to the embroidery. We made sure we had lots of metallic and leather embroidery,” said Deacon.

Of designing for Asian women as opposed to European women, Deacon explained, “I think that for women across the world, if something is nice and it’s got the quality you’re looking for, it speaks wherever you’re from. I don’t see Asia as a separate entity. I find that quite a dated concept. Asia’s super-modern. It speaks for itself. We’re all within the same globe.”

Other designers and brands that showed their A/W 2011 collection were Erdem by Erdem Moralioglu, Swarovski, Tiffany & Co. with fashion by The Link, Greyhound with creative director Bhanu Inkawat, alldressedup and Francis Cheong. 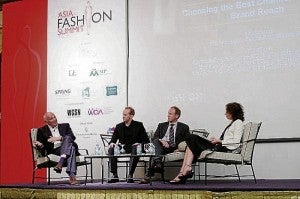 Looking to the future of AFX, Sundramoorthy said: “Over the next three to five years, we want to build up the Asian component.”

As AFX is hoping to bring in more Asian participants and internationally recognized Asian designers, Lee noted, “You can expect the A-list names again but the international Asian names should definitely be bigger and better.”

“We’re bringing out that awareness that Asia has a unique niche,” said Lee.

She added, “I think the future of fashion in Asia is very bright because the world is looking to Asia right now… Asia is becoming relevant, so you’re really dressing the world.”