A late breakfast at Kinabuhayan Café, woman paddlers in Lake Pandin –wonders at the foot of Mt. Banahaw | Inquirer Lifestyle 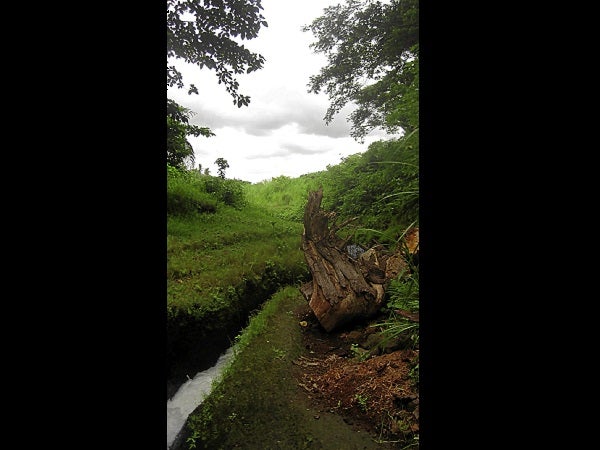 A late breakfast at Kinabuhayan Café, woman paddlers in Lake Pandin –wonders at the foot of Mt. Banahaw

Mt. Banahaw’s peak has been closed off to climbers and devotees for some time now, allegedly due to unchecked pollution and increased impact on the mountain. However, there are still trails below the peak that remain open to the public.

Along these trails, one can find religious sects and holy landmarks, pilgrims and divine artifacts, ultimately leading writers and travelers to include “mystic” in their descriptions of the mountain.

Mount Banahaw hovers above the busy city of San Pablo, visible at nearly every point. It served as a mighty backdrop to our cups of brewed coffee at Café Lago, where we sat facing the beautiful Lake Sampaloc. I still couldn’t believe we were only two hours away from Makati.

“What are we doing for the day?” I asked B, and we consulted our pamphlets from Casa San Pablo.

“We could rent bikes and ride around Sampaloc Lake, or go to Lake Pandin and have lunch on a raft, or drive to Dolores, and see Kinabuhayan Café as we initially planned,” B answered.

So many wonderful options, and all of them precluding the Internet. The two giant dogs by our feet looked approvingly on.

Dolores, in Quezon, is a few kilometers away from San Pablo in Laguna. Dolores is usually the jump-off point for climbing Mt. Banahaw, regarded as a “holy mountain” by many. We decided to drive towards the mountain, and grab a late breakfast at Kinabuhayan Café.

We drove down a long stretch of road, where the electric posts have curious rainbow stripes on them, and every now and then, young men and women stopped us with overturned hats and empty cans of milk, asking for donations. The town fiesta, apparently, is coming up.

After a few confused turns, we came upon a house with a giant treehouse on the front, indicating we had arrived.

A group of French guests was just leaving. Jay, the café owner, was telling them how to get to the footprint of Jesus. I’m not entirely sure what that’s all about, but from what I understood, they can partake of holy water either surrounding the footprint, or flowing from the footprint. I would have to remember to see that one day.

Jay rustled up some breakfast for us: Mushroom risotto, fried egg, and seriously delicious breaded meat and veggies (Each meal at Kinabuhayan costs P750; have three meals and you get to stay the night for free).

He also whipped up two glasses of thick mango puree and a dessert bowl of melons and cream with edible flowers. B and I, who up to that point had been squabbling over the type of stuff people who have been traveling together for days squabble about, immediately forgot why we were squabbling. We fell asleep inside Jay’s treehouse shortly after.

Though the main attraction in Dolores is no doubt a trek up Mt. Banahaw or its supposedly twin mountain, Mt. Cristobal, there are several alternatives, especially for people who come in their rubber slippers. Jay’s nephew, Rex, guided us towards several nearby streams leading to a small but powerful waterfall. Around us, carabaos lounged and women washed their hair by the banks. It might have been an Amorsolo study, except for the quarrying activities happening just beside it.

We then headed to Lake Pandin to see the local women’s tourism initiative. They earn their living by ferrying tourists across the lake. A ride costs P180 each, and P360 with a meal of tilapia, shrimp in gata, pako salad, bananas, and buko. Simple fare, but to eat in the middle of the green, glassy lake, between the idle chatter of two women with paddles, gusts of wind coursing down the mountain and through the trees, makes it more than worth it.

At the other end of the lake is a grotto, with religious statues resting on niches of rock. We stopped for a while, and the women filled their drinking bottles with water from a tree’s roots. I finally jumped into the lake. The women assured me only tilapia, catfish and other harmless, toothless creatures dwelled in its waters. That did little to assuage my hyperactive imagination, but the water was magnificent.

On the way back, the women computed the days’ earnings and told us they were appearing on “Showtime” the next day. They were busy paddling, so I volunteered to answer a text message from one of the women’s daughters. The daughter was asking her mother if they had a lot of guests for the day, and subsequently, if she, the mother, earned a lot, and if she, the daughter, could ask for some of the day’s earnings.

I wanted to go back into the water one last time, but the sun was about to set and we needed to look for a place to stay. We greeted the women “Happy Mother’s Day” and drove back to San Pablo.

We stopped by Sampaloc Lake and watched people, clad in their Sunday’s best, go about their lives. I wondered if they knew just how amazingly beautiful their city is.

B and I stayed our last night at Tahanan ni Aling Meding, a mansionette-of-sorts turned hotel overlooking the lake. We were exhausted, but too hungry to fall asleep. All the restaurants that appealed to us were unfortunately closed, but we remembered there was a 24-hour Jollibee branch somewhere. We remembered particularly because of the way its 24-hour sign obstructed the view of Mt. Banahaw.

We left at 10 a.m. the next day. Somewhere along San Pablo’s highway, we found an audio mechanic who effortlessly fixed our broken radio for us, at a fraction of Manila’s prices. We sang along to mindless pop tunes and ate watermelon and unbranded buko pie purchased along the street. A couple more hours later, our slow transformation back to the present was completed.