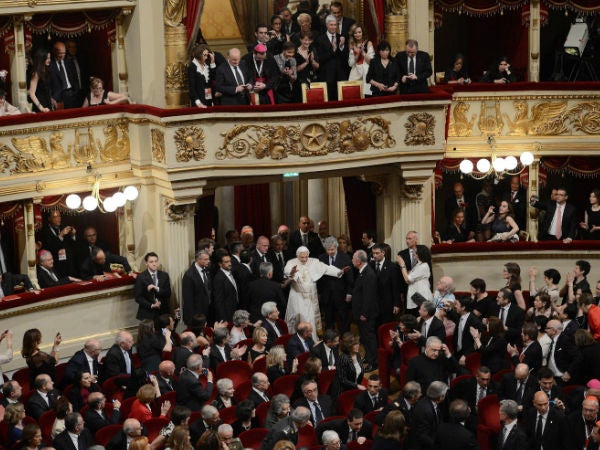 Pope Benedict XVI salutes attendees at the end of a concert at La Scala theater in Milan, Italy, Friday, June 1, 2012. Pope Benedict XVI greeted the faithful in the square outside Milan's cathedral after his arrival Friday afternoon for the seventh World Encounter of Families, a welcome pastoral respite from an embarrassing and damaging leaks scandal at the Vatican that has engulfed the pontiff's personal butler. Then, a concert at the nearby La Scala theater will be followed by a private prayer inside the cathedral with a special focus on the victims of the twin temblors that rocked the Emilia-Romagna region last month. (AP Photo/Daniel Dal Zennaro, Pool)

MILAN — Pope Benedict XVI praised the performance of Beethoven’s Ninth symphony on Friday evening at Milan’s La Scala theater as “a moment of elevation of the soul.”

Benedict’s three-day trip to Milan for events focusing on the institution of the family is a welcome pastoral respite from an embarrassing and damaging leaks scandal at the Vatican that has engulfed the pontiff’s personal butler.

In contrast to the strains at home, the pontiff was welcomed by tens of thousands of cheering well-wishers in the square outside Milan’s emblematic Cathedral earlier Friday and received a standing ovation when he entered La Scala.

The pope, an accomplished pianist known for his keen appreciation of music, sat raptly in a seat placed specially in the main aisle of the orchestra section from the famed opening bars of Beethoven’s Ninth through the third movement exploding with “Ode to Joy.”

He joined in a standing ovation for conductor Daniel Barenboim, the orchestra and chorus, then walked to the stage and through the orchestra to the conductor’s pit to address the audience, filled with cardinals, bishops and delegates from the Seventh World Meeting of Families.

“It is not a distinctly Christian joy of which Beethoven sings, rather of the joy of coexistence of the people, victory over egoism,” the pope said.

The pontiff thanked Barenboim for his choice of music because “it permits us to launch a message with the music that affirms the fundamental value of solidarity, of fraternity and of peace.”

Afterward, the pope went backstage to greet La Scala’s performers and workers, before heading to the nearby Milan Cathedral for a prayer and Eucharist celebration focused on the victims of the twin temblors that rocked the Emilia-Romagna region last month.

Barenboim called the pope’s attendance at the concert “a great honor for our theater.” Benedict was attending his first concert in a public theater since becoming pontiff, and is the second pope after his predecessor John Paul II to attend a performance at La Scala.

“It is not an obligation that the pope comes to La Scala,” Barenboim told reporters Friday.

The pope’s presence demonstrates that La Scala “is an important cultural institute” and that “one of his preoccupations is culture,” Barenboim said.

Barenboim, who is La Scala’s music director, said the choice of Beethoven’s Ninth was an easy one, noting that it is one of the most accessible pieces written for an orchestra and choir.

“We needed to find an important piece. We can’t play something frivolous for the pope,” he said.

Weekend events focusing on families include a meeting at Milan’s San Siro stadium on Saturday with youths who recently received the sacrament of confirmation, and an open-air Mass expected to attract 1 million followers on Sunday.