In a cellar near Broadway, a nightclub is born | Inquirer Lifestyle ❮ ❯ 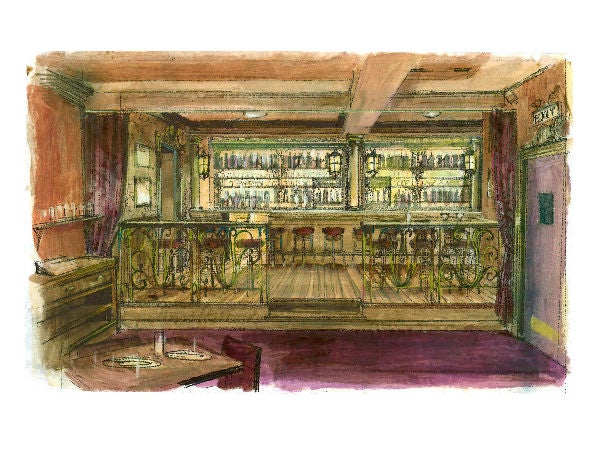 In a cellar near Broadway, a nightclub is born

NEW YORK — In a dusty room near Times Square, set designer John Lee Beatty is putting the finishing touches on his latest project.

It’s not one of the prolific Tony Award winner’s typical jobs, the kind that have enlivened such shows as “The Color Purple” or “The Royal Family” or “Talley’s Folly.” It’s not a stage set, per se.

It’s not even above ground.

Beatty is standing below the one-time notorious Studio 54 disco in the building’s cellar, which is being turned into a swanky nightclub and restaurant called 54 Below. Just as when he builds his sets, he’s typically hands-on.

“I woke up last night, sat up in bed and worried about claret red,” Beatty says, laughing amid the drone of buzz saws and hammering. “It’s very personal. It’s a personal experience.”

If anyone can transform a smallish basement on 54th Street into a destination spot, it’s Beatty, who has been nominated for his 14th Tony this season for creating the chic set of “Other Desert Cities.”

He’s having help from plenty of Tony veterans: Ken Billington, who won one for “Chicago,” is doing the lighting design, and Peter Hylenski, twice nominated for “The Scottsboro Boys” and “Rock of Ages,” is in charge of sound design.

Scott Wittman, who wrote lyrics to the songs in “Catch Me If You Can” and “Hairspray” on Broadway and “Smash” on TV, is the creative consultant, charged with turning the space into what backers hope will become “Broadway’s living room.”

“I think it’s a nice hang,” says Wittman, who plans to make one of the banquettes a base for nights of Damon Runyon-esque musings. “This is where I’ll be. And where I go is where the magic happens.”

During a recent visit, aged-looking moldings were going up at a fast pace and Beatty was ensuring the various layers of paint were producing the right shade of cigarette smoke-meets-bawdy. Antique mirrors, sconces and old-timey photos of gangsters and Follies girls were yet to be added to the walls.

“We want to attract the stars and the chorus people even from all around. We want them to hang out here and make this their lounge and their hangout area,” says Grant A. Rice, the representative for the owners, Tony-winning producers Tom Viertel, Marc Routh, Richard Frankel and Steve Baruch.

The space has been unused for years and, according to designers, showed evidence of some sketchy times — or at least some bad wallpaper. Upstairs had been a wild, coke-fueled nightclub in the 1970s and then became a TV studio. It had been vacant for years until The Roundabout Theatre Company moved in 1998 and turned it into a Broadway house. (Roundabout has no connection with 54 Below.)

Accommodating 144 people in the dining room — and 14 at a bar area — the nightclub will offer dinner and live performances on an intimate stage. The distance from the stage to the farthest dining seat is only 24 feet (7.3 meters), an intimate experience backers hope will lure artists from Joe’s Pub or Feinstein’s at Loews Regency. “You’re going to have a very communal experience with the performance,” says Rice.

Patti LuPone will officially open the venue on June 5 with a two-week stand. Other Broadway stars scheduled to perform include Brian d’Arcy James, Christine Ebersole, Jackie Hoffman, Victor Garber, Megan Hilty, Linda Lavin, Sherie Renee Scott, Leslie Uggams and Ben Vereen. The cover charge will range from $15-$70, and each ticket has a food and beverage minimum.

Hoffman, an actress and stand-up comedian who was last on Broadway in “The Addams Family,” will hit the 54 Below stage on Sunday and plans jokes and songs that will, naturally, make fun of being in a basement. She welcomes the new space.

The executive chef is Andre Marrero, a veteran of Per Se and a former chef at L’Atelier de Joel Robuchon. He says his bistro menu will be contemporary and market-driven, using high-end ingredients — like foie gras, caviar and lobster — but pairing them with more humble items, like pasta or a burger. There will be a pre-theater full dinner and smaller plates with lower price points.

“We’re integrating the whole experience and trying to make it completely seamless,” says Marrero. “There is a disconnect at some other places that we want to make sure we avoid.”

Above all, there will be no kitschy vibe or, as Rice says, “no theme park-ing it up.” Though cocktails will be of the era, bartenders will not be required to wear suspenders or grow handlebar mustaches. There will be no cutesy named dishes, like “pate LuPone.”

“We’re trying to stay away from anything thematic, so to speak,” says Rice, who hopes the space will attract theater’s creative types and spark future collaborations. “There are lots of places where you can hang out. But this is specifically meant for this community.”

54 Below is the seventh restaurant that Beatty has designed, and he says the collaborative nature of the theater helps with big projects like this one. But he has certain requirements before he starts working, and one of them is that the project backers give him a story for the space.

“I’m a theater designer, so I can’t do it without motivation. I’m like some pathetic actor,” he says, laughing. “They thought I was nuts but I made them to write a back-story so I knew who I was designing it for and why.”

So the backers came up with a story about a bootlegger who gets dragged into show business against his will because he’s opened an illegal speakeasy and ended up with entertainment.

“I actually have to hear the whole story so I can get revved up to know what moldings to pick out,” says Beatty. “I can’t just do pretty. I don’t know how.”