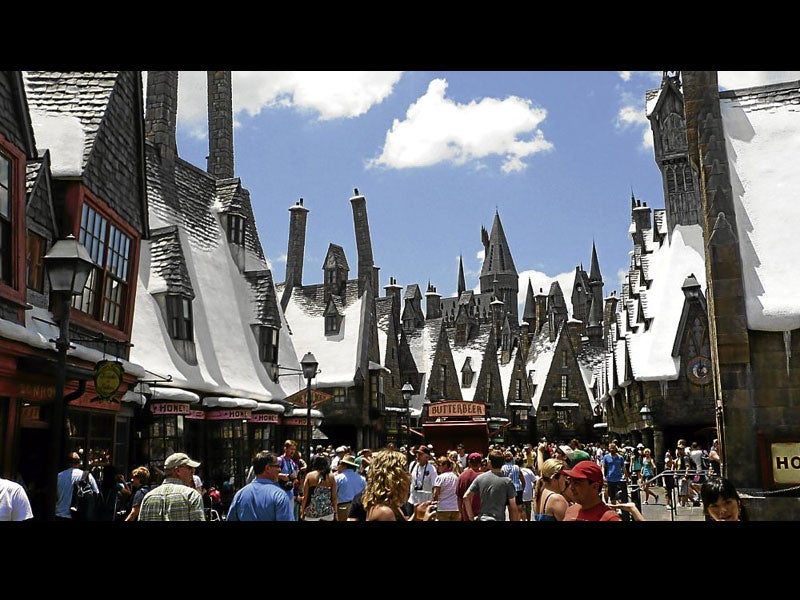 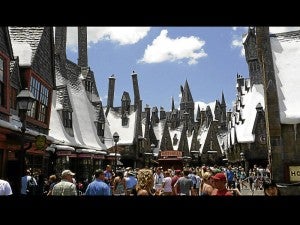 I was recently in Orlando, Florida, to cover a weeklong technology conference that was so amazing, overwhelming, and rife with suits and neckties that by the end of each day I’d literally collapse on my bed.

On the afternoon of day three, we were told our interview with a big business leader had been cancelled, which meant—collective gasp here—four hours of free time.

Most of us attendees took this opportunity to take a nap, get a massage, storm the hotel buffet, or revel in what is likely the world’s most beautiful infinity-edge pool (we were in a resort). I had other plans.

Ideally you’d want to spend more than four hours in The Wizarding World of Harry Potter, where an entire town has sprung from the pages of J.K. Rowling’s books and your own imagination. If time wasn’t a constraint, I could’ve easily spent those four hours just staring at the snow sitting on the rooftops of Hogsmeade village—snow that looked so real it melted under the scorching summer sunshine.

Or, I could’ve spent those four hours just sitting on a corner of the Three Broomsticks, the Potter-popularized pub that serves Shepherd’s pie, fish and chips, strawberry-peanut butter ice cream, and chocolate cauldron cakes. 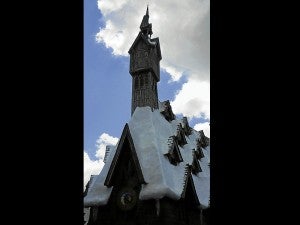 The Wizarding World of Harry Potter is filled with such little momentous experiences, and somewhere in the middle of it all—that moment when you realize that magic is real and your imagination has not failed you—is the most gratifying theme park you will find yourself in.

The entire experience is bracketed, literally and metaphorically, by an adequate dose of craziness, loopiness, and complete abandon. It is a place where question marks swarm alongside the endless crowds of Pottermaniacs.

Is the two-hour-long waiting time to get inside Ollivanders Wand Shop worth it? (Absolutely.) Is hearing Moaning Myrtle’s ghostly squeals while you answer the call of nature in the men’s restroom a cool, inspired touch or just plain freaky? (The latter.)

Guests are welcomed to Hogsmeade by the swirling steam and iconic whistle of a recreated model of the Hogwarts Express. Beside it is The Owl Post, an actual post office where you can send postcards authenticated by the Hogsmeade stamp.

Step out of the Post and before you appear winding rows of shops: Honeydukes Sweetshop carries a disarming array of sweets from the Potter universe—from Chocolate Frogs to Fizzing Whizzbees, treacle fudge to Bertie Bott’s Every-Flavour Beans. 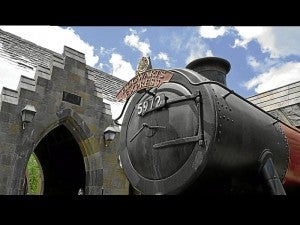 Nearby is the Dervish and Banges store, which sells all sorts of Hogwarts merchandise and Quidditch wares. There’s Zonko’s Joke Shop, filled with Weasley bros-approved trick toys like Sneakoscopes and extendable ears. Harry Potter souvenirs and movie props are available at Filch’s Emporium of Confiscated Goods, named after Hogwarts caretaker Argus Filch.

Then there’s Ollivanders, heaven for young aspiring wizards, hell for their exhausted parents. Guests are only admitted in groups of 20, so expect a long waiting time. Inside, however, awaits a true Potter experience: a wand keeper selects a random child to test different wands until the “right” one is found. After the ceremony, everyone is led to a store where souvenir wands are yours to keep for $28.95 a piece.

Yes, prices aren’t exactly cheap—a piece of Chocolate Frog in Honeydukes sets you back by $9.95 (sans tax) while a tiny Gryffindor pin costs the same; a Hogwarts robe is $99.99 and a Firebolt broom is a vicious $300. (A Gringotts Bank ATM has been strategically placed in a nearby alley.)

The park has two dining options: the aforementioned Three Broomsticks that serves traditional British fare, and the Hog’s Head Pub where alcoholic drinks are available. The pub serves—fresh off the tap—the two most popular drinks in Rowling’s world: Butterbeer, a nonalcoholic butterscotch cream soda that comes in either regular or frozen form (I downed four in those four hours), and Pumpkin juice, which tastes like apple cider with a hint of pumpkin. 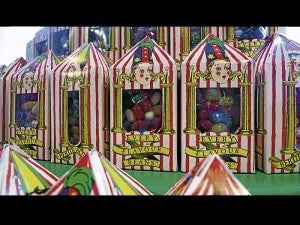 Then there are the rides. There are but three in the 20-acre Wizarding World—two of which are nice, cutesy attractions that soar on the strength of novelty, not honest-to-goodness thrills. The first is the Dragon Challenge (a homage to the first task of the Triwizard Tournament), where two dueling high-speed roller coasters run in opposing directions, creating the impression that they may crash. On the way to the ride you’ll see “relics” like the Triwizard Cup and the Goblet of Fire.

The second is the Flight of the Hippogriff, a kid-friendly roller coaster that spirals and dives around a pumpkin patch and even swoops past a life-sized replica of Hagrid’s hut.

The park’s prime attraction is the Harry Potter and the Forbidden Journey, located in Hogwarts castle, a magnificent granite structure that looks so authentically old, you’d think it’s been there for centuries. Inside, guests walk through the castle’s hallways and corridors where talking portraits line the walls.

You’ll enter Dumbledore’s office, an exact replica of the one in the films, where the headmaster himself makes an emotional appearance in the form of a hologram. Then you meet Harry, Ron, and Hermione inside the Defense Against the Dark Arts classroom. (I was told queuing time reaches up to five hours during peak season. Fortunately it only took half an hour when I was there. The castle tour, which distractingly snakes for what seems like miles, was made for the wait.)

Finally, you’ll board enchanted benches that soar above the castle grounds. Throughout the phenomenal four-minute CGI journey, you’ll play in a Quidditch match, encounter the Whomping Willow, and come face-to-face with Dementors. The last few seconds of the ride (which I refuse to give away) brought tiny tears to my eyes and to those of my three seatmates, one of whom happened to be a middle-aged dad. 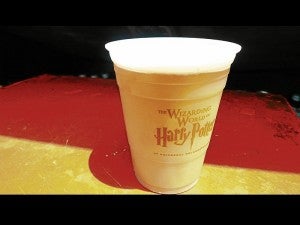 It was exactly 6:30 in the evening when I finished my third and last go at the Forbidden Journey, and when I realized my four hours were up. I had to run back to the conference for a dinner meeting.

I was 12 years old when I opened my first Harry Potter book (although I like telling people I was 12 and ¾, for the sake of spectacle), and it took another very long 12 years for me to see it come to life. In the hundreds of Muggles that entered the park that day, perhaps I was one of the very few that came all alone. I didn’t mind it at all. It was intimate, just right for an experience so amazing and overwhelming.

My night at the Wizarding World of Harry Potter ended in front of the Hogwarts Castle, watching smoke filtering through and from its towers. A few meters from where I stood, members of the Hogwarts Choir serenaded us one last time. At the end of their sweet song, a young girl near me—age 8 or 9 or 9 ¾ and dressed in a Hufflepuff robe—turned to her parents and dolefully asked, “So, is it over?”

* Universal’s theme park staff worked closely with the Harry Potter film crew, particularly its production designer and art director, to such extent that elements originally created just for the theme park were incorporated into the more recent film sets.

* To create the authentic snowdrifts on Hogsmeade, the park’s designers studied images of the winter landscape in northern Britain.

* J.K. Rowling checked on all details big and small, including the font used on the restaurant menus.

* In concocting the perfect recipe for the Butterbeer, the park’s staff experimented for weeks then flew all the way to Scotland, where they rented a hotel kitchen to recreate the beverage for a taste-test with Rowling.